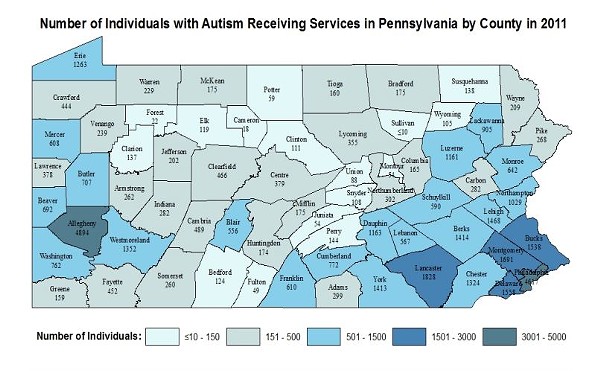 
A new census released today shows a dramatic rise in the number of people with autism who receive services from the state — and for the first time collected justice system data that shows significant increases in the rate of contacts young people with autism had with law enforcement.

The report tracks people with autism who receive state services, a number that has roughly tripled since 2005, reaching 55,830 people by 2011 — the latest year included for which data was available. But since there are plenty of people who don't receive services, it's estimated there are an additional 130,000 people with autism in the state not counted in the report based on CDC figures that show 1 in 68 children are diagnosed with autism.

The new census is an update to the 2009 Pennsylvania Autism Census Project, the first effort of its kind to systematically track information about the state's population of people with autism.

Lindsay Shea, the report's lead author, says that while the increases are striking, "We know where they are and we can start to form partnerships to meet their needs [...] People are really starting to pay attention."

About a week ago, I ran a story detailing some of the challenges adults with autism face. As they "age out" of the education system, support services switch from being entitlements to eligibility-based programs, many of which are at capacity and have lengthy waiting lists.

There is a need to "plan for the thousands of children with autism who are already transitioning into adulthood," the census notes, because "the current funding level will serve only a fraction of the adults with autism who currently and will, in the future, require support.

"Recent research indicates that adults with autism have higher rates of both medical and psychiatric comorbidities than adults without autism, and issues a call for services and supports to be delivered across the lifespan. Otherwise, the risk increases for homelessness, law enforcement intersections, expensive hospitalizations, and poor quality of life."

For the first time, the census collected data from the justice system, showing dramatic increases in contacts with law enforcement — something Shea attributes to a lack of appropriate services.

In 2011, over 500 people with autism who receive services from Medicaid "had contact with the juvenile or criminal justice systems," with property and personal contact crimes leading the way. In 2005, there were just 150 contacts, Shea says.

"We think that as autism has increased the systems have not been able to keep pace. And without the appropriate diagnosis and services and supports to help with community integration and living successfully and thinking about planning for a job and transitioning to adulthood [...] that can result in a crisis that can result in a justice system contact."

Shea says a new report has been planned to "think about what resources these systems need and point to places where action can be taken," and will include an analysis of what kind of charges where filed and where.

The census includes a range of other interesting findings. For instance, just 8 percent of people with autism served by the state's Office of Vocational Rehabilitation got jobs. And the rates of autism appear to be higher in more rural counties, something the report says is worthy of further study.

Still, it's not entirely clear what kinds of specific policy changes the report might support. Shea, for one, noted a Medicaid expansion might be worth consideration.

"It would make the poverty requirement more consistent with states across the U.S., which could increase eligibility," she says.

And when it comes to the thousands of adults who will need services, "Setting up the systems to provide for their care is a huge need," Shea says. "Getting more specific than that is a bit tricky."