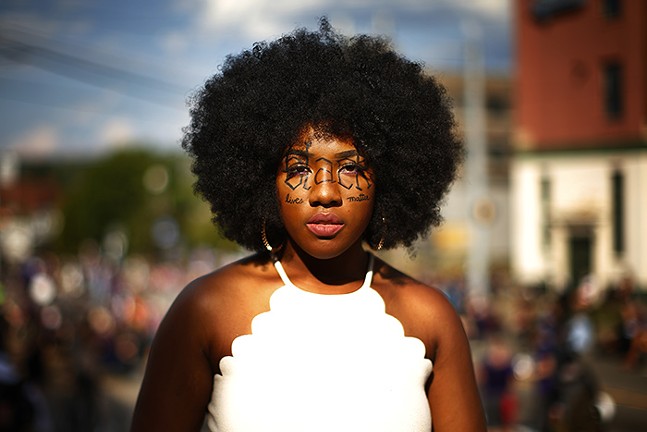 CP Photo: Jared Wickerham
Martayla Poellinitz poses with her "Black lives matter" makeup
Chances are high that even if people in Pittsburgh haven’t heard the name Martayla Poellinitz, a lot of them have already seen her social media content. Her TikTok account, @martymoment, boasts over 25,000 followers and has garnered international attention in the last few months thanks to her striking makeup looks that fall more towards the cosplay-realm than the everyday.

Poellinitz, however, wants to be known for more than just makeup. She considers herself a creative content creator over anything else.

“A lot of people call me the makeup girl, and while it’s nice to be known for something in Pittsburgh’s community, I’m working on breaking out of that bubble,” says Poellinitz, who recently started showcasing non-makeup content on her social media channels like natural hair tips and political statements.

“Considering that I’m Black, my being is political, and I like to make people aware of the differences between people,” she says. “Makeup is merely a segway for me to say what’s on my mind.”

Along with political action like posts about police brutality, links to change.org petitions, and writing “Arrest The Cops who Killed Breonna Taylor” and “Defund the Police” on her face, Poellinitz has utilized her platforms and her makeup mastery to highlight something more politically obscure: Computer Vision Dazzle or CV Dazzle, an avant-garde makeup technique used to obstruct facial recognition algorithms from identifying your face. 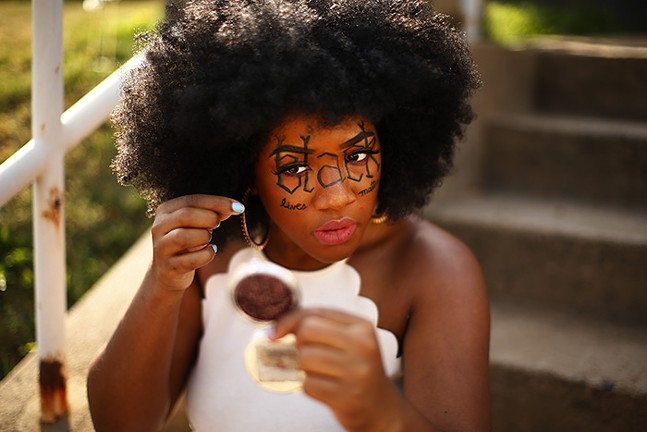 CP Photo: Jared Wickerham
Amidst ongoing protests in the wake of George Floyd’s death, protecting one’s identity has become an urgent issue. With law enforcement using facial-recognition technology to identify and arrest protesters, one photo of someone’s face can put their livelihood at risk. Besides being a human rights violation, its implementation could also lead to false arrests, with BBC reporting that the technology is far less accurate at identifying Black and Asian faces compared to their white counterparts.

In June, Poellinitz, who lives in Pittsburgh, posted multiple videos to her TikTok and Instagram accounts in which she explained CV Dazzle and tested different CV methods to see what worked the best to fool facial recognition technology. Her posts racked up hundreds of thousands of views and resulted in Poellinitz being featured in Vogue, CNN Style UK, and more.

The look that was most successful used facepaint. Poellinitz drew black and white irregular shapes on her face reminiscent of mountains and said she was only able to get facial recognition technology to work about 5% of the time.

“I just feel so fortunate and so blessed that I’m really good at trendspotting and research,” says Poellinitz in an Instagram story after her CNN Style UK interview. “I really feel that those are my two best skills.”

As far as makeup goes, Poellinitz says she enjoys doing it because it offers her the opportunity to work with other creatives, energizes and fuels her creativity, and allows her to feel more connected to a community. But she doesn’t see herself being a full-time makeup artist.

“Working with people is very draining for me. But I’m open to picking the projects I work on or even being someone in the beauty community who just works on themselves,” she says. “There’s a lot of people like that nowadays thanks to social media. I guess you could say that I’m not worried about monetizing off this particular hobby, but if it comes, I’m not automatically saying no.”

Photo: Martayla Poellinitz
Another reason Poellinitz has chosen not to become a full-on makeup artist and influencer is because of her minimalist approach.

In 2017, Poellinitz went through a particularly bad mental health spell — she suffers from anxiety, depression, and PTSD. She knew she needed to make a few life changes. That’s when she discovered minimalism.

“It isn’t just about throwing away stuff, it’s about taking all the unnecessary out of your life so that you can see where your priorities lie, where your interests lie, and what exactly is important to you,” says Poellinitz. “It really just turned my life completely around. Minimalism is one of the reasons I figured out why I wasn’t going to pursue makeup.”

In the makeup community, having the latest and greatest products is coveted. There are constant product launches, and influencers are continuously showing off their new palette. For at-home viewers, it can seem as though, without those top-tier products, there’s no way to get that flawless look. But Poellinitz prides herself on letting her followers know that’s not the case.

“I used to be the type of person where I could tell you what brands were having what product launch, what shade this was, what palette something came from, and then, when I got into minimalism, I was like, I don’t need all of these products,” says Poellinitz. “Not only is makeup already such at a high price point, a lot of the palettes are the same, or you’re just buying the packaging. … I realized the over-consumption that’s encouraged in the makeup community. Since that directly challenges my values, I can no longer spout off information about the latest brands or product launches; I just have my technique.”

Photo: Martayla Poellinitz
In September, Poellinitz is debuting a podcast called Marty Minute where she’ll have brief affirmations on different topics. She’s very into fitness, weight lifting, and yoga, and is a huge mental health advocate. She’s also in the middle of creating her first YouTube video about her natural hair, after the success that her natural hair tips videos received on TikTok.

By not limiting herself to makeup, Poellinitz has become a sort-of creative content extraordinaire.

“I do makeup as a release, and I hope people just find them fun. Something interesting to look at that they’ve never seen before,” she says. “Even when I create more political posts, I hope people are just receptive to what I’m saying. I understand social media can be a bit of an echo chamber, but I really hope they take the tools and apply them.”