At Home With: Jon Moss, Editor-in-Chief of The Pitt News | Pittsburgh City Paper 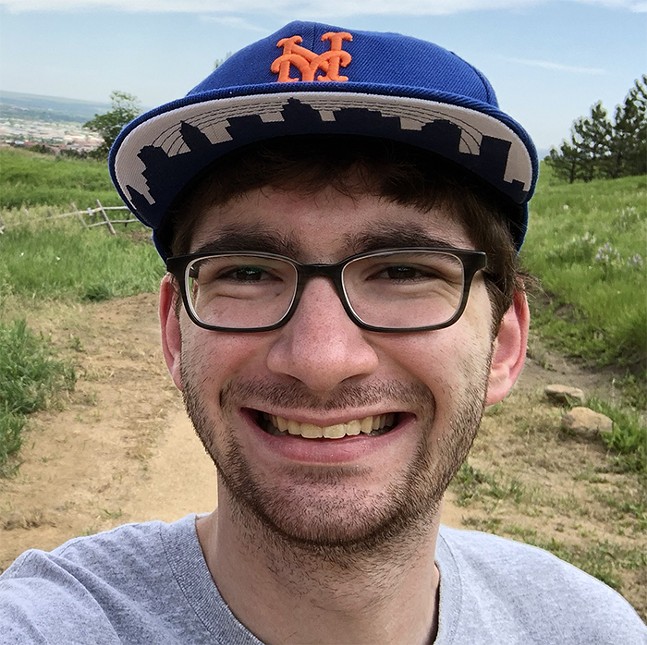 Photo: Jon Moss
Everybody is dealing with COVID-19 quarantines and restrictions in different ways. You can contact your loved ones on your own, but you might also be curious how your favorite strangers in Pittsburgh are coping, so Pittsburgh City Paper is reaching out to artists, activists, workers, and makers to see how they're doing.

Today, it's Jon Moss, editor-in-chief of The Pitt News.

What's your daily quarantine routine been like? What would you be doing on a typical quarantine Tuesday, for example?
My daily quarantine routine has been a bit monotonous, though things are changing a bit as the semester starts up. I usually wake up around 9 a.m. and immediately check my phone to see what’s going on in the world. I’ve usually got an avalanche of emails and some messages about what Pitt is up to that day from either official folks or my sources.

By late morning, I’m usually in the thick of it with covering some university announcements or editing stories filed by writers. Nowadays, I’ve got classes mostly in the afternoons, where I try and sneak in some email responses. One of the things about this job is that it’s sometimes relentless — late Friday afternoons seem to be a go-to time to release important information, and we usually have to cover that right away.

What's the vibe like in Oakland right now? I drove through the other day, and it looked the same as any other Oakland August, just with more masks.
I’m actually not in Oakland right now — my parents are very immunocompromised, so I am spending the semester at home to help out around the house. I’ve talked with a lot of friends, and it sounds like Central and South Oakland — where students predominantly rent off-campus apartments and houses — are still pretty crowded, and there are parties going on. Unlike in Pitt-owned housing, renters can’t easily get out of their leases, so they’re on the hook for rent this semester, pandemic or otherwise. It’s been a mixed bag with health guidelines, where on one block you could have some people keeping away from others, while a party music blares across the street.

I know from working at CP that this is a pretty wild time to be in journalism. How has The Pitt News been managing things? What kind of changes have you had to make?
It’s been a very difficult time at The Pitt News lately, with a truly staggering increase in our workload. I am extremely grateful that our staff has banded together to get through this as a team, and we are all trying to be patient with each other as we produce the news. One change we’ve made is to have one of three news editors be on call every weekday, so there is someone ready to cover news as it breaks. There’s never been enough news before where we needed to have someone monitoring things literally all day long.

You obviously have challenges that EICs before you didn't have to deal with — have your predecessors been able to offer any useful advice?
Previous EICs of The Pitt News have been very gracious in offering advice to our staff throughout their tenures and beyond. One tip that’s been useful lately is to take breaks and work in a truly collaborative way with our almost 20 editors. This helps to spread out the work, and also include people in a truly historic series of stories we are publishing.

Another is to treat the people we cover with kindness and the utmost respect — what we write can affect what tens of thousands of people think about a particular person or issue. With a topic as sensitive as a pandemic, it’s essential stories are framed properly for our readers.

How do you feel Pitt is generally handling the pandemic response? Is there anything you wish they were doing differently?
I think Pitt’s handling of the pandemic response has had a lot of both positives and negatives. It’s a real strength that they have avoided pay cuts or layoffs for the vast majority of faculty, unlike many other universities, during an exceptionally difficult time for higher education. I think it was good that they spread out move-in over a period of weeks to avoid long lines.

But there also have been some major hiccups. Many have noted that it may not have been feasible in the first place for reopening plans to rely on students not gathering in large groups at the same time that administrators were excitedly welcoming any and all students back to campus. I wish that they would listen to concerns from students in a more open and honest way — some have said college administrators are chasing after tuition dollars this fall, but that money doesn’t seem to buy a whole lot of influence in decision-making.

Other than your own, what newspapers, magazines, blogs, or other publications do you read the most?
As someone deeply ingrained in the Pittsburgh media scene, it’s probably not surprising that I read the Post-Gazette, City Paper, PublicSource, and Tribune-Review very frequently. I also read The New Yorker as often as I can, though there’s a big stack of unread issues on my desk right now.

What was the best thing you ate (or drank) this summer?
The best thing I ate this summer was lemon herb chicken, made at home from a recipe that a friend gave me. The fresh basil and thyme help make a really delicious sauce, and with a little rice on the side, the dish made our family feel like we were on a little quarantine vacation to some fancy restaurant. And the recipe only took an hour or so to put together.

What's a charity or organization you recommend donating to right now?
I recommend donating to a local food bank. There is an enormous number of people hurting right now, and food banks help ensure that people can put food on the table for their family. The way I look at it is that I’d be spending that money at a restaurant or at some other local business without the pandemic going on, so I still want to find a way to get that money out of my pocket and into somebody else’s hands so they can take care of their family, too.
© 2022 Pittsburgh City Paper