LGBTQ Coalition and TransYOUniting announce takeover of 2021 Pittsburgh Pride, plan to work with organizations throughout region 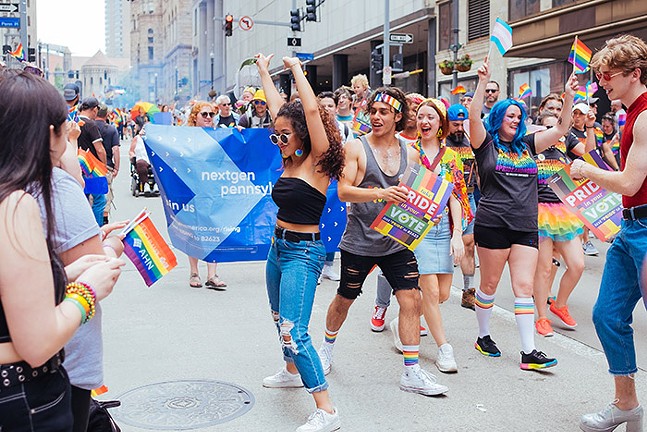 CP photo: Jared Murphy
Pittsburgh Pride in Downtown Pittsburgh in 2019
Today marked a new direction for Pittsburgh Pride when it was announced that the 2021 event would be presented by LGBTQ organizations across the city and Western Pennsylvania. This comes shortly after the event’s original host, the Delta Foundation, announced it would dissolve.

TransYOUniting founder Dena Stanley made the official announcement on the steps of Downtown's City County Building, along with representatives from the LGBTQ Coalition and other groups. Pittsburgh Pride 2021 will take place from June 4-6 in Downtown Pittsburgh, and will include a parade and an LGBTQ+ BBQ. Additional details, including event locations, entertainment, and more, will be revealed on the LGBTQ Pittsburgh website and social media channels later this year. 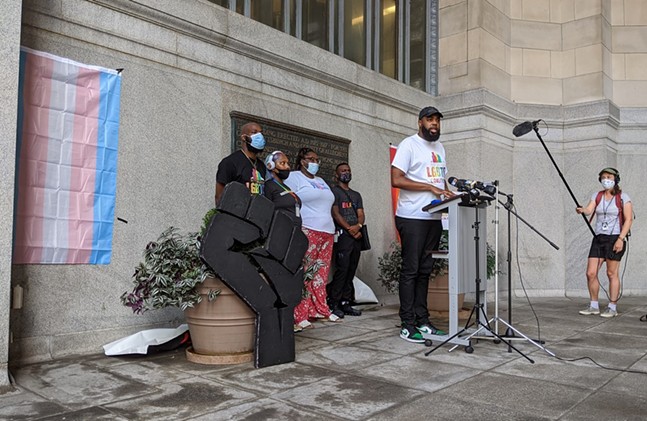 CP photo: Amanda Waltz
Dalen Michael addresses the crowd during the 2021 Pittsburgh Pride announcement at the City County Building on Mon., Aug. 24, 2020.
A press release says the new direction will ensure that Pride is an “inclusive and safe space for all members of the LGBTQ+ community.” Organizers also promise that it will honor important figures in the LGBTQ rights movement, including late trans activist Marsha P. Johnson who was one of the central figures at the 1969 Stonewall Riots.

The Delta Foundation announced the dissolution of its organization this weekend and attributed it to the cancellation of this year's Pittsburgh Pride due to coronavirus restrictions, claiming in a post on its Facebook page that 90% percent of the foundation's revenue came from the event.


At a special meeting held yesterday, a recommendation was made by the Executive Committee to the Board of the Delta...

Posted by Delta Foundation of Pittsburgh on Sunday, August 23, 2020

While Kenny West, founder of LGBTQ Coalition, says they have “no statement on Delta,” the change in Pride’s leadership comes after years of grievances over how the LGBTQ advocacy handled the important annual event over the past 13 years. Those complaints ranged from excluding much of the community from the planning process to booking non-LGBTQ friendly musical acts.

There’s also the matter of Delta charging fees to attend Pittsburgh Pride events, which the new organizers promise will not be an issue. West says the 2021 event will be “a Pride for the people, and affordable for the people.”

In addition to Pittsburgh Pride, the organizers announced that it also has a list of demands for the City of Pittsburgh and will also be hosting weekly events called Freedom. Justice. Equality (F.J.E) Wednesdays until those demands are met. Those demands include removing Pennsylvania Code Title 18, Section 508, which details use-of-force for police officers, and hiring and promoting more Black Pittsburgh Police officers.

“Pittsburgh Police has one Black commander, no Black lieutenants, and only seven Black sergeants,” says Dalen Michael, vice president of the LGBTQ Coalition. “This is a problem.”

Also included is a call to remove any protest-related citations and charges waged against Stanley, Nique Croft, and LGBTQ Coalition president Lorenzo Rulli, who was arrested during a recent series of demonstrations outside of Pittsburgh Mayor Bill Peduto’s Point Breeze home.

Overall, LGBTQ Coalition and TransYOUniting hope to work with other area organizations to make the city a more equitable and welcoming place for LGBTQ and Black people.

“This is about bringing love back to a community,” says West. “That’s what this message is about.”
© 2023 Pittsburgh City Paper