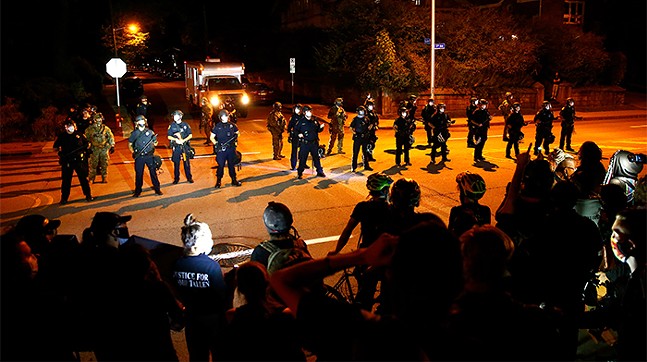 CP photo: Jared Wickerham
Police face off with protesters on Wed., Aug. 19, 2020
Today, Pittsburgh Mayor Bill Peduto announced some changes to how police will be dispatched and respond to protests moving forward. No firings or punishments of police officers were announced, according to the press release.

These announcements come after Pittsburgh Police used pepper spray on protesters in Mellon Park, after an apparent attempt to kettle protesters, and arrested one protester and charged him with felony riot charges. Protesters demonstrated outside of Peduto’s home on Wednesday, but then marched to Mellon Park as requested by the police shortly after 10 p.m. Upon arrival at the park, police lied to protesters about the park being closed, ordered them to disperse, and used pepper spray and apparently shot some projectiles at protesters as well. Wednesday’s incident comes after Pittsburgh Police, dressed in plain clothes, arrested a protest marshal during a march in Oakland, and hauled him off in an unmarked van. Allegheny County District Attorney Stephen Zappala said the marshal never should have been arrested, and instead given a ticket at most.

In a statement, Peduto said that part of his goals upon first being elected in 2014 was to reform many city departments, including the police. Peduto hired Cameron McLay in 2014, who made splashes with public statements condemning “white silence” and carried out some punishments of police officers. But FOP Lodge #1, the union representing Pittsburgh Police officers, passed a vote of “no confidence” against McLay in 2016, and he resigned later that year. Pittsburgh Police Chief Scott Schubert took over after that, and he has served in that role ever since.


Mayor @billpeduto released the following statement regarding the responses of @CityPGH's @PghPolice to ongoing protests in #Pittsburgh.

The Mayor has ordered a series of immediate changes to the command structure following recent events. https://t.co/dcHPpnuW7Y

Peduto said that he does not support the recent actions that Pittsburgh Police have used against protesters.

“I have repeatedly watched interactions between police and protesters that escalated to uses of less-lethal weapons, arrest methods and other actions that I do not support, and which run counter to our common principles,” said Peduto in a statement. “This is not the reform I wanted, and that I continue to believe in today.”

The changes being announced today include assigning a new Incident Commander to oversee protests, as well as new seats being made available at the police’s Civil Affairs and Public Safety Community Engagement department, which typically responds to protest activity.

New assignments also include a new oversight and command structure for the police’s Special Response Teams (SRTs) and SRTs will “no longer be used as the primary units to respond to incidents and protests, and only dispatched during narrowly-defined situations when absolutely necessary to protect the public health,” according to the release. Guidelines for the use of SRTs are currently being written, and the city says they will be made public once finalized.

As part of these guidelines, jump-out arrests will be banned. The protest marshal arrested in Oakland was subject to a jump-out arrest, which raised the ire of advocates and the ACLU.

Additionally, all police units will be barred from wearing military-style camouflaged uniforms at such events. As Pittsburgh City Paper reported earlier this week, Pittsburgh Police were dressed in fatigues during the incident in Mellon Park.

Peduto added that he and Schubert are reinforcing the order that media present at protests must be protected. Protesters have largely suffered the most damage from police use of less-lethal weapons, including some serious injuries, but CP photographer Jared Wickerham was also hit with pepper spray on Wednesday night. Other media members have also been struck by sponge rounds and inhaled tear gas during protests.

“I fully support the unabridged 1st Amendment rights of the press, and I want them to freely monitor activity at protests on behalf of the public,” said Peduto. “Their presence and coverage are the backbone of transparency, accountability and democracy, and I apologize if that was hindered in any way on Wednesday.”
The Pittsburgh Police Community Engagement office will be expanded to oversee that Civil Affairs Unit, police recruitment and other programs that are “critical to reestablishing trust” between police and residents. A new head for this office will be announced; the position will report directly to Schubert.

According to KDKA, FOP President Robert Swartzwelder is predicting massive retirements of police this October when 268 officers become eligible. Swartzwelder said this is likely because of comments made by Peduto and District Zappala over the police handling of the protests.

“Some police officers are going to say, ‘OK you don’t want us, we’ll go and do something else,’” he told KDKA.

No discipline was announced in the mayor’s statement, and this isn’t the first time during the post-McLay era that shake-ups have been announced. Last June, the department announced reassignments involving some police zones and the bureaus undercover department, which came several months after four undercover detectives got into a brawl with members of the Pagans motorcycle club at a South Side bar, according to the Pittsburgh Post-Gazette. This year, the Pittsburgh Police have undertaken a months-long campaign of arresting and seeking charges of dozens of Black Lives Matter protesters who have been alleged to commit crimes.

According to today’s announcement, there were also no plans to curtail the police use of less-lethal weapons. Only jump-out arrests and camouflage were banned. Some Pittsburgh City Councilors believe more reforms are needed.

Councilor Corey O’Connor (D-Squirrel Hill) said yesterday on Twitter that he is drafting legislation to ban the unrestricted use of facial recognition and predictive policing technology. City Councilor Erika Strassburgher (D-Shadyside) condemned the police use of force against protesters and also urged the need for additional reforms.

“We cannot hope to make our city a better place unless we are willing to do the hard work of internalizing pleas for change and committing ourselves to working together to instill and demand more accountability,” said O’Connor.
© 2021 Pittsburgh City Paper