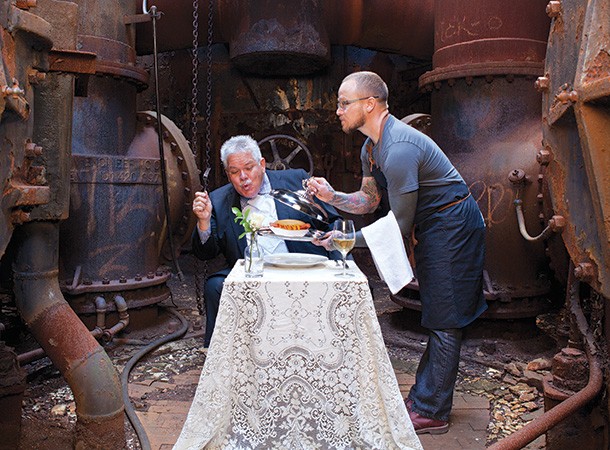 Photo by Heather Mull
Best Chef Kevin Sousa serves up one of his many specialties.

"Downtown dining" was once long on sophistication, but short on innovation. No longer: All three of this year's top new restaurants are based there, with the winner distinguished by the inventive, protein-forward menu of Richard DeShantz. And Butcher's cocktail program, pioneered by Maggie Meskey, has already been honored by the James Beard Foundation.

The reigning king of Pittsburgh cuisine, Sousa has been at the top of the game since the local foodie renaissance began. This year's big feat: raising over $300,000 via Kickstarter for Superior Motors, a restaurant complex planned for Braddock.

To make sure their Indian cuisine is authentic, the chefs at Taj Mahal make their own yogurt and cheese fresh daily. The best way to sample the best this readers' favorite has to offer is to try the expansive lunch or dinner buffets, replete with dozens of appetizers, entrees and desserts. For less than $9 for lunch and $12 for dinner, you can't go wrong.

There is no better spot to watch the South Side careen by than from a window seat at Nakama. Add to the experience freshly prepared sushi; an extensive selection of appetizers; steak and fish entrees; and perhaps a signature martini or draft beer, and it's no wonder this spot is popular every night of the week.

Inspired by the bakery — Il Piccolo Forno — that his parents operated for years in the Strip District, Domenic Branduzzi opened Piccolo Forno in 2005. The specialties include wood-fired pizza and an array of Italian classics, such as lasagna and scratch-made pappardelle with braised rabbit. There are also vegetarian options like spinach ravioli and the tagliatelle with a fresh mushroom ragu.

Nicky's offer two in-town locations to satisfy your craving for freshly prepared Thai food. Set in a house, the Western Avenue spot is cozy and homey; in season, patrons can dine in the leafy back garden. But for lunchtime or pre-theater dining, the Cultural District spot is perfect for pad Thai or spicy curry.

2nd: Thai Me Up, South Side

A longtime favorite of City Paper readers, Sesame Inn offers an extensive menu of traditional Chinese cuisine, from General Tso's to Peking duck, as well as a selection of Thai dishes and, at three of their four locations, sushi. A comfortable atmosphere — and copious choices for meat-eaters and vegetarians alike — make this a great spot for family gatherings.

For more than four decades, Ali Baba has been providing Pittsburghers with a wide variety of Middle Eastern cuisine, right in the heart of Oakland. The economically priced lunches are popular with college students, while the dinner menu offers entrees, including soups, meat kebabs, fish and a vegetarian special. Finish up with a sweet farina cake.

Mahi mahi taco, chicken mole burrito, whole-wheat tortillas. Call it Mexican fusion if you like, but Mad Mex's spin on tacos, burritos and the like, incorporating Californian, Southwestern and Asian influences, is entering its third decade of popularity locally. And why can't a carnitas enchilada share a table with the Thanksgiving-meal "Gobblerito" burrito?

Here, "meat and potatoes" is no shorthand for ordinary. Not when the meats take the form of pastrami-crusted duck breast, pork pozole, bone marrow or a 34-ounce rib eye for two. This is traditional American fare raised to the tippy-top, presented in a sophisticated but casual space, and well matched with fine craft cocktails.

There aren't too many steakhouses where you can walk in wearing jeans and a Pirates T-shirt and enjoy a rib-eye that's been dry-aged for 50 days. And that purposefully versatile vibe isn't this chain's only Pittsburgh touch: Drop in for a "Hines Ward" filet mignon or "Steak Crosby" New York strip.

Tourists love the Mount Washington location for the view, but both iterations of this upscale restaurant offer the same high-quality seafood, flown in from around the globe. With specialties like Chilean sea bass and mako shark, and daily fresh-fish options, there are always old and new reasons to return to this culinary destination.

2nd: Off The Hook, Warrendale

This perennial "Best of" honoree grabs diners' attention with the knife-wielding displays of its chefs. But the sushi at this decade-old South Side landmark proves that, beneath the flash and dazzle of its tableside theatrics, there's a commitment to the choice fresh seafood and deliberate preparation sushi requires.

Eating out is a religious experience at this restaurant known for its all-natural, hormone-free beef burgers. But there's more here than just the traditional cheeseburger. Burgatory offers a selection of crab, bison, chicken and elk burgers, all of which can be stacked with a list of toppings too long to mention. Don't miss the sinfully delicious milkshakes.

You may ask: "Why even have a 'best pizza' category when Mineo's always wins?" But you may as well ask the birds why they sing to every sunrise, or ask your Uncle Stan why he always talks about how hot it was working in the mills. Some things are rituals. And a pizza at Mineo's is one of them.

Wing night starts early and ends late at this Mount Washington watering hole (whose menu is big and getting bigger). And by the end of every Wednesday, thousands of tender-inside, crispy-outside wings have been devoured by townies and visitors alike.

PGH Taco Truck was born when food blogger James Rich made the potentially crazy decision to buy a food truck on the Internet. And it's lucky for us that he did: With a range of traditional and less-traditional menu options, the truck's offerings make for the perfect quick bite. Follow @PghTacoTruck on Twitter to keep track of its whereabouts.

Since launching in 2000, this locally owned chain holds its own against the nationally known heavies, partly by allowing each of its 30 locations to express an idiosyncratic style. And if you're wondering what's up with the goat logo, it all goes back to a coffee-origin myth involving an Ethiopian's oddly energetic herd of goats.

Patrons keep coming back for the almond torte, the tiered cakes, the chocolate dipping station and the cupcakes — 30-some kinds, including specialties like Elvis in Oakmont (banana-mousse filling, peanut-butter frosting). But fans speak perhaps most wonderingly of the signature, über-decadent Oakmonter: layers of cheesecake, chocolate cake and chocolate fudge icing, all studded with candy.

Oakmont Bakery, founded in 1988, is huge, with expansive showcases displaying: dozens of doughnut possibilities, from Maple Bacon to "doughsants"; full lines of pastries, pies and cookies; danishes; dolces; 24 types of bagel; and breads from baguettes to rolls, sourdough to cinnamon-raisin. Not forgetting the in-house café. But it's so popular that you should expect a line anyway.

Many ice-cream shops boast lots of frills and gimmicks, but not Dave and Andy's. There, a no-nonsense vibe puts all the focus right where it should be: on fresh, homemade ice cream, sorbet and yogurt. The in-house waffle cone is always the way to go; don't miss the tiny M&M at the bottom.

The history of Mancini's is a classic American-dream story. Founded in McKees Rocks in 1926 by James Mancini, an Italian immigrant, it now produces thousands of loaves a day, supplying restaurants and stores all over the city. And since the McKees Rocks bakery is open 24/7, no one in the region need ever go without fresh-baked bread.

This city has its share of fancy restaurants, but there's something regal, traditional and fancy about having brunch at the Grand Concourse. The buffet tables are full of upscale fare to fit all tastes and appetites. There's an omelet bar with eggs, French toast and pancakes, and the fresh donuts are always a favorite.

3rd: The Zenith, South Side

Convenient to the convention center, the Cultural District and Pittsburgh's business district, Ten Penny is a good pick for lunch fare (or even an early pre-show meal). The expansive menu at this "casual upscale" restaurant is sure to satisfy all. Don't skip the meatballs, which come smothered in tangy marinara, topped with a creamy dollop of whipped ricotta.

2nd: NOLA on the Square, Downtown

While some restaurants may be BYOB simply because they lack a liquor license, at Piccolo Forno it's been part of the concept Domenic Branduzzi envisioned when he opened the doors in 2005. The restaurant concentrates on the food and the atmosphere, and lets customers play the role of sommelier, bringing their own libations to pair with the meal.

Long before outdoor dining became a thing, the front patio at the Harris Grill was the place to be. Perfectly perched just above Ellsworth Avenue for optimum people-watching, how easy to while away the afternoon or evening with craft beer, cocktails and hilariously named food ("The Garden Weasel," "Thanksgiving in Blawnox").

Founded in 2004, East End is still draft-only — available at select bars, its own brewery and Pittsburgh Public Market. But the inventiveness and quality of flagship brews like the hearty Big Hop and flavorful Fat Gary Nut Brown Ale — plus small-batch bottled treats like Gratitude Barleywine — keep fans lined up for growlers and pintfuls.

Late-night dining options have never been extensive here, but in a realm of grab-and-go, Mad Mex is a welcoming sit-down outpost for hearty burritos, tacos, enchiladas, salads and nachos, plus draft beers and margaritas to wash it all down. For you penny-pinching night owls, the original Oakland location offers a selection of half-off items from 11 p.m. to 1 a.m.

At the flagship Friendship location alone, there are nearly 70 beers on tap and more than 300 bottles, and a day almost never goes by without a new malted beverage added to the rotation. The specialty here, though, isn't just variety: Sharp Edge boasts one of the largest selections of Belgian beers in the state.

3rd: The Urban Tap, South Side

Wine hasn't had quite the foodie cachet of artisanal cocktails or craft beers in recent years, but a well-curated wine list defies trends — and Sonoma Grille has long been the most celebrated wine bar in town. This list has something for everyone, from $6-a-glass zinfandel to $2,900-a-bottle cabernet.

Best Locally Made Wine or Spirit

"American whiskey was born in Pittsburgh," boasts this home-grown distillery, which has committed itself to carrying on the tradition. And readers clearly believe Wigle has succeeded, with its selection of organic and white whiskeys. Offerings also include bitters, gins and honey. And if you'd like to make your own spirits, Wigle also sell aging kits.

It's hard to screw up a taco, which is what makes finding a really great taco so delightful. Delicious and filling (each one weighs between a third and a half a of a pound), the truck's menu changes slightly from day to day. Recent offerings have included spicy jerk chicken with avocado-lime cream and vegan chorizo with pineapple salsa.

Siblings Naomi and Zeb Homison launched this juice bar last year, using cold-pressed juices exclusively to preserves nutrients and enzymes. Carrot-apple-ginger, coconut water, cacao blast and a half-dozen others are on offer here. The Juice Company adjoins Zeb Homison's yoga studio, but we figure a bottle of the juice works off enough karma for starters.

At this popular multi-day festival held every May, attendees will find all the favorite Greek dishes, from traditional salads and moussaka to lamb skewers and grape leaves, plus excellent baklava. Plenty of less-familiar fare such as soutzoukakia (fried kebab-like meatballs) is also worth a try. Take a break from eating and enjoy the music and dancing.