"One of the goals I had was to present both sides of the sport: the entertainment spectacle and the everyday game."

The provocative new docu-essay From Deep — Pittsburgh-based director Brett Kashmere likens it to a mixtape, combining professional basketball, street ball, hip hop, fashion, race and popular culture — makes its Pittsburgh premiere this week. Kashmere talked to CP via email about some of the issues of race and basketball that the film raises. 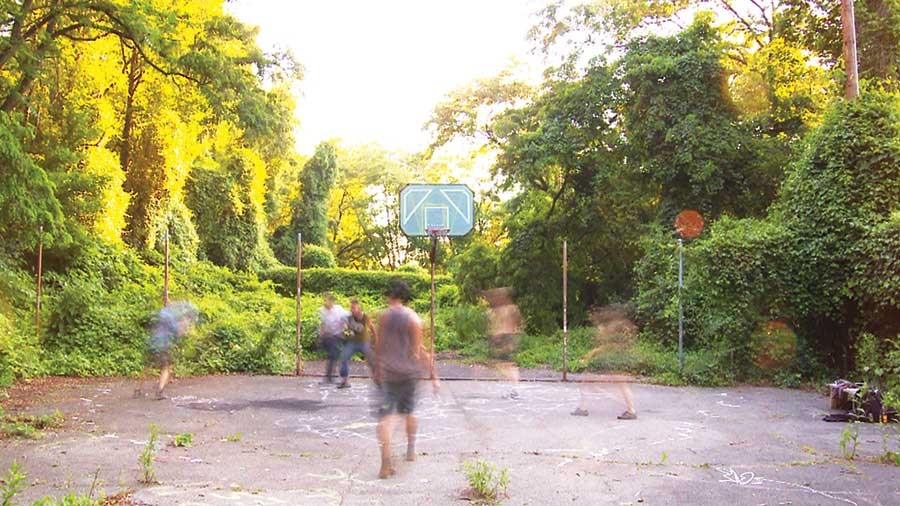 What prompted you to tackle this topic?

Growing up in a small Saskatchewan town, I was captivated by big cities and urban aesthetics, urban culture and by America, particularly sports and politics. [Via cable TV], I watched a lot of Detroit local news and Detroit sports as a kid. That experience definitely shaped my initial impression and understanding of the U.S. and gave me a window into contemporary American social and cultural politics, not to mention racial discourse.

This time period was bracketed by the heyday of the great "Bad Boy" Pistons teams and the University of Michigan Fab Five teams, which were the first to embody hip-hop aesthetics in their on-court fashion and style of play.

I've always been drawn to alternative cultures and forms of expression, like experimental film. When I first started listening to hip hop, it was not yet in the mainstream. Also, I never thought about hip hop and basketball as being separate; they were part of the same culture in my childhood: When my teenage interests were taking shape, Do the Right Thing, The Arsenio Hall Show, NWA, Public Enemy, the NBA on NBC — they were all intricately linked, and Michael Jordan and Spike Lee were seemingly in the middle of everything.

Rap is what led me to basketball, rather than the other way around. I had been looking for a new sport, after quitting hockey around age 14 or 15, and basketball was attractive, because you could play it year round, and on your driveway, alone or with others, you didn't need a bunch of people. And, it didn't seem to have the same macho tough guy baggage that hockey did, which I always disliked.

That personal narrative is what drives From Deep. I've long been interested in the intersection of sports, identity, nationality and fandom. That's been my primary area of investigation for the past decade, and it stems from watching and playing sports all through my youth and high school years (when I played high school basketball, and in college I coached girls high school basketball). My previous research and work dealt with hockey violence and Canadian identity. When I moved to the U.S. in 2006, to Syracuse, New York, where basketball rules the local culture, it was a natural moment to shift my focus in that direction and reconnect with a former passion of mine.

What determined your choice of style — the docu-essay?

I've been working in the essay film mode for some time now. I'm interested in POV, subjectivity, argument, agit-prop, the collision of image and language — what I would call a cinema of ideas. I greatly prefer the viewpoint of the participant-observer, the critical fan, the amateur historian, to that of the so-called "expert." Also, my approach is research-based and process-oriented, so the essay form is an ideal vehicle for me. There is no preconceived plan or script to follow during the shooting process, and no attempt at exhaustive analysis — it's a personal, tentative, speculative investigation.

From Deep is part video essay, part audio-visual mixtape. The mixtape is a useful analogy, and structural principle, for me. It's an accessible idea that most people understand right away, and it's a widely practiced popular art form. I grew up in the era of cassette tapes, and it's the first way that I experienced music, taping songs off the radio, making dubs, and so on. In the analog era, there was an effort to making a tape, it happened in real time; no dragging and dropping of files. A good mixtape has a clear narrative and emotional arc, but also eclecticism, personality, the element of surprise, a tight flow. All of those aspects have influenced my approach to editing, and to making work more generally.

Other pro sports have troubled racial pasts. Is there something unique about basketball's journey?

Basketball has this history of incredible barnstorming teams — the Globetrotters and the Renaissance Big Five in particular — that traveled the U.S. in the first-half of the 1900s and helped redefine the game. They had to operate this way because they were "too black" and too good for any of the existing (white) leagues, but they still competed against and usually beat all-white teams in what would have been considered exhibition contests. This is a little different than what was happening in the world of professional baseball, which had clearly delineated leagues for white and black players.

NCAA basketball's popularity has also soared. Vis-a-vis race and popular black culture, is there anything that distinguishes it from the NBA as you outline in the film?

Although college basketball is now a huge commercial enterprise on par with the NBA, there is still a certain nostalgia associated with it which is pervasive and very symbolically powerful. Since college players are "unpaid" they are deemed to be playing for the love of the game, rather than a paycheck, and thus it's popularly considered a purer form. Universities and corporations, meanwhile, are making millions off the backs of these "student athletes," who are actually performing more like full-time uncompensated employees. At least in the NBA the players are getting market value for their work.

But I think in terms of race and and its place in the popular culture, there are a lot of similarities between NCAA basketball and the NBA. It's only since the 1980s that the NBA has been more popular than college ball, and that's largely the result of Magic Johnson and Larry Bird entering the league at the same time (in 1979), along with ABA stars like Dr. J. who were, of course, pitted against each other as a reductive, black vs. white stylistic counterparts in marketing and commercials.

On a slightly different note, I don't think professional athletes are very well positioned to have the same impact politically as they did in the 1960s and earlier. Advertising has changed everything. There's too much at stake financially for big-time stars in the sporting world to be bold politically. [ ...] Athletes want to be brands now, and having an opinion outside of the mainstream does damage to that.

The recent controversy over the L.A. Clippers' Donald Sterling's remarks and Bruce Levenson of the Atlanta Hawks' email — that the game had grown too black and was discouraging white fandom — show that there are still flashpoints for the NBA around race, perception and bottom line.

I think the situations with Sterling and Levenson point to the fact that race is still one of the NBA's central topics, maybe the central topic. If anything, those incidents strength and support many of the arguments I make in From Deep. At the ownership and executive levels, the NBA is a mostly white club. Sterling has exhibited racist behavior and attitudes for decades, and the league continuously turned a blind eye. But the fact that they were proactive this time around, with a new commissioner at the helm who seems to have stronger moral convictions than David Stern ever displayed, may also signal a tipping point. Players have been accruing more and more power with each generation, through the strengthening of its players' union, the strategic use of free agency, increased league revenues, new media platforms, marketing savvy, etc, and the power dynamics of the NBA are changing to reflect this. That's one of the underlying subtexts of LeBron's return to Cleveland — he was never going to have the same decision-making influence if he had stayed in Miami. Players are becoming (slightly) more politicized on the subject of race, and that's an encouraging sign. It would be great to see the rest of the league follow suit.

Yet, unlike other pro sports, basketball is an anytime-anywhere-anybody game.

One of the goals I had for From Deep was to present both sides of the sport: the entertainment spectacle and the everyday game (or pastime). And to capture some of the specificities of playground ball that don't usually show up in the movies: the distinctive nature of each neighborhood court, the social environments, the different mixtures of people, to demonstrate a glimpse of the amazing diversity and variety of how and where the game is played.

One thing we decided to do with From Deep was to put the camera in the game. To not just follow the action, but to be part of the action. My cinematographer, Toby Waggoner, was bold about jumping right in, and becoming an active participant. At times we put the camera on wheels, and ran it up and down the full length of the court. I think the result is a unique, multidimensional representation of the game, one that's more rounded than the televised version, with its passive, fetishistic observers, and more realistic than the way Hollywood movies portray it.

One of the main critiques in the piece concerns the creeping professionalization of amateur sports in the United States. I'm not talking about college sports, which are already a pro-style system (except for the remuneration of labor), but youth leagues that track statistics, where every coach is also a scout, looking to climb a ladder, where ninth-graders are being recruited by college programs, and offered scholarships. It's disturbing. LSU, for instance, has its own K-12 "university laboratory" school on campus, which allows them special access to elite athletic talent at a very early age.

That said, I think From Deep ends on an optimistic note, with a celebration of the playground game, the game of driveways, schoolyards, and repurposed spaces. It's a place of invention and personal expression. The the last part of the film also offers a defense of LeBron James' "Decision" and of professional athletes' right to be treated as any other workers, to unionize, to choose their own employers, etc.

These days there is so much corporate branding.

I make the point in From Deep that the rise of Michael Jordan as the world's first corporate branded athlete was a major turning point in the commercialization of basketball. His famous line — "Republicans buy shoes, too" — when asked why he refused to endorse an African American candidate who was running against Jesse Helms in his home state, says it all. NBA stars are remarkably well-marketed and styled. That is something the NBA does better than any other professional sports league, in North America at least. I think the synthesis of hip hop and basketball, originating in the early 1980s with songs like Kurtis Blow's "Basketball" and Run-DMC's "My Adidas,"has had a big influence on all of this — the fact that sneakers and athletic gear were embraced by rap stars early on gave those things a lot of street credibility, which continues to persist.