No, the Steelers are not fining players who kneel during the national anthem, as claimed in a satirical article | Pittsburgh City Paper 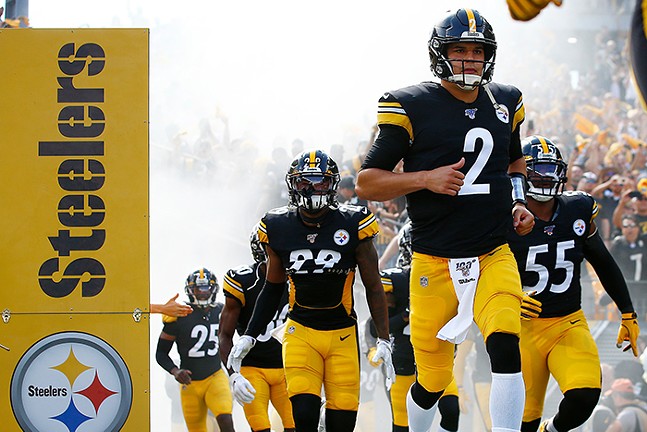 CP photo: Jared Wickerham
Pittsburgh Steelers takes the field during a game on Sept. 15, 2019
This year, the NFL rolled back its rule saying it would fine players who knelt during the national anthem after widespread Black Lives Matter protests broke out following the deaths of George Floyd and Breonna Taylor. The NFL even issued an apology to former San Francisco 49ers quarterback Colin Kaepernick, who started kneeling in protest of police brutality against Black people, and the league encouraged teams to sign him.

This stoked the on-going culture war over athlete protests, with opponents claiming that kneeling during the anthem is disrespectful to the country and the military. (Kaepernick consulted with a veteran before starting his kneeling protest.)

Either way, the culture war continues and a satire site is taking advantage, as gullible Pittsburghers and others sharing one of its stories as if it were fact.

The story is published on dailyworldupdate.us which is labeled clearly as “satire for flat earthers, Trumpsters, and y’all Qaeda.” The headline of the satirical article reads “Pittsburgh Steelers Will Fine ANY Player Kneeling For The Anthem $1 Million.”

The fake story quotes a fake executive of the Steelers and even includes racist tropes about Popeyes Chicken. The byline also reads "Flagg Eagleton" and is filed under the category "Satire You Can Kneel To." 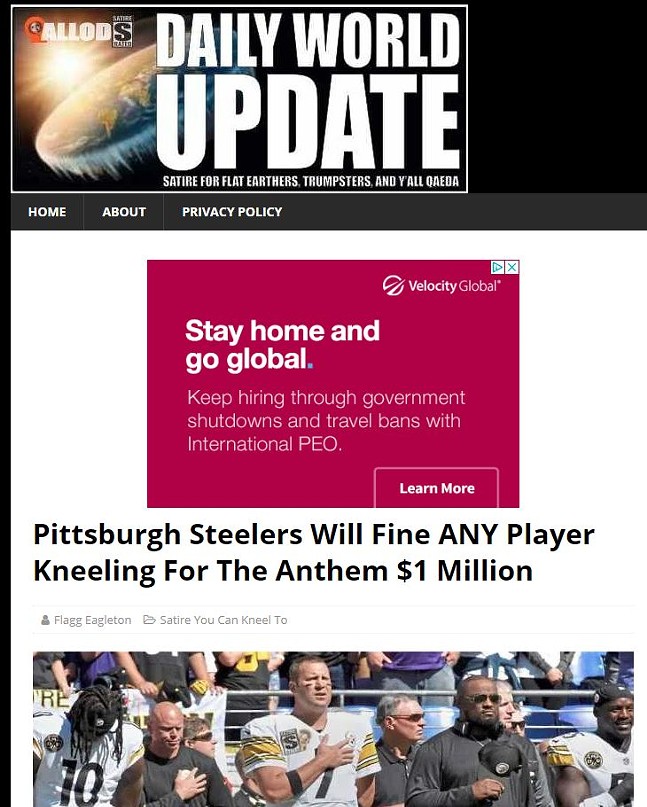 Screenshot taken from dailyworldupdate.us
Again, nothing in the article is true. It’s satire, but feels even worse. The whole site is filled with fake stories that seem to be specifically published to trigger conservatives and the far-right. Other stories falsely claim that Hillary Clinton threatened Melania Trump or that Malia Obama was arrested and it received no press coverage.

Even so, people are sharing it like it is real. Apparently not even opening the site to realize that it is poorly written satire.

Friends on FB sharing a fake article about the Steelers fining players for kneeling and commenters thinking it's real tells you everything you need to know about society. Like, did you really not even click or look at the source? (That's rhetorical)


Even talk show host and sports columnist John Steigerwald shared the link to the fake story, and didn’t point out it was satire. 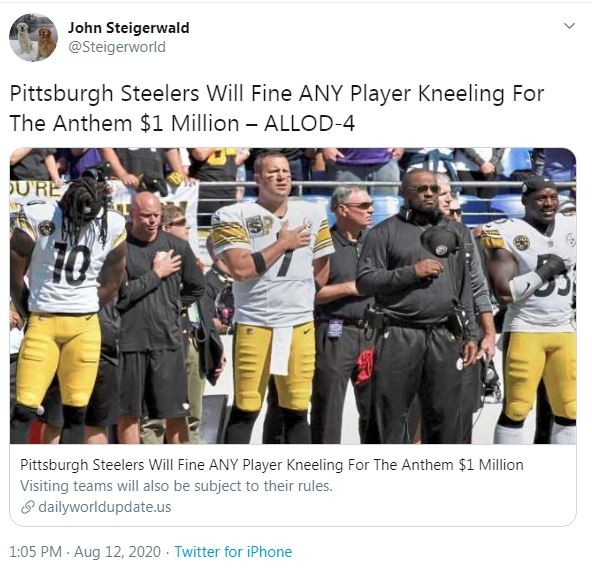 Screenshot taken from Twitter
Pittsburgh talk radio host John Steigerwald sharing the fake story
The truth is that Steelers coach Mike Tomlin said in June that he supports players that take a knee during the anthem.

"We've spent a lot of group time talking about the ongoing issues, talking about the platform that they have and how to best utilize it and how to do so thoughtfully," said Tomlin during a conference call on June 23. "Our position is simple: We're going to support our players and their willingness to participate in this — whether it's statements or actions.

Nonetheless, fake stories like this have a habit of spreading on social media, particularly by the right and especially on Facebook. Recently, NBC News reported that there are more than 3 million Facebook members of groups supporting Qanon, a baseless conspiracy theory that falsely believes elites and Democrats are being an underground child prostitution ring. Last night, a QAnon supporter won a congressional primary in Georgia, all but assuring she will be seated in Congress next year.

So please, don’t spread the fake story about the Steelers, and call people out who do. It’s fake, and obviously so.
© 2022 Pittsburgh City Paper