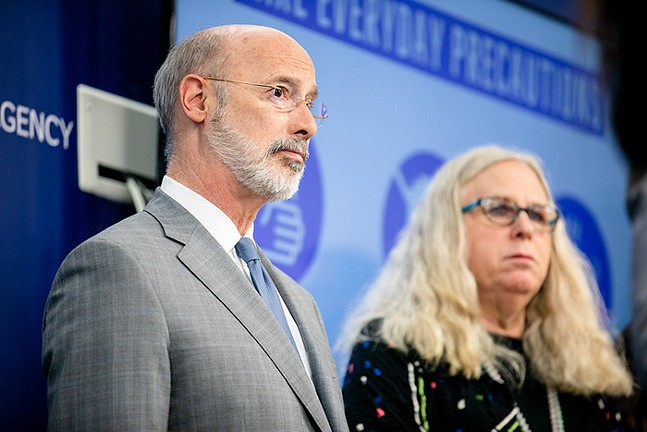 Gov. Tom Wolf with Dr. Rachel Levine
Pennsylvania Governor Tom Wolf (D-York) spoke out today on Twitter against transphobic comments that have been directed at state health secretary Dr. Rachel Levine, who is transgender. His comments also address an incident at the Bloomsburg Fair and one of the Pennsylvania event's Facebook posts depicting a man impersonating Levine that went viral.

“This is the latest in a relentless series of vile slurs directed at Secretary of Health Dr. Rachel Levine — a highly skilled and accomplished member of my administration. Dr. Levine is a distinguished public servant. She’s committed to keeping Pennsylvanians safe and healthy, even those who direct hate-fueled attacks at her. I’m proud of the work she has done in her five years serving Pennsylvanians, and especially during the COVID-19 crisis,” Wolf said. “Hate has no place in Pennsylvania. I’m calling on all Pennsylvanians: Speak out against hateful comments and acts, including transphobia, when you see them.”


I want to talk about the transphobic incident involving the Bloomsburg Fair.

This is the latest in a relentless series of vile slurs directed at Secretary of Health Dr. Rachel Levine — a highly skilled and accomplished member of my administration.

The photos, which the Bloomsburg Fair Facebook page posted and later deleted, directly referenced Dr. Levine and showed a man dressed in a blonde wig and dress being dunked in a dunk tank. The dunk tank was part of a fundraiser at the Columbia/Montour Fireman’s Relief Carnival, which took place at the Bloomsburg fairgrounds over the weekend.

The Bloomsburg Fair released a statement on July 20 attempting to walk back the post, which repeatedly spelled Levine’s last name wrong.

“The sole purpose of the dunk tank, which was operated by the Bloomsburg Fair, was to utilize the likeness of a public figure in an effort to raise monies for local fire companies,” the statement read. “At no time was it the intention of the Bloomsburg Fair, anyone affiliated with the Fair, including any sponsors of the Carnival, to knowingly utilize the likeness of Dr. Lavine [sic] in a dunk tank as any form of commentary on Dr. Lavine’s [sic] transgender identity. The Bloomsburg Fair and the sponsors of the event do not endorse any comments which arose subsequent to the event which disparage Dr. Lavine’s [sic] transgender identity or any other discriminatory comments.”

At a news conference on July 21, Bloomsburg Fair officials directly apologized for the post and said that the man pictured was a fire company official who dressed as a woman for his turn in the dunk tank, which “soon transformed into a disrespectful parody of [Dr. Levine].”

“On behalf of the Bloomsburg Fair Association Board of Directors, our sincerest apologies go out to Dr. Levine, our shareholders, our sponsors, and all others for this serious lapse in judgment,” the statement read.

Pennsylvania House representative Brian Sims (D-Philadelphia), who is an alum of Bloomsburg University of Pennsylvania, also posted a statement on his Facebook page defending Levine and decrying the actions of the Fair.

“The Bloomsburg Fair and the fire companies involved owe Dr. Levine and the LGBTQ+ community a massive apology for perpetuating hatred, but also owes us an investigation into how this happened, measurable plans to ensure that it doesn’t happen again, and a track record of accountability that can only [be] earned by doing right going forward," said Sims.
© 2023 Pittsburgh City Paper