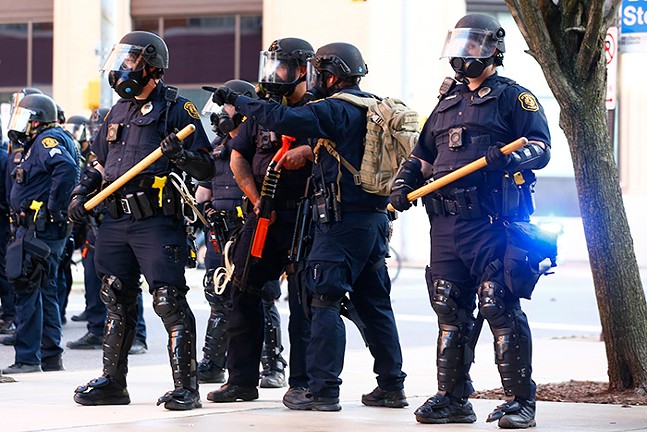 CP photo: Jared Wickerham
Pittsburgh Police in riot gear on June 1 in East Liberty
Yesterday, Pittsburgh City Council passed a bill that would add a ballot question for city voters this November, asking if the city’s Citizens Police Review Board should be strengthened.

The ordinance was introduced by Pittsburgh City Councilor Ricky Burgess (D-Point Breeze) and was passed unanimously by council. The question asks if Pittsburgh’s Home Rule Charter should be amended by “expanding the powers of the Independent Citizen Police Review Board to allow the Board to require police officers to participate in investigations, conducting performance audits of the Police Bureau and preventing the removal of Board members except for just cause and with City Council approval?"

The ballot question comes as Pittsburgh City Council is considering several police reforms following the death of George Floyd and the Black Lives Matter protests that have been ongoing in Pittsburgh for several weeks. If passed by voters, the Pittsburgh’s Citizens Police Review Board (CPRB) will have more power to investigate police-officer misconduct and civil-rights complaints against officers.

Currently, Pittsburgh officers aren’t obligated in their contract to cooperate with CPRB, according to PublicSource. If the ballot question is passed on Election Day, police bureau staff would be required to cooperate during CPRB’s investigations and refusal would be grounds for firing.

Several protesters are currently suing the city of Pittsburgh, alleging the police participated in "escalating a peaceful protest into a scene of pandemonium, panic, violence, and bloodshed" during an altercation on June 1 in East Liberty. CRPB and the city's Office of Municipal Investigations are currently conducting investigations into the actions of Pittsburgh Police on June 1.

According to TribLive, Pittsburgh Mayor Bill Peduto and Pittsburgh Public Safety officials are supportive of the bill to create the ballot question. Election Day is Nov. 3.
© 2022 Pittsburgh City Paper