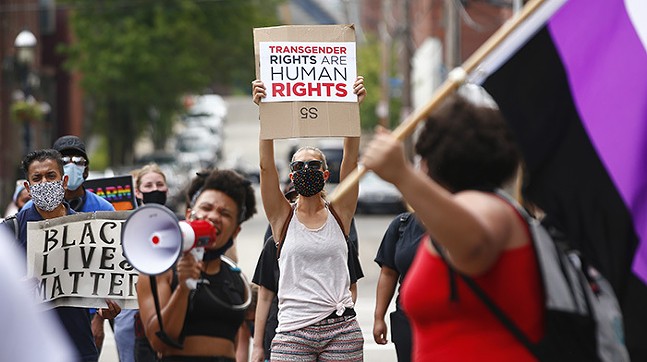 CP photo: Jared Wickerham
A July 7 protest for trans rights organized by LGBTQ+ Coalition and TransYOUniting
Earlier this week, Allegheny County Council unanimously passed a bill that would add protections for people seeking medical treatments to the conditions of its nondiscrimination bill. The bill was later signed by Allegheny County Executive Rich Fitzgerald. It comes on the heels of the Trump administration rolling back health-care protections for transgender people.

Before the bill was passed, the county had nondiscrimination protections for protected classes of people in regards to housing, employment and public accommodation. The protected classes include: race, color, religion, national origin or ancestry, sex, gender identity or expression, sexual orientation, disability, marital status, familial status, age or individuals who use a guide or support animal.

By adding “for the purposes of providing medical care” to the nondiscrimination ordinance, that means all of the above protected classes of people cannot be legally discriminated against when seeking or receiving medical care from physicians, physical therapists, nursing homes, psychiatric care, and other forms of heath care.

Allegheny County Councilor Paul Klein (D-Shadyside) introduced on June 19 in response to the Trump administrations’ recent decision to reverse an order that provided health-care protections for trans people in hospitals, doctor’s offices and in dealing with insurance companies.

“This is yet another rule or regulation put forward by this administration that defines sex discrimination as only applying when someone faces discrimination for being male or female,” said Klein on June 23, according to the Pittsburgh Post-Gazette.

In 2018, the global advocacy group Human Rights Watch put out a report documenting the many barriers that trans people face in the U.S. health-care system, and the discrimination they often encounter. Over the last several weeks, Pittsburgh has been holding marches for transgender rights, some with a specific focus on fighting for the rights of Black trans people.