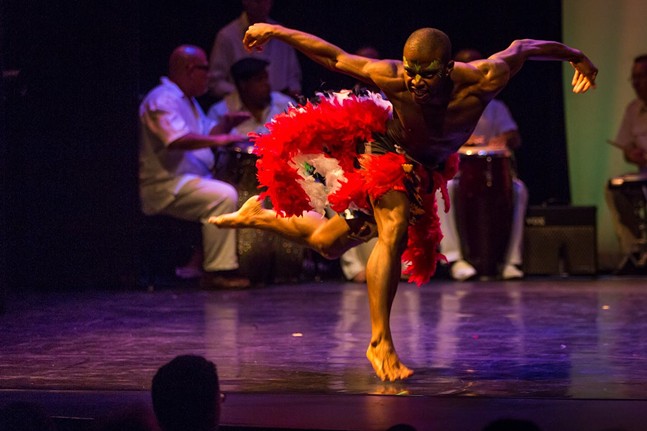 Photo: The Legacy Arts Project
From the annual DanceAfrica event, which was canceled this year.
The economic struggling of the pandemic has affected nearly every industry, including the arts community, who doesn't necessarily receive the same bailouts or donations as other organizations. The Kelly Strayhorn Theater, a hub for eclectic and diverse live performances in a pre-COVID world, is joining together with six other arts organizations for Hotline Ring, a collective fundraiser on Thu., July 16, from 5-11 p.m.

The virtual event, which aims to center organizations that are led by and work with Black, queer, and non-white people, include 1Hood Media, the Braddock Carnegie Library Association, Dreams of Hope, the Legacy Arts Project, and BOOM Concepts.

The fundraiser replaces KST’s annual Full Bloom event, a benefit that happens every June. KST executive director Joseph Hall, who replaced previous director janera solomon at the beginning of March, says that canceling their annual event opened up the space to try something new and more impactful, instead of simply rescheduling it.

“We spend so much time and energy as individual organizations having our own fundraisers, and that’s great, however I thought we could do much more together,” says Hall. “We can present what the larger community looks like in terms of arts organizations in Pittsburgh, arts organizations led by and in community with queer, Black, and people of color.”

While the July 16 fundraiser is the event that brought all these groups together, it is not the singular goal of working together. Erin Perry, executive director of the Legacy Arts Project, whose annual DanceAfrica event was canceled, says that working together with the organizations involved in Hotline Ring has brought the community closer, and prepared them to work together in the long haul.

“I’m always reminded of the maxim that, if you wanna go fast, go alone, but if you wanna go far, go together. And I think that we’re doing a lot of work together to continue to elevate the arts community,” says Perry. “Yes we have the destination on Thursday, but the journey to get here has been this beautiful unfolding of getting to know each other more, and getting to see each other’s organizations and appreciate the work being done in our city.”

Hall echoes that sentiment, and the idea that creating art is not just about the final product that you perform or showcase to an audience.

“Just being able to work on something big with each other, that for me, is kind of the art,” says Hall. “What we share on Thursday will be phenomenal, will be great, but our process together, that is the larger project actually.”

The event begins at 5 p.m. with a Zoom happy hour, a libation, and an introduction of all the organizations. Local restaurants Everyday’s a Sunday and Casa Brasil will have snack boxes for ordering in conjunction with the event. For the rest of the event, each organization will have around 30 minutes to talk about what work they do with the community, and show a collection of footage from past performances. Halfway through, there will be a champagne toast, including a tribute to former KST director janera solomon. The event wraps up with a virtual dance party featuring tunes from DJ Nate da Barber.
Donors have several options for how they can distribute money: they can donate directly to one or more of the organizations involved, or they can donate to a collective pool that will be distributed among all of the organizations. Hall says the collective funds are distributed in an equitable way, citing the Pittsburgh Gender Equity Commission report that found Black women have a disproportionately low quality of life in the city. Forty percent of the collective pool will go to the two Black femme-led organizations, PearlArts Studio and the Legacy Arts Project. The goal for the collective pool is $100,000.

The collective of these organizations is not only a fundraising and a community-building project. Perry says this kind of work is a critical survival tool in Black culture.

“This has been the saving grace in a lot of our communities, in particular in Black communities, that’s what art is,” says Perry. “It’s our ability to have resilience because we sing. It’s our ability to have some health in our body because we dance. It just allows us to use our art as tools for healing, and that’s what has been a part of our culture as Black people — although consciously we don’t necessarily always articulate that this is what helps us to survive — we know it is.”
© 2022 Pittsburgh City Paper