Tweets from @PghBoogy, who identified himself on Twitter as "Kurt Cofano"
Last Thursday, a man was arrested in Mt. Lebanon for having more than 30 improvised bombs and several detonators in his Mercedes. According to his criminal complaint, Whitehall resident Kurt Cofano was arrested for possession of homemade bombs and in connection to online threats he made. This included threatening to “blow up” the Treasury Department in Harrisburg and “go to the CIA headquarters in [Washington] D.C. and take out as many [expletives] as I can before I get gunned down,” according to Whitehall Police, who assisted in the case.

But what hasn’t been reported yet are other online threats apparently made by Cofano, including threats targeting Black Lives Matters protesters. Not to mention Cofano’s other apparent social media posts include sharing right-wing YouTube channels and praising President Donald Trump. Cofano’s apparent Facebook page profile was also changed in April of last year to a picture of Trump signing an executive order.

The photo that @PghBoogey shares matches the appearance of a Facebook account of a Kurt Cofano, who lives in the Pittsburgh area and identifies as CEO of Cofano Energy Services, LLC, a contractor company that worked on natural-gas pipelines. 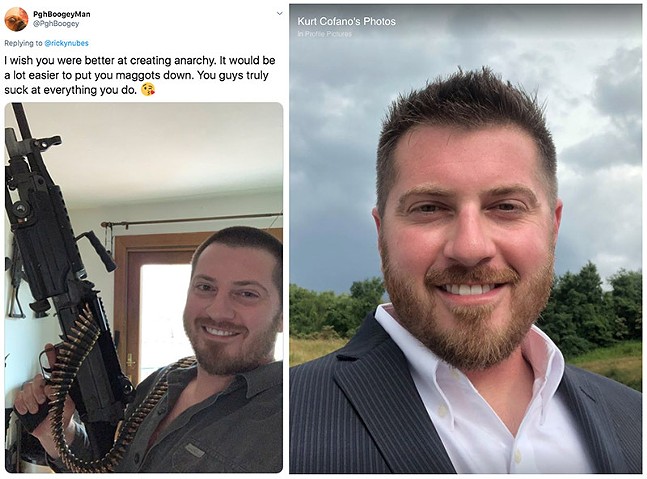 Screenshot taken from Twitter and Facebook
Tweet from @PghBoogey on June 2 (left) and a photo of Kurt Cofano shared on Facebook in July 2018
A post on Pittsburgh Reddit that describes the YouTube video also claims that the man who is apparently Cofano said he planned to dress up as Antifa and threatened physical violence against anyone beating up people or destroying property. Rubenstein says the Reddit post matches what he saw in the video, which was shared in a tweet from @PghBoogey on May 31. A large Black Lives Matter protest was held in Downtown Pittsburgh on May 31, and Pittsburgh Police claimed that day that people who had set fire to a police vehicle and participated in some property damage in Downtown Pittsburgh were “anarchists” likely from outside the Pittsburgh area. It was later revealed that all people arrested on May 31 were from the Greater Pittsburgh area, and one man charged with setting fire to a police vehicle was sporting a symbol of the Animal Liberation Front, a left-wing vegan movement.

“I know a lot of protesters and these are good people,” says Rubenstein, on why he felt the need to share the video and talk about it with CP. “I would just hate to see anything bad happen at one of these protests. It was very threatening. You watch it, and he seems like he is actually planning this.”

The @PghBoogey account sent another reply to Rubenstein on Twitter on June 2 that said “Yes, that is a threat. Yes, you can quote me. No, I don’t give a single fuck.”

On June 11, @PghBoogey replied to a tweet from a Seattle Antifascists account that said, "We need more people with guns at CHAZ," referencing an occupied protest zone in Seattle. A reply from another account said, "Would you like Police, some Patriots, or the Feds. Your choice." The @PghBoogey account replied to that tweet writing, "They should choose police [or] feds. Patriots don't have handcuffs. Only bullets," possibly inferring that private militia would only use firearms against protesters in Seattle. @PghBoogey also tweeted a video of far-right personality Candace Owens on June 14, and shared a screenshot on June 2 of a complaint about the so-called "racial grievance industry."

CP reached out to Mt. Lebanon, Whitehall, and Allegheny County police departments to try to confirm that the @PghBoogey account was linked to Cofano, since all these local departments assisted in either the arrest of Cofano or the investigation into him. Whitehall Police did not respond to an inquiry. Mt. Lebanon Police Chief Aaron Lauth and Allegheny County Inspector Ken Ruckel pointed CP to federal investigators who were also involved in Cofano’s case.

An email from the Pittsburgh office of the Federal Bureau of Investigations said that the “FBI does not confirm or deny the existence of any investigation,” when asked if the @PghBoogey was linked to Cofano. According to court records, Cofano is being held in the Allegheny County Jail as of today, July 13.

According to TribLive, Kurt James Cofano, 32, made a YouTube video where he threatened to “blow up” buildings in Harrisburg and Washington, D.C. TribLive didn’t mention any other social media activity from Cofano, but did say that he lived in Whitehall.

According to December 2019 U.S. bankruptcy filings for the District Court of Delaware, Kurt J. Cofano is listed as the CEO of Cofano Energy Services, LLC. (Cofano's Facebook page also lists him as CEO of Cofano Energy Services, LLC.) Before Cofano started his own small business in 2018, his Facebook page says he worked as a welder at Pipeliners Local Union 798 from 2014-2018. A public comment document from the Pennsylvania Department of Environmental Protection lists Kurt Cofano living at an address in Whitehall, when Cofano provided comment in 2016 on the then-proposed Atlantic Sunrise natural-gas pipeline.

Cofano’s Facebook profile picture is an image of Trump, and a post from April 2019 reads in part, “WE GOT OURSELVES A REAL PRESIDENT IN OFFICE NOW!!! FIXIN TO WORK OUR NUTS OFF TILL 2024!!!” The April 2019 post links a video of Trump signing an executive order meant to promote fossil-fuel energy companies and boost pipelines.

Most of Cofano’s Facebook page consists of posts that promote his contracting business. His last post was made in June 2019. According to court documents, Cofano filed Cofano Energy Services, LLC for bankruptcy in September 2019, and that case was closed on April 10 of this year.

According to court documents, Cofano was charged on Thursday with three felonies, including weapons of mass destruction and causing or risking catastrophe, and two misdemeanors, including making terroristic threats.
© 2022 Pittsburgh City Paper