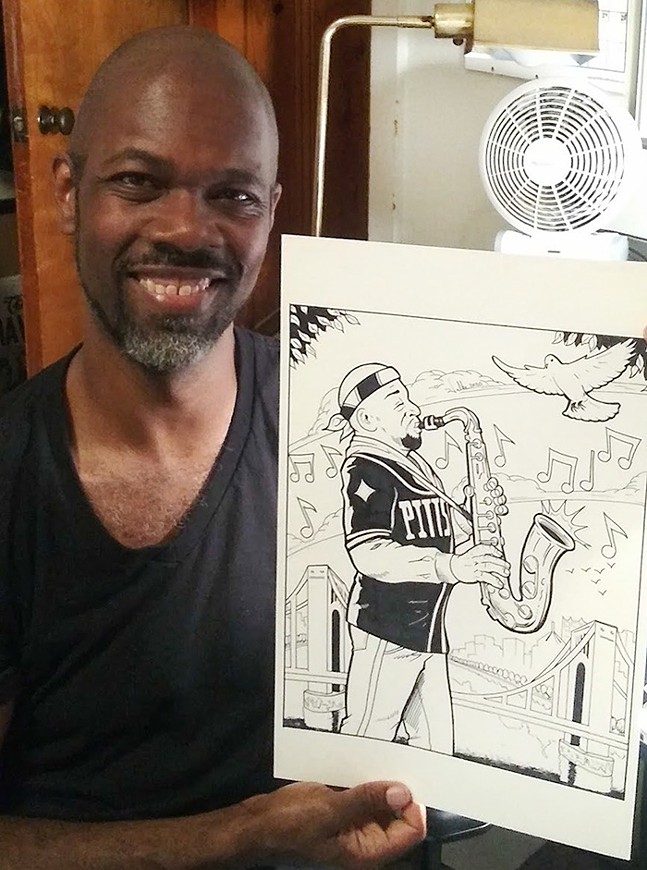 Marcel Walker and his illustration of Reggie Howze
If you’ve ever walked across the Roberto Clemente Bridge on the way to a Pittsburgh Pirates game, it’s likely you’ve heard Reggie Howze playing tunes on his saxophone. He’s one of the city’s longest-tenured buskers, shouting out to passersby between songs.

Pittsburgh artist Marcel Walker jumped at the chance to illustrate the Pittsburgh legend. “I LOVE this guy!” he exclaimed when signing up for the project, and says he listened to a lot of jazz saxophone while he was drawing the piece.

Walker is one of 35 artists who created a black-and-white illustration for City Paper’s Over-the-top Completely Ridiculous Yinzerrific Coloring Book, a benefit for both CP and the artists involved as a response to revenue lost due to the coronavirus pandemic. The artwork includes local landmarks, legends, and — yes, Pittsburghese, in a wide variety of artistic styles.

CP talked to Marcel about his portrait of Howze for the coloring book, his role as president of the Toonseum, and his work as project coordinator and lead artist for the Holocaust Center of Pittsburgh’s CHUTZ-POW! SUPERHEROES OF THE HOLOCAUST comic book series.

When did you first know you wanted to become an artist?
I was five or six when I knew I wanted to be a comic book artist. My father introduced me to them, and I was immediately pulled in. He was a talented visual artist, although he didn’t create comics professionally. He would redraw images from my comics, on request, and one day he suggested I draw my own pictures. That’s all it took, and I never looked back.

Your website and portfolio is so diverse! Do you have a favorite type of media that you prefer?
I’m a traditionalist in my approach to making comics, so my preferred media remains pencils, ink, and paper. I ink predominantly with a brush, but I incorporate quill and tech pens as well. All of my lettering and coloring work is done on computer (via Illustrator and Photoshop, respectively). In terms of subjects, I love drawing people who have an element of the fantastic to them. I’ve found that, if you look closely enough at “regular” people, you can find a quality that sets them apart. It’s why I like drawing commissions for meta portraits (or “superhero portraits”) of people. When it’s done right, we’re tapping into something extra that’s obvious in hindsight.

Can you tell me about the process that went into illustrating Reggie Howze?
When I draw real subjects — or fictional subjects based on real people, places, or things — I always amass reference images first. That meant gathering images for the sax player, his instrument, Pittsburgh bridges, the skyline, birds … everything in the drawing had to look believable. I use a digital tablet to scroll through the images while I draw in pencil, which is way easier than the old way of having physical references strewn everywhere! I typically get pencil artwork approved from a client before moving on to inking (a.k.a. finishing) it. At that point, I erase remaining pencils and scan the piece for coloring. I use the same photos for color reference.

You know, I’ve drawn saxophone players before and, because I love the music, I’m always enthused to do so … until I start gathering references and remember how detailed saxes are! Almost every other instrument is easier to draw than a saxophone. I don’t know how anyone learns to play them — those people are magicians! 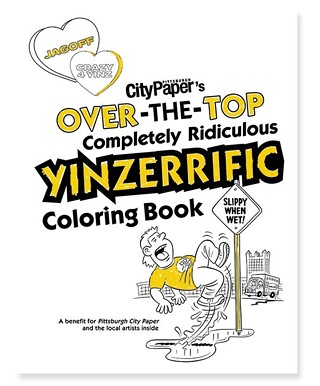 Do you play any instruments?
No, but my mother grew up playing the piano and organ in her church from a very young age. The extended family always said that she had “the gift” and just knew how to play. I didn’t really get to watch her play until I was a tween. She was amazing, and was able to follow ministers during sermons, and deacons during announcements, and members of the congregation during testimony. Her musical abilities confirm to me that all of the arts [come down] to understanding narrative and composition.

Has COVID-19 impacted the ToonSeum? Have you made any adaptations to your events or switched to any online experiences?
The COVID-19 crisis has most directly affected the ToonSeum’s programming plans. We’d just held a successful directors’ summit when the shelter-in-place orders began. Suddenly, all of the decisions we’d made and were enthused about, including programs we planned to debut this summer, weren’t possible. It was disconcerting, but we came to see that every arts-related institution, big and small, public and academic, was in the same position as our tiny organization. In ways we couldn’t have predicted, our modest size helped get us through. Larger organizations have larger overheads, including physical locations, and I’m certain that the decision to surrender the Downtown location ultimately saved the organization.

We brainstormed ways for the ToonSeum to be responsive to local communities during the crisis, and one of our team members proposed an idea that rapidly evolved into the Comic-Book Drop Off. We were able to coordinate a “comics on wheels” type of program for families with children 8-15 years old, and used comics to provide access to arts, entertainment, and literature. It was incredibly successful. We reached 30 communities across the region, and 77 kids received personalized (and sanitized) packets of comic books. If the community is willing to support us, we’ll do it again!

This coloring book is coming out during one of the most important civil rights movements in modern times. Do you think artwork has the power to bring change?
Art can actually embody change when it comes at the right time and speaks the right message. That’s true of all art forms, including comics. Two prime examples are Action Comics No. 1 from 1938 and The Montgomery Story from 1957, for very different reasons.

The former comic book introduced Superman to the world, and immediately repossessed a word — the character’s name, from the original “Übermensch” — that was being co-opted by the Nazi regime to articulate their concepts of Aryan superiority. By doing so, it denied them specific propaganda that would have negatively influenced public thought. The latter publication recounted the story of Martin Luther King, Jr. and the larger struggle of the 1950s Civil Rights movement in Alabama. It included actual instructions for people who might engage in protests such as sit-ins and marches, making it a dangerous publication to own in some places. However, it also likely saved lives, and it inspired others to join the cause, including Congressman John Lewis, one of Dr. King’s fellow revolutionaries. I consider The Montgomery Story to be the most important comic book ever published.

In the present, the tv series Watchmen, a live-action sequel to the award-winning graphic novel, boldly showed viewers an alternate world where the United States was reckoning with its history of racial violence through the lens of superhero protagonists. The first episode began with a graphic depiction of the real-world Tulsa race massacre from 1921, so shocking that it brought awareness of the event to a national level. For the first time, that previously buried event is being discussed openly in media and having effects on current political decision-making. I consider it fair to credit the artistry of Watchmen’s production for some of that awareness happening. 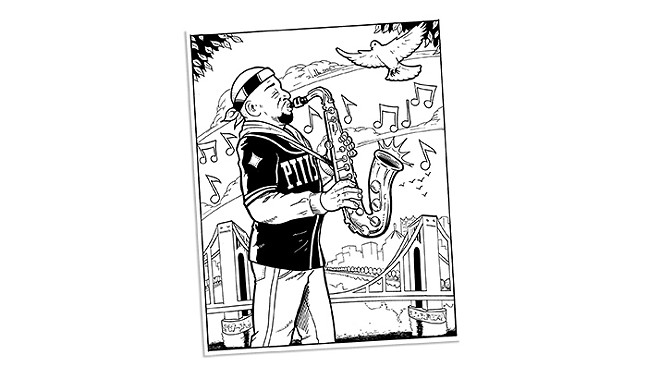 Marcel Walker's illustration of saxophonist Reggie Howze for Pittsburgh City Paper’s Over-the-top Completely Ridiculous Yinzerrific Coloring Book
Do you believe artwork has the power to heal?
Creating artwork can be therapeutic — I know it frequently is for me — because it’s where one can process what’s on their mind and in their soul in ways that can’t happen otherwise. And engaging with artwork can lead to growth, since it’s where ideas and communication intersect.

Making and engaging with art gives us a way to deal with trauma that doesn’t merely reopen wounds; it instead allows us to give the trauma context and put it in its place. That’s a major step towards healing.

What's next for you?
We’re putting the final touches on CHUTZ-POW! SUPERHEROES OF THE HOLOCAUST, Volume Four: Women’s Stories. It’s beautiful and, even though I’ve been involved with the project for years, I’m still learning new lessons from the stories. We also have a beautiful Teachers Resource Guide to help educators use the series within their curriculums.

Also, the ToonSeum is recruiting new board members! We’re actively seeking people from cultures that reflect our real world: Black people, people of color, Jewish people, women, younger professionals (21-30), LGBTQ community members, those with disabilities and accessibility challenges, and more. Please reach out to us for more information. We’re a great team to be a part of, and this is an exciting time to be shifting arts, culture, and the humanities toward the highest goals possible. Come and be our superheroes!