Art exhibit canceled after dispute over boycott of Israel 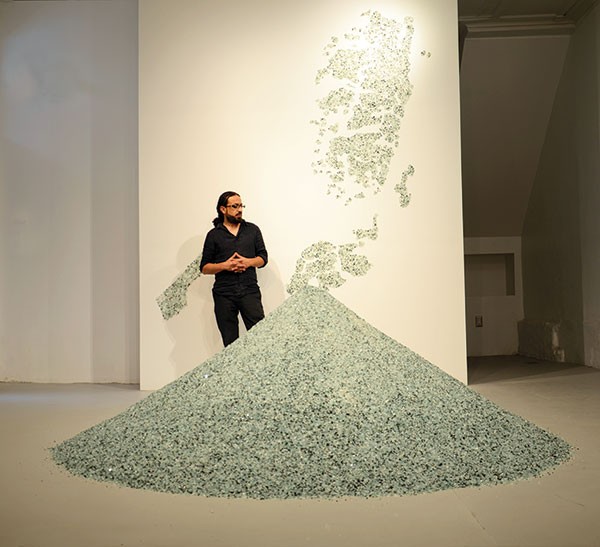 Photo courtesy of Tom Little.
Bashar Alhroub with his work "Diamond Land," made of broken glass. The map on the wall depicts Palestine.

This is a captioned slideshow of images of work from the cancelled Mattress Factory exhibition Sites of Passage: Borders, Walls & Citizenship, curated by Tavia LaFollette.

Art exhibit canceled after dispute over boycott of Israel

A map of Palestine made of broken glass. Rubber bullets lying beneath a tree like fallen olives. A few photographs are about all that remains of an art exhibit that never opened.

Sites of Passage: Walls, Borders & Citizenship was designed as a cultural exchange among Palestinian, Israeli and American artists. But the Mattress Factory museum cancelled the exhibit on May 28 — days before it would have opened, and days after a reported social-media campaign accused the show's three Palestinian artists of violating an international cultural boycott.

Installation works by the 11 artists — including three Israelis and five Americans — have been removed from the North Side museum's gallery at 1414 Monterey St. A related exhibit at Pittsburgh Filmmakers was also cancelled.

"It was going to be a beautiful show," says Mattress Factory director Barbara Luderowski.

The roots of the controversy lie in Israel's military occupation of Palestine and the treatment of Palestinians, which critics have likened to apartheid. (Many supporters of Israel, of course, defend that nation's practices on security grounds.) The cultural boycott of Israel is part of the Boycott, Divestment and Sanctions (BDS) movement. It bars participation with Israelis in projects that are not expressly about opposing Israeli oppression of Palestinians. Such participation is rejected as "normalization."

Bashar Alhroub, one of the three Palestinian artists in Sites of Passage, told City Paper via email that the original idea behind the exhibit "was consistent with BDS and the academic and cultural boycott of Israel."

"The main goal behind our presence and participation in the exhibit was to focus on the rights of the Palestinians, and to expose Israeli racism, occupation, and human-rights violations," he tells CP.

Alhroub says he withdrew because a statement on the Mattress Factory's website announcing the show "gave the exhibit a normalizing character, and had no relationship to the basic idea of the exhibit."

Tavia La Follette, an independent curator, began working on Sites of Passage two years ago. She traveled in both Israel and Palestine, but some Palestinian artists she approached turned her down because of the boycott; one artist told her, "You're never going to find anybody." The boycott, La Follette says, is "all that they have left. ... They're holding tight to it."

The three Palestinian artists — Alhroub, Manal Mahamid and Mohammed Musallam — agreed to participate only after the Israeli and American artists expressed their support of Palestinian rights.

La Follette also made sure all the artists reviewed any public statements about the exhibit. The lone exception was a statement announcing the exhibition at the Mattress Factory posted online April 28. A month later, La Follette says, language from that statement was cut-and-pasted "out of context" on Alhroub's Facebook wall. Phrases like "[t]he artists have been working collaboratively" were twisted to accuse the Palestinians of normalization. ("It was my fault," La Follette says. "I didn't show it to them.")

La Follette says that Musallam, fearing for the safety of himself and his family should he be thought to have violated the boycott, withdrew his participation. (Musallam and Mahamid declined, through LaFollette, to speak with CP.) Then the Israeli artists — Dror Yaron, Emmanuel Witzthum and Itamar Jobani — offered to withdraw instead, if that would help the Palestinians remain.

"The Israeli voice is very much present in Pittsburgh," says Yaron, who works at Carnegie Mellon's Robotics Institute. "The Palestinian voice is not."

Ultimately, though, the actual artwork wasn't the issue. The online firestorm — which La Follette says included petitions asking the Palestinians to withdraw, and personal emails pressuring them — was too strong.

The Mattress Factory's statement "could have ruined my reputation in my country, where I am well known as an artist who opposes the position of normalization," says Alhroub.

Ironically, however, "The show would have revealed a lot about the injustice of the occupation," says La Follette.

In one photo of Alhroub's now-dismantled work, supplied by LaFollette, fragments of broken glass sit in a large pile, and also form a wall map of Palestine. In another room, Mussallam mounted a flourescent light bulb on the ceiling and outfitted it with candles, to wittily suggest the rolling blackouts where he lives, in Gaza. A video installation by Mahamid depicted the artist stooping to harvest rubber bullets scattered on the ground as though they were olives fallen from a nearby tree.

Other works included Yaron's panoramic photograph depicting bags of concrete at a checkpoint outside Hebron, illustrating the Israeli military's limits on construction materials in Palestine. A video by Pittsburgh-based artists Susanne Slavick and Andrew Ellis Johnson overlaid images of the massive, Israeli-built concrete separation wall between Israel and Palestine with footage of the shoreline in motion. "Palestinians in the West Bank are always saying, ‘I would like to go to the sea,'" but they can't, says Slavick.

The Mattress Factory's Luderowski lamented the lost opportunity to exhibit the show.