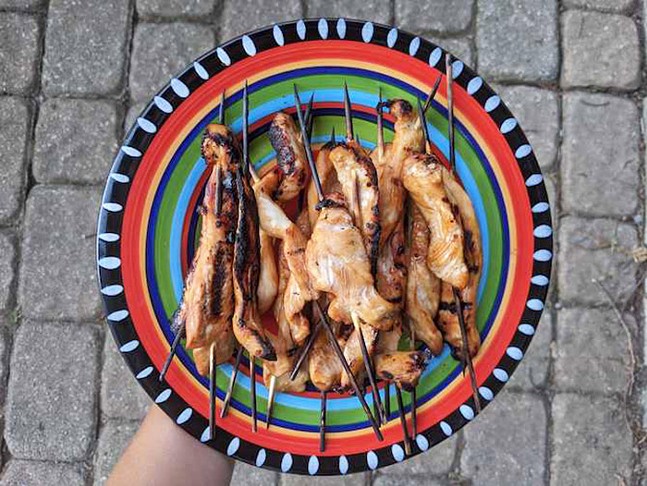 CP Photo: Maggie Weaver
At-home attempt at chicken-on-a-stick
This year, with fairs and festivals canceled around the city, bring the fairgrounds to your backyard by making your favorite overpriced, fried, and delicious treats at home.

CP illustration: Abbie Adams
Most of these are easy to recreate outside of a fair, as long as you have lots of oil on hand and a container to fry in. And with a vat of hot oil in mind, I opted out of frying for my first fair-food-at-home experiment, turning to chicken-on-a-stick instead.

This skewered, saucy chicken shows up at almost every festival and outdoor event in the summer, and for good reason. It’s a simple, delicious dish that walks well through crowds of people.

The chicken was, quite possibly, one of the easiest recipes I’ve ever made. The ingredient list was short: chicken cut into strips, skewers, teriyaki sauce, and honey mustard for dipping. Prep involved slicing the chicken thin and marinating it for about an hour, then stabbing the meat with a skewer and tossing it on a grill.

(Now, I did take an even easier route and bought pre-made teriyaki sauce; if you really wanted to get fancy, I encourage you to make the sauce from scratch.)

CP Photo: Maggie Weaver
At-home attempt at funnel cakes
After a few minutes on the grill, the skewers were nicely charred and ready to eat. It tasted as I remember: a great mix of sweet and savory, especially when dipped in the tangy honey mustard. One benefit of eating them at home was that I didn’t have to dodge oblivious fair-goers and could pair them with a healthy mix of veggies.

CP illustration: Abbie Adams
But it wouldn’t be a summer at the fair without something fried, so I braved hot oil for funnel cakes, a decadent fried dough brought to us by the Pennsylvania Dutch. Mixing the batter — a combination of egg, flour, sugar, vanilla, and milk — was simple enough, but as I started to fry, things got dicey.

I do not own a funnel, and instead, used a ladle to try and imitate the squiggly pattern of a typical funnel cake. This did not work well, and the cakes turned out sad and flat, not puffy.

Frying in hot oil is not something I like to do often, and these cakes only reinforced why. Drizzling the batter in my substitute for a fryer, a cast iron pan, led to an interesting game of dodging hot oil as it spat and splattered.

But once I got past the initial drop, the cakes fried pretty well. The flatter part was too doughy, but the edges — the only part that actually got golden brown — were crispy and to my surprise, had the sweet, pancake-like taste of a typical funnel cake. After dusting the cakes with powdered sugar, I ate them sitting in the grass in the heat of the sun, attempting to recreate the feeling of sweaty, people-packed days at the Three Rivers Arts Festival.
© 2023 Pittsburgh City Paper