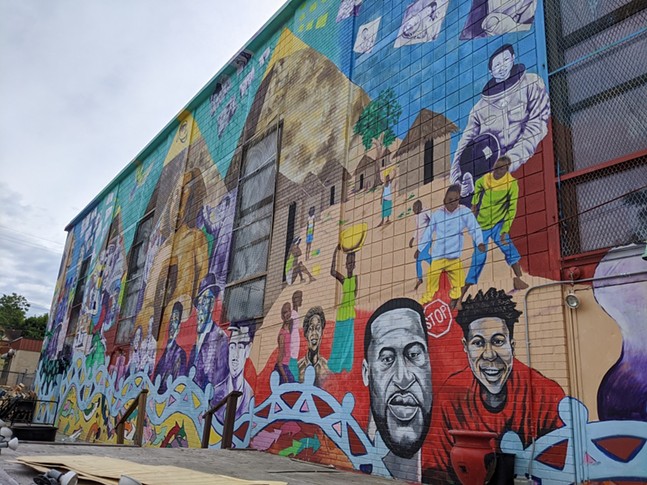 CP photo: Amanda Waltz
Black history mural on the Community Empowerment Association building in Homewood
To understand the power of the George Floyd protests now gripping the country is to understand the extensive history of Black oppression in the United States, from the atrocities of slavery to the current fight against police brutality. Now a mural in Homewood will depict that history and serve as a teaching tool for generations to come.

Earlier this week, international mural artist and Pittsburgh native Kyle Holbrook led a group of 100 young artists to create a giant mural on the back wall of the Community Empowerment Association (CEA) building in Homewood. Presented as part of the Homewood-based Moving Lives of Kids (MLK) Mural Project — of which Holbrook serves as the executive artist — the project is described as a "tribute to victims of police brutality and racism."

“There's no mural like it in the city,” says CEA executive director T. Rashad Byrdsong.

He goes on to explain how each image in the mural is connected to a certain time frame in “the African American struggle.” Groupings include various influential activists, musicians, and athletes, as well as military figures, with Black soldiers from the Civil War and the Tuskegee Airmen of World War II.

The mural also references events or people omitted from history books. This includes the 1921 Tulsa Race Massacre in Tulsa, Okla., where Greenwood, a thriving, self-sustaining Black community, was completely wiped out by white mobs. While the event, which left hundreds dead and destroyed Black businesses and homes, has been discussed more recently, its general obscurity serves as an example of Byrdsong's belief that public schools have “never focused enough on African-American history” or culture.

To help remedy this, he and Holbrook want to make the mural into a sort-of outdoor museum by adding bar codes to the piece that people can scan with their smartphones to access audio or visual tutorials about each image. They hope to obtain grant funding to make the bar code component happen.

The two men believe it will also help younger generations understand and connect with the tradition of racial struggles in America.

The issues driving the current protests are no surprise to Byrdsong, a 71-year-old former Black Panther Party member and civil rights activist, or Holbrook, who, as a teen, twice became the victim of police brutality after being arrested in Penn Hills and later in Cleveland, OH. He says also experienced racism as one of the few Black students at the city's Central Catholic high school, where he says he was kicked out after punching a student who called him the N-word.

“Racism took me down a slippery slope,” he says.

The intergenerational connections are done explicitly on the building's sidewall with a portrait of the late rapper Nipsey Hussle. Nipsey, who was fatally shot in 2019, is pictured with John Huggins and Bunchy Carter, two Black UCLA students who, in the 1960s, tried to help the community as leaders of the Black Panther Party.

In 1969, Huggins and Carter were found shot dead on the UCLA campus. 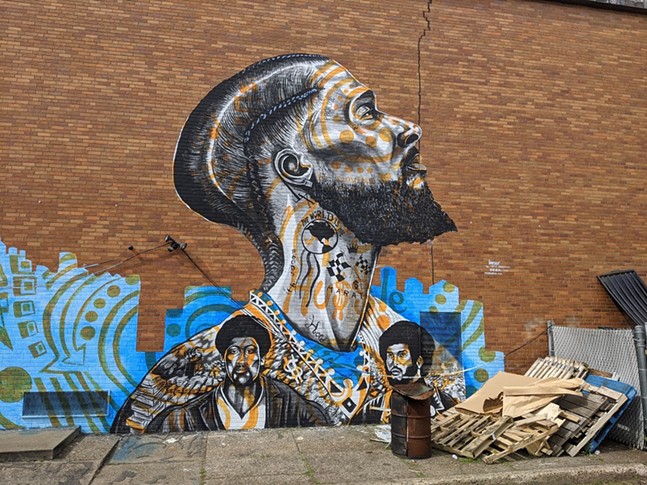 CP photo: Amanda Waltz
Nipsey Hussle with John Huggins and Bunchy Carter, part of the Black history mural in Homewood.
Byrdsong says that, like Huggins and Carter, Nipsey was trying to use his position to help his community. Before breaking into music, Nipsey, born Ermias Joseph Asghedom, grew up in Los Angeles, where he was surrounded by gang culture.

“He was paving the way for young people to get out of that type of environment and behavior,” says Byrdsong.

While Holbrook admits he struggled with a lot of issues growing up in Wilkinsburg, he could always turn to art as a haven and wanted to find ways to help young aspiring artists. He says the MLK Mural Project gave a group of Homewood teens, all between the ages of 14 and 18, the chance to hone their skills and build their portfolios in case they decided to pursue an art education or career. He adds that 25 of the artists were also paid $1,200 each for their work.

Holbrook says the mural is a work in progress, with Byrdsong adding that he would like to see it wrap around the entire building. They hope the work will attract people to the neighborhood and be used in an instructional capacity by Community College of Allegheny County and the University of Pittsburgh, both of which have offices in Homewood.