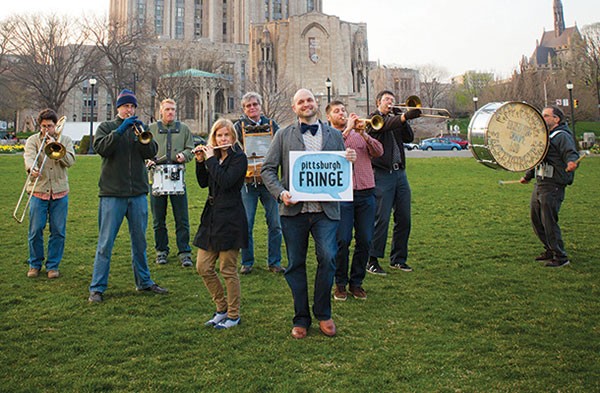 "I love good theater," says Dan Stiker. "It makes you think. It challenges you, and challenges what you think you know."

At the moment, what local audiences know about theater itself might not include the pleasures of fringing. With Stiker's help, that's about to change.

This weekend, Pittsburgh joins cities like San Francisco, Philadelphia, New Orleans, Washington, D.C., and the great-grandaddy of them all — Edinburgh, Scotland — by hosting the first Pittsburgh Fringe Festival. The festival for edgy and below-the-radar work takes place May 2-11, with 26 individuals and troupes performing at various venues in Shadyside.

Stiker, a North Hills High graduate, studied theater at Point Park University before moving to New York City. After working as a performer, stage manager and director with street-theater troupe The Beggars Group, he returned to Pittsburgh. Here he co-founded Blankspace Arts, and worked as an actor, director or lighting designer for Stage 62, the Black Sheep Puppet Festival and more. But he believed that Pittsburgh needed a Fringe, and last year, he decided it was time.

Fringe fests, which started in 1947 with Edinburgh's inaugural event, cram multiple theatrical presentations into several locations during a short period of time. Because of the event's turn-and-burn nature, with a single venue potentially housing multiple shows daily, fringe works tend to be self-contained, with minimal production values. One-person shows, storytelling, puppetry and original pieces compose the majority of fringe offerings, each usually running less than an hour. Patrons dash from venue to venue, seeing as many as a dozen pieces in a weekend.

Pittsburgh's is an unjuried fringe, giving all prospective applicants an equal chance for inclusion. "You have an idea, you want to create theater, we'll give you that platform," says Stiker. Hopefuls were not selected based upon the merit of their work. Rather, at January's kick-off party, applicants' names were simply pulled out of a hat (specifically, a vintage top hat provided by Eons Fashion Antique owner Richard Parsakian).

A good many names pulled were local. Producing companies Cup-A-Jo and Thoreau NM, and dance troupes including the Murphy/Smith Dance Collective, will contribute, and known area playwrights Andrew Huntley and Michael McGovern are on the roster. There are also visiting artists like San Francisco-based musician and monologist Joe Medina (see sidebar).

Much of what will be seen can be categorized as traditional plays, like No Name Player's [best imitation], by Jeremy F. Richter. Other solo acts include veteran local musician and performance artist Stephen Pellegrino's The Accordion Monologues, about growing up in the Mon Valley, and the classic Irish tale of Cuchullain, as told by Alan Irvine. Also in the line-up are Fork Full of Noodles — Live — based on the political-satire video series by comic Krish Mohan's Raman Noodles Company — and a concert by the Allegheny Bilge Rats Shanty Choir, singing songs of the seafaring life. 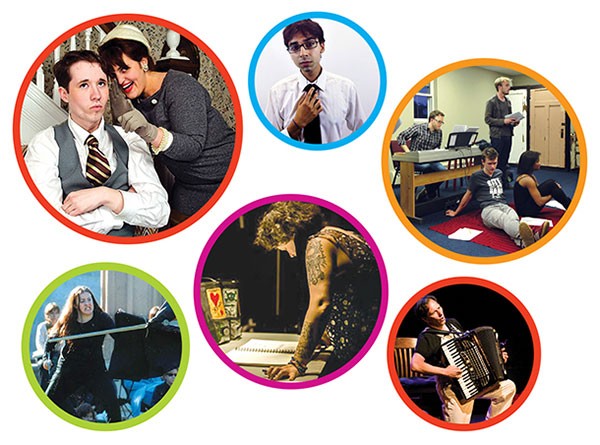 And even a fringe fest can embrace traditional theatrical source material: Shakespeare's fights, for instance, take the spotlight in the stage-combat work by Brawling Bard Theater; his words inspired the Mad Muse's musical monologue "A Well Balanced Madness"; and Footlight Players revises A Midsummer Night's Dream for younger viewers. Also for younger audiences is Tasty Monster's adaptation of the classic "Ferdinand." Visiting artists from as far as the U.K. and as close as Altoona introduce themselves with vaudevillian antics and coming-of-age stories.

Shows are staged up to four times each. Fest venues, all along the Ellsworth Avenue corridor, include Steel City Improv Theater, Gallerie Chiz, the Boys & Girls Club and Winchester-Thurston School.

In addition to contributing two unique and jam-packed weekends for audiences, the Fringe — supported in part by the Sprout Fund — seeks to enhance relationships between artists. While Pittsburgh is climbing the ladder of international credibility with contributions to food-and-beverage culture, museums and galleries, and outdoor pursuits, it has yet to make similar leaps in the performing arts. It's not that what's offered on stage falls short: The theater community, after all, has grown slowly and surely in recent decades, with dozens of maverick companies bridging the gap between the "Let's put on a show!" mindset of community troupes and the "Let's put on a show with a fuck of a lot of money!" mentality of theaters that are as much business as show.

Yet as Stiker says, "We have all these theater companies, but the community isn't necessarily here." One mission in progress is creating shared audiences by enlisting established theaters to offer discounts to festival patrons. Pittsburgh Irish & Classical Theatre has signed on, and other companies might follow, Stiker says.

Stiker wants the Fringe Fest to grow Pittsburgh's sense of collectivity, strengthening the environment in which we create and experience art for everyone. While the Fringe can easily stand alone, Stiker hopes that it will also help local artists stand together.