Kelly McAndrew turns in one of the most fully realized, harrowingly thought-through performances I've ever had the privilege to see. 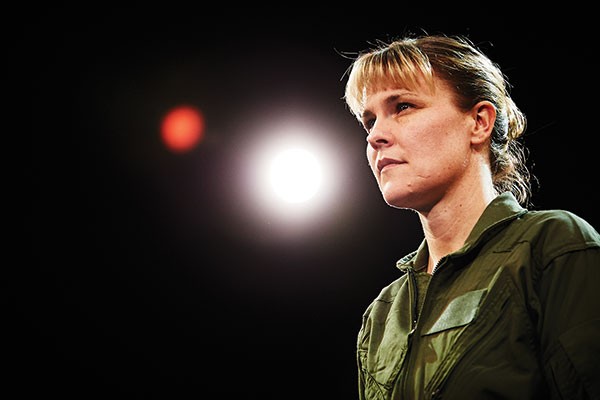 America just ended the longest war in our history: After 12 years of fighting, the war in Afghanistan is officially over. How many knew that? More to the point, how many even knew it was going on?

The sole purpose of our great military minds, who are aching to avoid another Vietnam, has been to sanitize war: eliminating the draft, embedding journalists, forbidding photos of military coffins and, most horrifically, introducing drones.

Playwright George Brant explores how technology has ushered in a brave new world of warcraft with Grounded, now at City Theatre.

At the top of this one-woman show we meet the Pilot, an unnamed F-16 flying ace. She's full of bravado, spinning stories filled with the romantic iconography of the fighter pilot — a female version of Tom Cruise in Top Gun.

An unexpected marriage and child lead to a desk job, but after a few years, she finds she's missing the wild blue yonder and dons her flight suit again. However, the world has changed, and she's now fighting a new war: piloting drones over Afghanistan with orders to kill the guilty, as determined by a committee of voices talking in her headset.

Brant's genius as a playwright is on full display here. The Pilot's transition from cockpit to armchair allows the play to present one of the most devastating depictions of war I've ever seen. Our heroine sits in a trailer on the outskirts of Las Vegas, remotely launching rockets at people halfway around the world ... and when her shift is over, she drives home and has dinner with her husband and kid.

The "romance" of war is gone — no high-flying, banner-waving moments of bravery or danger. Grounded shows war for what it is, and always has been: people killing people they don't know for vaguely defined reasons. The cold, mechanical nature of the warfare revealed by Grounded was actually making me queasy. And that's a testament to Brant's extraordinary achievement with this play.

Or at least the first two-thirds. There are several different ways this play could have ended, and I feel like Brant chose the least interesting. But even if the final 25 minutes weren't as blisteringly original as the first 65, they're written with the same strength and seamless, accumulating power.

And with the absolutely riveting direction provided by Jenn Thompson, I don't think I've ever seen an actor working so completely in sync with a playwright. Kelly McAndrew turns in one of the most fully realized, in-the-moment, harrowingly thought-through performances I've ever had the privilege to see. One of the joys of Brant's writing is how he moves us from Point A to Point Z without any discernible transition; McAndrew's characterization is similarly gifted, sliding obliquely from high in the sky to somewhere quite far below. Thompson keeps actor and playwright in perfect lockstep, and the result is one helluva night of theater.