Underneath the Lintel at 12 Peers Theater | Pittsburgh City Paper

Underneath the Lintel at 12 Peers Theater

There's not a second of this 80-minute play that you're not swept up in the journey. 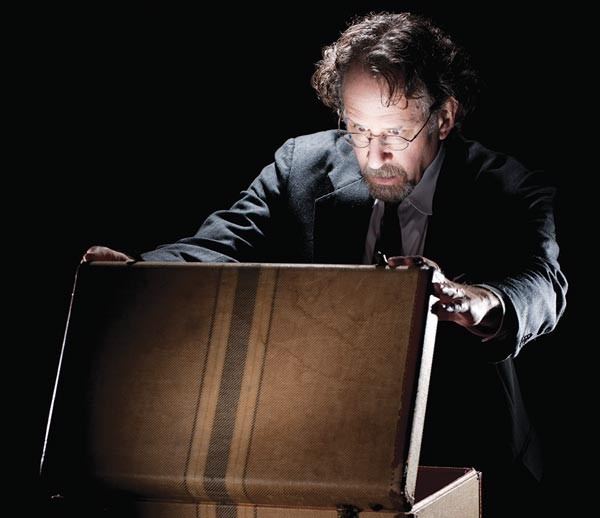 Photo courtesy of Craig Thompson Studio.
Randy Kovitz in Underneath the Lintel, at 12 Peers.

Billed as an "existential detective story," Glen Berger's Underneath the Lintel (presented by 12 Peers Theater) is surely one of the oddest plays you're going to see this year. I've been pondering how to describe the experience and I'm not having much luck. It might be easier to just give you a précis of the plot.

Then again, maybe not. There's a mystery at the center, so even relating the story is a bit tricky. An unnamed Dutch librarian — whom the word "mousy" doesn't even begin to describe — discovers a hundred-year-overdue book. Unable to let it go, he becomes obsessed with tracing the borrower, which sets him off on global adventure in search of ...

... and that's where I need to stop. The Librarian finds himself chasing a mythical figure who, he comes to believe, is fact, not fiction.

He relates his quest at a sparsely attended public gathering in England (we are the audience for the lecture) after having travelled an enormous distance: physically, emotionally and spiritually.

But ultimately, the mystery might not matter. The story, in fact, doesn't really matter. On reflection, I don't think you can call Lintel (2000) a play; it's more a meditation on the random chaos of the universe, the utter absence of any God and the dearth of meaning — or rather, "Meaning."

Berger has couched these ruminations in the confines of a plot, but that deception is just the vehicle he uses to advance his thoughts.

Let me rush to say that I didn't care one bit that it's not a play. Berger's writing is so impeccable and precise, his language alive and insightful, and his ideas mind-bendingly huge yet intricately personal, that there's not a second of this 80-minute intermissionless play that you're not swept up in the journey.

And that trek is given depth and immediacy by Randy Kovitz's exquisite turn as the Librarian. With direction by Kovitz and Cameron Knight, not a single false note is sounded, and Kovitz's relentless refusal to overplay and/or over-explain is what gives this Pittsburgh-premiere evening its powerful punch.

You've never be quite sure what you've just seen, but you'll be grateful for having seen it.