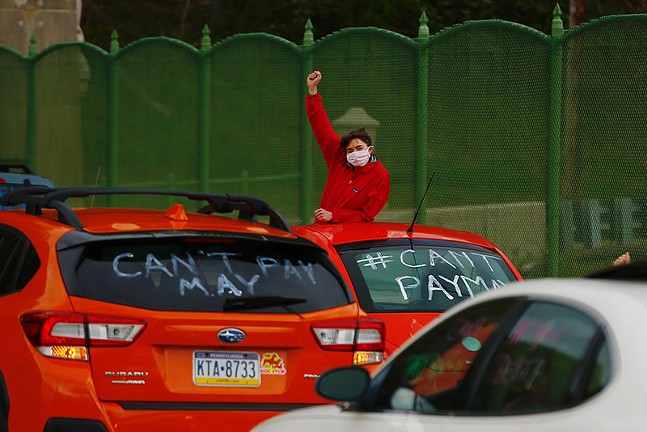 CP photo: Jared Wickerham
A #CantPayMay drive-by protest in Pittsburgh on Fri., May 1
Today, dozens gathered in cars and held a drive-by protest throughout Pittsburgh calling for city, county, state, and federal officials to support freezing rent and mortgage payments for the month of May.

In total, 42 cars met in the parking lot of the former Shop 'N Save in the Hill District. Signs reading “Cancel Rent” and “No Pay May” adorned many of the side and back windows of the cars.

CP photo: Jared Wickerham
A #CantPayMay drive-by protest in Pittsburgh on Fri., May 1
The protest was organized by labor and social justice activism group Pittsburgh United. The line of cars, followed by Pittsburgh Police escort, drove to the Allegheny County Jail, the office of U.S. Rep. Mike Doyle, and then finished at the Greenfield Bridge. At each stop, cars stopped in the street and honked their horns to list demands. Social distancing was largely observed at each part of the protest, and all protesters that exited their cars during the more than hour long event wore face masks.

“This is a national call,” said Pittsburgh United organizer Celeste Scott before the cars started moving in the Hill District. “We demand support to cancel rent.”


BREAKING: Dozens of cars lining up in the Hill District for a car protest, calling for rent/mortgage freeze in Pittsburgh, Allegheny County and Pennsylvania. pic.twitter.com/6lB5e4lGgR

According to housing advocates, nearly 12 million people were spending half of their paychecks on rent even before the coronavirus pandemic. Pennsylvania courts have ceased evictions and utility shut-offs during the pandemic, but no decision has been made concerning rent or mortgage freezes. More than 1.6 million people in Pennsylvania have applied for unemployment benefits since the closures were announced.

The protesters were demanding rent and mortgage freezes in Allegheny County and Pennsylvania, as well as supplying rent forgiveness funds, during the pandemic and for at least 90 days after stay-at-home orders are lifted. They also want the federal government to zero out rent and mortgage payments nationwide, pass a nationwide eviction and foreclosure moratorium, ban utility shut-offs across the country, and provide a minimum of $2,000 in cash assistance to all American residents.

CP photo: Jared Wickerham
A #CantPayMay drive-by protest in Pittsburgh on Fri., May 1
The protesters have garnered some political support. State Rep. Summer Lee (D-Swissvale) didn’t attend the protest, but she said in a press release that “Everyone should have safe, accessible, sustainable, affordable housing all the time, and especially during a pandemic.”

Lee said it was “essential” that Congress include canceling rent and mortgages in the next stimulus package, and advocated for statewide and county-wide freeze on rent and mortgage payments until "everyone is back on their feet.”

“All Americans deserve infrastructure that doesn’t shatter in the face of a crisis,” said Lee. “All of us deserve to be able to carry out shelter-in-place directives, without sacrificing our livelihoods. A quarantine isn’t possible without housing security.”

Congressional candidate Jerry Dickinson (D-Swissvale) is also calling for the federal government to pass a rent and mortgage freeze.


Millions of Americans have lost their lost their jobs & are struggling to get by. We must #CancelRent and we must do it NOW.

When the protesters arrived at the Greenfield Bridge, the cars stopped and blocked two lanes on the bridge. A third lane was left open for cars to let vehicles pass. Protesters chanted “fight fight fight, housing is a human right” and other protest songs.

CP photo: Jared Wickerham
A #CantPayMay drive-by protest in Pittsburgh on Fri., May 1
According to organizers, the original plan was to then hang a large blue banner that read “Cancel Rent” on the outside gates of the Greenfield Bridge, so that drivers traveling on Interstate 376 could see the sign. However, Pittsburgh Police objected to this, and they were not allowed to hang the sign on the outside of the bridge.


Protestors for #cancelrent #cantpaymay were eventually allowed to hang their sign on the Greenfield Bridge fence:

Pittsburgh Police spokesperson Chris Togneri said in a statement to Pittsburgh City Paper that “the protesters wanted to hang a banner on the outside of the fence, which would have created a major hazard if it were to drop onto traffic on the parkway below.”

After discussing with police officers, protest organizers eventually hung the banner on the inside gates of the bridge briefly, before taking it down after the protest ended.
© 2023 Pittsburgh City Paper