Gov. Wolf announces that Allegheny County, Pittsburgh area will not reopen on May 8 | Pittsburgh City Paper

Gov. Wolf announces that Allegheny County, Pittsburgh area will not reopen on May 8 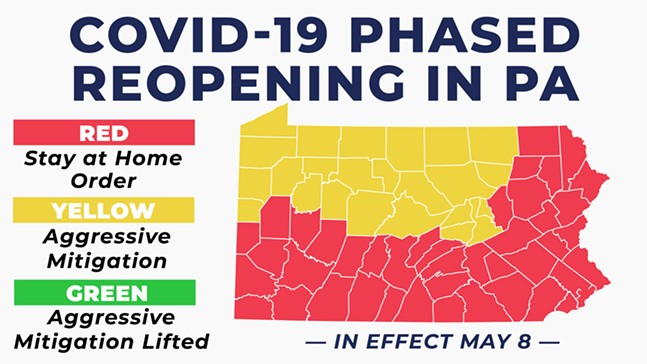 Gov. Wolf's map of COVID-19 Phased Reopening in PA
Gov. Tom Wolf announced today that 24 Pennsylvania counties will be reopening next week with some COVID-19 restrictions lifted. However, Allegheny County and its surrounding counties that make up the greater Pittsburgh metro area, are not on the list.

Wolf said that those counties would move into the "yellow phase" of his reopen plan on May 8.

According to a press release, “These counties were deemed ready to move to a reopening — or yellow phase — because of low per-capita case counts, the ability to conduct contact tracing and testing, and appropriate population density to contain community spread.”


“Your actions will guide our future,” said Wolf.


Hair and nail salons are also restricted from opening in yellow phases. "It is impossible to practice social distancing when you have a hands-on treatment," Levine said at the press conference.

When asked why Allegheny County was not included in the list of reopenings, Levine said, "The southwest region is not yet moving from red to yellow because of population density."

All counties who remain in the red stay-at-home order will be required to do so for at least several weeks before they will be considered for reopening.

“Every human-to-human contact is a chance for the virus to spread, so more contacts mean a higher likelihood of an outbreak,” Wolf said in the press release. “If we see an outbreak occur in one of the communities that has been moved to yellow, we will need to take swift action, and revert to the red category until the new case count falls again. So, Pennsylvanians living in a county that has been moved to the yellow category should continue to strongly consider the impact of their actions.”
© 2022 Pittsburgh City Paper