At the Society for Contemporary Craft, ENOUGH Violence hits hard

There's nothing particularly graphic or gory, and that might be part of why we're shaken 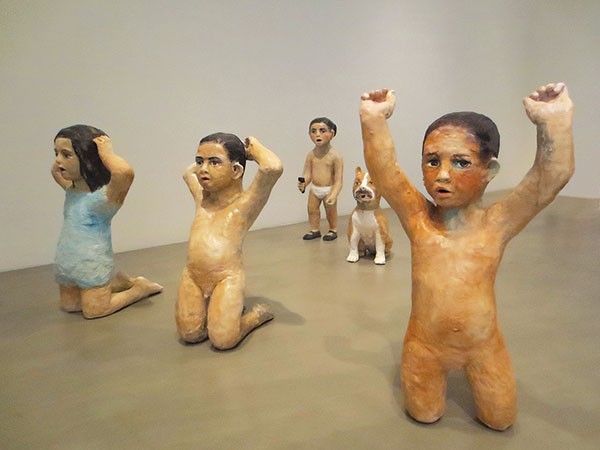 ENOUGH Violence: Artists Speak Out, at the Society for Contemporary Craft, is clever, insightful, empathetic, haunting, sharp, compelling and ultimately terrible in its efficacy.

Curated by director of exhibitions Kate Lydon, it gathers work from 14 artists, local to international, creating in metal, fiber, video, ceramic, found object, mixed-media, beads and glass, with results stunning and disturbing. The individual pieces are visually arresting viewed simply from an aesthetic perspective. But as we absorb their symbolic resonance, they become jarring, and force us to react.

While this is an incredibly important show to witness, it's often very hard to take. There's nothing particularly graphic or gory, and that might be part of why we're shaken by it; we're not looking at the software carcasses that litter gaming battlegrounds, the media images of bodies left behind on real ones. We've desensitized ourselves enough to be no more moved by the latter than we are by the former. But here, we're not encountering incidents of violence. We're coming face to face with violence as a force.

The centerpiece is probably the work used to advertise the exhibition, a contribution by Claudia Alvarez. She's a Mexican-born, New York City-based artist whose work focuses on the innocence of children regardless of the corruption that surrounds them. "El Chupon II" is at first nothing more than a life-sized ceramic sculpture of a toddler in pink hoodie pajamas, pacifier stuck in mouth; closer inspection shows she's toting a gun. As an emblem for the show, it's a smart choice; it's cute but deceptive, then you get it and for a second it's almost funny as your brain scrolls through all the precious yet vicious baby animals and kiddies overflowing in the lowbrow art world. Then it hits you in the gut. Alvarez is also represented by "Pero Pendiente" — more life-sized sculptures, this time with one toddler and his dog holding three other tykes at gunpoint, on their knees, hands up or on heads, backs to him, execution-style. This time there's not the hint of a joke.

In some pieces, the innovation of material plays a major factor in the success of the work.

Using wire, wax and canvas, Doug Beube refashions volumes of the Encyclopedia Britannica into explosives, building bombs of knowledge to burst bags and vests. Beth Barron's wall pieces beautify the wounded and are intriguing if you can get beyond the fact that they are crafted, somewhat repulsively, out of found Band-Aids. Boris Bally sculpts the ephemera of tradition and protection out of gun parts, including a spiny, skeletal Native American necklace composed of gun triggers, and a menorah out of pistols.

Several artists focus on violence against women, ranging from the specific intimacy of domestic assault to the general dehumanization of societal debasement. Maimuna Feroze Nana's cloth dolls are clumsy, amorphous blobs, their features blurred and bruised, bodies wonky and straining; Joyce Scott's small beaded sculptures twist and turn in desperation, searching for escape. Julie Sirek's wardrobe of miniature dresses is identical in pattern and fabric, but individualized through burning, shredding and stitching. There is one dress for each woman who perished as the result of domestic violence in Minnesota in 2009. Thirty total.

One of the most uncomplicated and affecting works is "I Speak Not For Myself," by local Blaine Siegel. In this short video, Siegel accompanies audio of Malala Youssafzai — the young Pakistani education activist whom the Taliban attempted to assassinate as she rode the bus home from school — with images of Wilkinsburg High School; Siegel serves as artist-in-residence at the school, which ranks, statistically, among the most violent in Pennsylvania. We see signs, hallways, trophies. But we see no students. The chairs and cafeteria tables we glimpse are empty. Viewing a school absent of children while listening to a young girl forgive those who tried to silence her for her commitment to knowledge is absolutely chilling.

With this exhibition, we're required to confront the psychology of violence, its breeding grounds, conception, nurturing and growth, not as incidents or statistics but as a state of mind, and of life, that has become epidemic.