This morning, District 4 Councilor Natalia Rudiak introduced legislation for the city’s first Open Data Ordinance. The legislation would release a wide range of data collected from the city to the public, making it available for use in a variety of applications.

“The possibilities are endless,” Rudiak said at a press conference announcing the legislation. 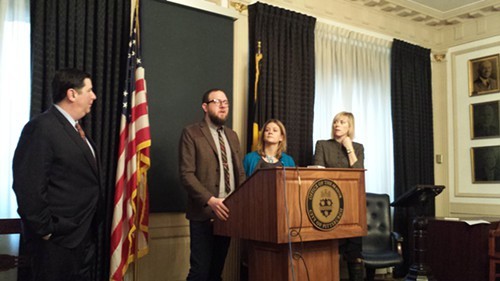 Similar legislation has been passed in 19 cities throughout the country. There software developers have built applications that include smartphone apps for monitoring snow removal and pothole paving response times — everyday concerns of importance to city residents.

“It can make life easier in the moment,” Rudiak said.

But beyond the practical applications of open data, the legislation would also make city government more transparent. Traditionally much of this data must be requested through the Freedom of Information Act and Pennsylvania’s Right to Know Law.

“The raw data we collect doesn’t belong to us,” Mayor Bill Peduto said. “Anyone from the public should be able to get information.”

Open data is only one aspect of his administration’s plan to maintain transparency. From day one in office, Peduto has made his schedule available to the public and plans to broadcast meetings with department directors.

“We want to blow off the doors of this building in providing information to people,” Peduto said.

But it’s not just about the data being transparent. Having a system of open data also provides a greater opportunity for data driven government. An open data platform can be used monitor trends such as the financial costs of different public works services like pothole paving and street light replacement.

So far the financial cost of implementing open data will include $100,000 in workforce costs. The rest of the costs will be tied to technology upgrades already slated for city government.

“Every single department in city government needs a tech upgrade,” said Peduto. Adjusting systems for open data will be built into that.

"Once we get some feedback from the community about what data sets are most pressing we can go from there," Meixell said.