"We as human beings are all connected by the ludicrousness of life." 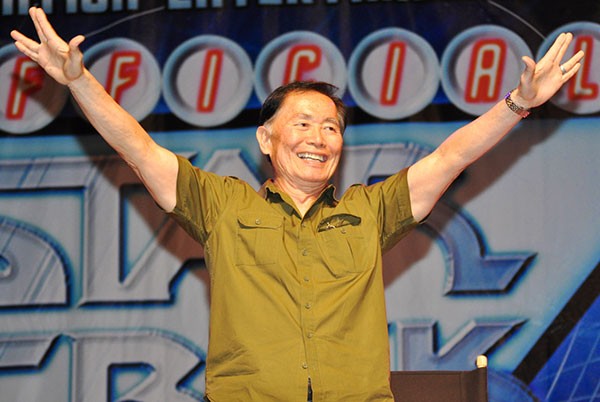 George Takei spent three seasons playing Lt. Sulu on the original Star Trek television series. Now, more than 40 years later, he's entertaining a new generation of fans, thanks partly to a social-media presence that includes a Facebook page with nearly 5.2 million likes and a Twitter account with more than 916,000 followers.

Imprisoned in a Japanese-American internment camp during World War II, Takei has become a civil-rights activist, having been a vocal supporter of marriage equality and LGBT rights. In 2005, he came out as a gay man and in 2008 married Brad Altman, his partner of 26 years. Takei, who appears Dec. 6-8 at the Steel City Con at the Monroeville Convention Center, talked to City Paper from his home in Los Angeles.

You've visited Pittsburgh several times over the years. What are some of your impressions of our city?

I've been coming to Pittsburgh quite frequently over the years, primarily for Star Trek conventions. Last year I was there for four months working on a Nickelodeon show called Supah Ninjas. We were quite the presence there in your city for awhile and as a matter of fact, our soundstage was an old, abandoned steel mill. And it felt like a steel mill when we worked there in the summertime.

I have nephews who will be amazed that I'm talking to Hologramps. They'll finally believe I do something worthwhile for a living.

Well, I'm glad I can help raise your esteem within your family. [Laughing] You know, when I first arrived in Pittsburgh in the 1970s, I was expecting the classic, industrial, soot-covered city, but you guys really know how to make a first impression on a visitor. You come through that tunnel and see that skyline with that black, gothic glass tower and those two great historic rivers coming together -- the Monongahela and the Allegheny – at a triangle. It really is Gotham City. You have that gothic, urbanized part of downtown and you have your industrial history right there along the river with the bridges going across.

You were here for four months; did you get a chance to take in much of the sites?

The delights and cultural grace of your city are also incredible. I'm a theatre person and your public theatre is a real theatrical pleasure. I think you're most blessed because you have people who are proud of their city and bring imagination to your built heritage. The very fact that we worked in a former steel mill; you know it could have laid there derelict and empty, but you had entrepreneurs who had a creative idea and transformed it into a soundstage. It's the human resources of a city that really keeps a city vibrant and alive.

You're coming into town for the Steel City Con and you're no stranger to these types of events. Have you done them consistently throughout your career?

I have because I think it's one of the responsibilities that we have. You know, Star Trek is still very popular. We have a new cast now playing our parts in the movies and three years from now, Star Trek will be 50 years old. With this kind of longevity comes amazing, dedicated, devoted support from the fans. I think it's important that we who benefitted from that support go out there in person and thank them personally for it. And it's not just the original fans now, most of them are now members of the AARP. Now it's their children – who are also fast approaching AARP age – who are the dedicated Sci-Fi geeks and nerds. I've now added to that fan base with my work on Supah Ninjas, so I'm insuring the longevity of my career for years to come. Just like that Vulcan greeting, "Live long and prosper," Star Trek has certainly lived a long time and we have all prospered from it so I think it's important that we go to conventions to personally thank the fans who made this longevity possible.

What is it about Star Trek that people have connected to so strongly?

I think there are four things. One is the optimistic view of the future that the show had. So much of science fiction depicts a ruined civilization with humans rummaging around in the ruins, but Star Trek looked at the future with an optimistic view. Two, we told very good personal stories. We were characters that the audience could identify with; the human relationships that we had held the audience's interest. Number three, the technology was fascinating to people, particularly geeks and nerds. And number four, Gene Roddenberry believed in using science fiction as a metaphor for contemporary issues. Whether it was the civil rights movement at the time or the Vietnam War which was tearing the country apart, Sci-Fi was a metaphor for all of those issues.

The Starship Enterprise was a metaphor for Starship Earth and the strength of the Starship lay in its diversity coming together and working in concert as a team and that's what made it possible for the Enterprise to move forward and upwards. I think those four things are still very relevant today, although the issues may be different.

A lot of people believe that show was way ahead of its time. Did you realize that as you were doing it?

I did. We broke ground then and we're way past that now. We had technology that was astounding. We had this little device on our hip which we tore off, flipped open and started talking into and there were no cords attached. This was 1966. Today not only do we talk into it, we text with it, we watch movies on it and we take pictures with it. What the show thought might be possible in 300 years was accomplished in less than 50. Star Trek was groundbreaking then and today we're breaking new ground in reality.

Some Star Trek fans have been known to be pretty rabid and into the show. Do you have any memorable interactions with fans at these conventions?

At one of the early conventions I was asked a question from one of the gathered fans there. This person asked, "When you left Alpha Ceti IV, you left at Warp 3. So why did it take you so long to reach Centauri 14?" [Laughs] That made me think I'd better be prepared for those types of questions in the future. Needless to say, that day I failed.