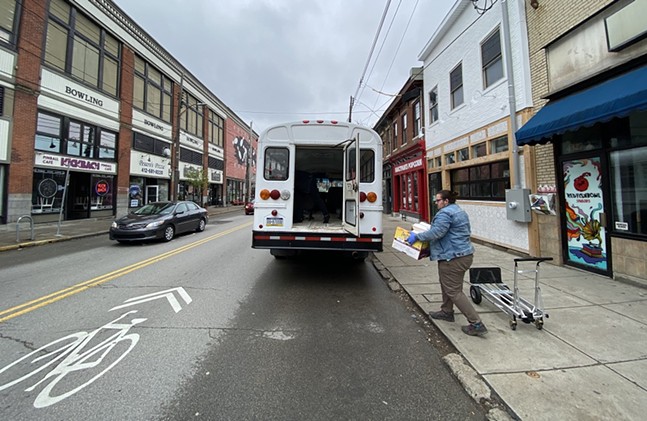 412 Food Rescue and its partners have expanded the bus stop food distribution program after a successful pilot run that provided more than 500 meals to students in the South Side and Hilltop neighborhoods. The program will continue from Mon., April 6-Fri., April 10 by delivering a total of 9,000 meals to bus stops in Pittsburgh’s Hilltop/South, Hill District/East, and West Pittsburgh neighborhoods. Families will receive robocalls for pick-up times, and a map of the designated stops is available on 412 Rescue's Instagram.

The program is still in need of volunteers to help distribute the meals each day between 10:30 a.m.-1 p.m. If you are available, please contact jgeiser@latinocommunitycenter.org.

Three local nonprofits are making sure local students are getting fed through a special food distribution program supported in part by Pittsburgh-born actor Michael Keaton.

412 Food Rescue, A+ Schools, and the Latino Community Center launched a pilot program that would deliver meals to students at their former bus stops. Beginning today, recipients will receive robocalls alerting them when the meals will be distributed at stops near their homes. Latino Community Center volunteers will be present at the bus stops to oversee the process (with social distancing rules observed).

The collaboration drew the support of Keaton, who according to the press release, wanted "to give back to his hometown community by contributing to innovative local projects during the COVID-19 pandemic."

First bus stop pilot complete! 🚌🥙🥦♥️ THANK YOU Michael Keaton for the best birthday present I can wish for in these...


"The driving force behind 412 Food Rescue has always been the willingness of our community to step up and help each other," says 412 Food Rescue co-founder and CEO, Leah Lizarondo. "As a Pittsburgh-area native, it's clear that Michael Keaton understands the power of supporting our neighbors through difficult times, and we're very thankful for his support."

In addition to meals, A+ Schools will provide PPS and Common Core-aligned learning packets for all grades.

The 500 meals given out today were prepared by local restaurants, including Bar Botanico, The Vandal, and DiAnoia’s Eatery, and were delivered by the PriZilla the Print Bus, a decommissioned school bus owned and driven by Allison Butka and Joyce Swope of Etna Print Circus.

According to a press release, Butka and Swope reached out to Lizarondo as plans for this project were forming.

“We figured that we had a massive carrying capacity, easy-to-clean surfaces and the ability to load and unload at a safe distance,” Butka says, “and that food would be an immediate need for many people in our community, so 412 Food Rescue was the first organization we thought of.” 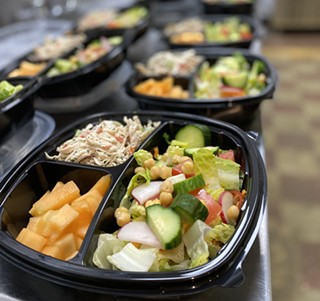 Photo: 412 Food Rescue
Take-home meals made by 412 Food Rescue's Good Food Project.
With public schools being closed indefinitely in response to the COVID-19 pandemic, many area children and teens are left without a key support system. This is especially true for students on reduced and free school-lunch programs, and while PPS responded by making and distributing take-home meals available for pick up, the service was still inaccessible to many.

“This is not realistic for many families,” says Latino Community Center executive director Rosamaria Cristello, who learned of a child in her community who had to walk almost an hour round trip to and from his nearest school to pick up lunch. “I wanted to find a solution to help bring food closer to them.”

Lizarondo believes the current system is not ideal and would leave children vulnerable if they end up having to travel unaccompanied to school pick-up sites.

“As the mother of a second-grader at a public school, I wouldn’t feel comfortable allowing my child to walk to our nearest school alone,” Lizarondo says.

The groups view this first distribution as a pilot run. By proving its effectiveness, they hope it will then be adopted by school districts and other food distribution efforts.

“This is a problem with many moving parts, but, if successful, this effort would make such a difference to children who have mobility limitations,” says executive director of A+ Schools, James Fogarty.
© 2022 Pittsburgh City Paper