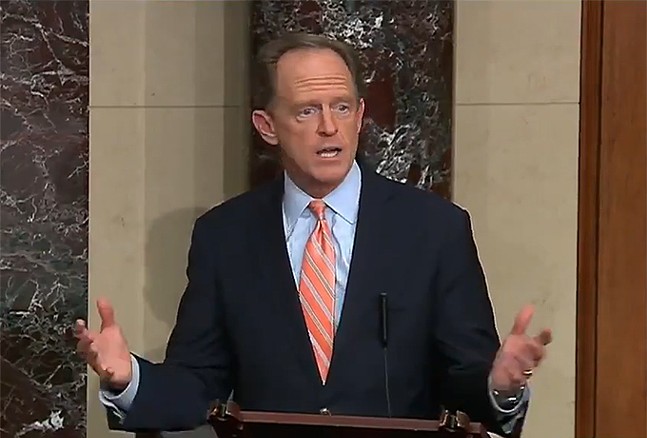 Screenshot from Sen. Pat Toomey's video
Sen. Pat Toomey (R-Lehigh) makes a statement on Mon., March 23.
A multi-trillion dollar stimulus bill could pass through the U.S. Senate today to provide many necessary funds related to the coronavirus closures. If it passes through the Senate, the U.S. House, and gets President Trump's signature, it will provide billions to businesses, public-transit, airlines, and American taxpayers.

The stimulus plan also includes a one-time $1,200 payment for individuals who have filed federal tax returns in the last two years and earned less than $75,000 a year, and $500 for children of tax filers. The bill also increases and extends unemployment benefits by about $600 a week as a way to help people who are out of work pay their bills.

The stimulus plan has its critics, with concerns about bailouts to wealthy corporations like Boeing and other issues, and Pennsylvania Sen. Pat Toomey (R-Lehigh) also voiced some criticisms of the bill, though ultimately, he said he will support it.

However, Toomey told a CNBC reporter that by combining the direct $1,200 payment and extending the unemployment benefits “creates incentives not to work.”


Sen. Toomey: “The combination of unemployment insurance and direct payments is so much that in and of itself creates incentives not to work.”

As of today, Pennsylvania has seen 1,127 positive coronavirus cases and 11 deaths caused by COVID-19. Residents of several counties across the commonwealth, including Allegheny County and Toomey’s home county of Lehigh, have been given stay-at-home orders by Gov. Tom Wolf (D-York). Non-life-sustaining businesses across the state have been told to shut down as a way to stop the spread of coronavirus.

Several of Toomey’s constituents and other social media users took exception to his statements.


Dear @SenToomey: You know what's an incentive not to work?
Fear of contracting a deadly, highly-contagious virus with no known cure or vaccine. https://t.co/bsJ8GKxNWp

Pat Toomey isn’t joining the death cult yet, but he can’t wait to join this fall https://t.co/W5LzBbOKgg

However, Toomey’s anxieties about incentivizing work pale in comparison to three other Republican senators. Sens. Ben Sasse (R-Nebraska), Tim Scott (R-South Carolina) and Lindsey Graham (R-South Carolina) are threatening to hold up the bill because they believe the unemployment benefits would provide more than what some low-income workers make, and that would encourage them to seek the benefits instead of work.

As a response, Sen. Bernie Sanders (I-Vermont) announced he would place a hold over the bill and demand new restrictions on the $500 billion fund the bill has for corporations, unless the three GOP senators dropped their objections to the unemployment insurance expansion.
© 2023 Pittsburgh City Paper