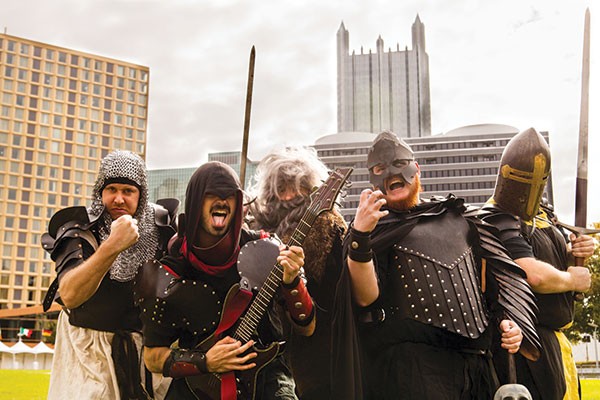 To explain the legend of Dethlehem, it's best to begin at the beginning. So: Fëanor, son of Finwë, created the Silmarils. But these jewels were stolen by Melkor, who fled with them to Middle Earth and made war on elves and men alike. Skipping ahead a bit, we come to 2008, when a group of local heroes joined to fulfill a noble quest.

"We started out as a joke band for a friend's Halloween party," says Dethlehem's drummer, J.T. Penderville.

But lo! They were not entirely a joke band. "We spent the time to make original songs," says Penderville, who along with guitarists Doyle Daigle and Rick Serafini is one of the three original members still playing with the five-piece.

Thus was born Pittsburgh's leading practitioner of Dungeons & Dragons-inspired metal, whose performances feature medieval costumes and stage names like "Overlord Brom" and "Hank the Guy." While every metal band boasts a member that plays an axe, in Dethlehem even the vocalist wields a blade.

"When we put the costumes on, we play different personas," says Penderville. "I feel like I'm more intimidating."

"I'm the opposite," counters bassist Patrick Lammie. "I feel like an even bigger piece of shit."

That can sometimes cause confusion. While self-parodying metal bands aren't new (see GWAR), metal fans aren't universally noted for their sense of irony. During one show, Prenderville recalls, an onlooker saw his black-and-gold tunic and pronounced, "Yellow is not metal."

But make no mistake: "We're not shitting on metal at all," says vocalist Jeff Kerekes.

Indeed, Dethlehem's most recent release, The Ghorusalem Codex Vol. 2, amply demonstrates its brand of harmonic metal: guttural vocals, driving bass lines, thrashing guitars. And that's just part of the experience: There's a comic-book version of Codex — which tells the story of a band of adventurers pursuing an evil sorcerer — and a video of the track "Circle of Deth."

Dethlehem is currently unsigned, although the release of an upcoming third album may change that. And band members confess that after years of stretching every copper piece, the thought of some label support is tempting.

Then again, Penderville reflects, there's something to be said for creating everything — from the costumes to the comic books — on your own. "It's just like playing Dungeons & Dragons," he says. "You create a whole universe yourself."