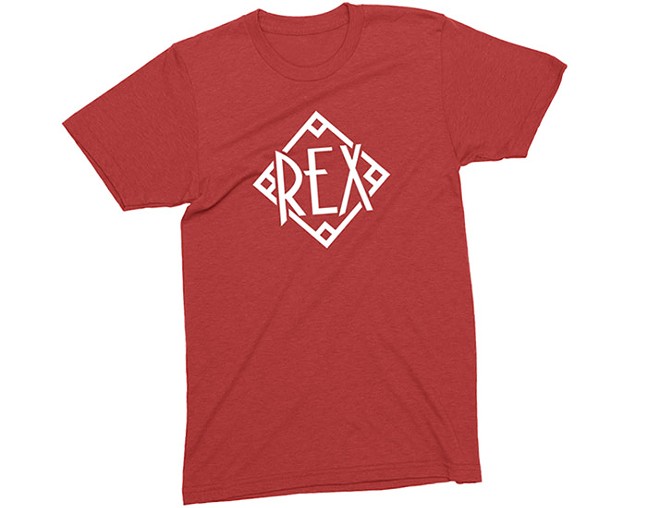 
CommonWealth Press has printed T-shirts and hoodies for The Rex Theater and its independent concert promotions company, Grey Area Productions, since their formation about 10 years ago.

Pre-orders are currently being taking for the shirt at compressmerch.com, which is available in heather red. For those familiar with merch from Grey Area and The Rex, the limited edition shirts will be made in the same comfy material.
Original story, published March 20:
The Rex Theater is officially closed for the foreseeable future. Each and every one of their employees has been laid off and now, they're asking for your help (if you can afford to do so).

"In an effort to generate additional funds for our employees to help them get through this difficult time, we are going to be giving 100% of the total proceeds from the sale of our Rex and Grey Area Productions merchandise to our staff," says Ben Penigar, Rex owner and one of Grey Area's managers.

"We thank you for your support and look forward to seeing you all again once we get through these difficult times together," says Penigar. "Long live live music."

Supplies are limited right now because The Rex and Grey Area get their merchandise from local businesses CommonWealth Press and Pittsburgh T-Shirt Co., which have been ordered to close as of 8 p.m. Thursday night via Gov. Tom Wolf.

If you would like to support without buying merch, direct donations can be made via Grey Area's PayPal here (PayPal charges a fee as "goods and services") or to Penigar's PayPal account here. There is no fee when sent to him as "friends and family." Again, 100% of what they receive will go directly to The Rex Theater employees.