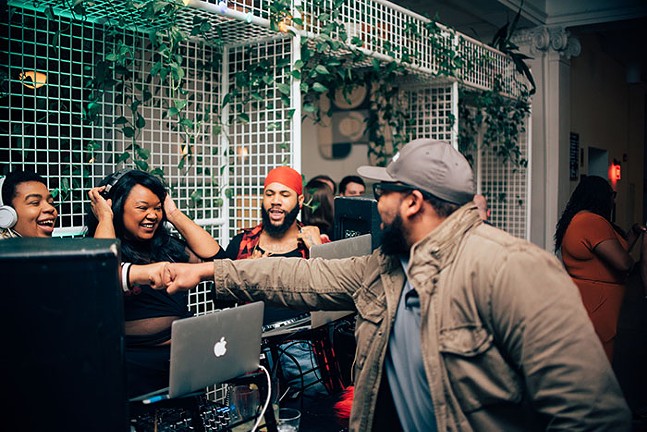 For many, the severity of the coronavirus didn't begin to take hold until concerts, plays, DJ sets, and other arts events began canceling. Many performers and venue employees rely heavily, or primarily, on those events for income, and losing it can be devastating, especially since there's no telling when this type of work might resume.

The PGH Artists Emergency Fund was created to provide immediate financial relief to artists who lost gigs, venue workers who lost shifts, and anyone else in the arts and events community who is in need because of the effects of the coronavirus. Created by Julie Mallis, sarah huny young, Joshua Orange, Aaron Clark, Alex Neal, and Clark Price, the GoFundMe set an initial goal of raising $5,000 to provide a donation of $250 to 20 people in the arts community. Within a day of its launch, the fundraiser had reached its goal, and within two days, it had doubled to over $10,000.

The collective came together in a group chat (social distancing!) to see how they could help out their community. Mallis had a friend in Philadelphia who helped organize a similar emergency fund, and used that as a model for the Pittsburgh version.

"The goal is basically [to help] anyone who has lost wages, which is a lot of people," says Mallis. "And they don't have to be artists themselves, they can be venue staff, people who work events or venues, security, maybe you work bar at the venue. We wanted to include everybody."

The most that applicants can receive is $250, so the fundraiser can maximize how many people can benefit. So far, they have enough to give to at least 40 people.

"$250 in Pittsburgh actually goes a really long way, especially for the artists who are living paycheck to paycheck," says Mallis. "So it's a small amount of money but we're hoping it helps people with their bills, rent, buying groceries, getting medical supplies."

Artists or workers in need of financial help can apply through a form linked on the GoFundMe page. The form is brief and operates on an honor system, asking people how much they need, what expenses they need to pay and when, how much income they have lost from canceled gigs, etc. The questionnaire helps the team do a triage on applicants, giving money first to the people in the most urgent situations. But these questions also serve to document the financial impact the pandemic is having on the local arts community.

"We can look back and we can actually tally up the amount of lost income across artists who applied and share that information publicly, and we've asked people if they'd be comfortable with sharing that," says Mallis.

Orange, one of the other organizers of the fundraiser, sees how this moment can be beneficial to the future of the arts community, even though it's difficult right now.

"We can try to make it serendipitous and if we can rally and unite to try and prevent the spread of a virus then I think we can carry that same energy and sublimate it into being productive to the ends of supporting each other," says Orange, "and maybe not just having this as a model now, but how can we emulate that on a larger scale so we can create legislation that can create funds that can help pay artists."

While the fundraiser has received dozens of small donations, many $50 or less, Mallis says they would like to see the beneficiaries of income inequality, especially those who work for tech companies or large corporations in the city, help out more, hoping that it can continue multiplying well beyond its current amount.