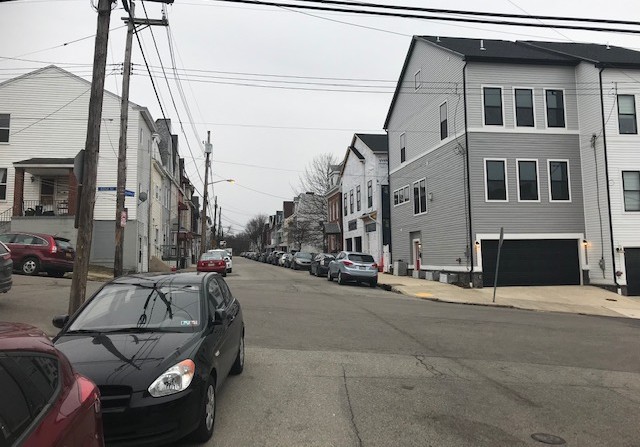 But as neighborhoods experience home flips and new development, many parking garages have followed. These new garages have eliminated on-street parking spaces in neighborhoods, which has ripple effects concerning street design, decreased walkability, and fewer spaces for amenities like trees and greenery.

Today, Pittsburgh Mayor Bill Peduto has introduced a bill hoping to change this emerging dynamic. The legislation is proposing changes to the Pittsburgh city zoning code, which currently requires single-family attached dwellings to have at least one off-street parking space per unit. This typically translates into row houses building a parking garage and a driveway.

According to a press release, this current requirement forces housing developers and homeowners to make curb cuts into sidewalks to provide parking, which makes walking more cumbersome for pedestrians.

“This change will enhance what makes many of our historic neighborhoods so special, and it will encourage more people to walk, help people using baby carriages and wheelchairs to navigate sidewalks, and help residents get to know their city and their neighbors by foot,” said Peduto in a press release.

Eliminating this parking requirement could also help lower home prices since developers no longer are forced to include the cost of a private driveway and/or garage into their development. Minimum parking requirements are typically associated with higher prices to build housing in cities.

This news comes shortly after Peduto expressed some concerns about altering city zoning to encourage developers to construct developments that are more friendly to pedestrians, cyclists, and public transit users. Many transit advocates applauded the bill on social media.


YES! As a Lawrenceville resident, I'm excited about this. Counterintuitively, this will preserve more public parking as curbspace won't be reserved for the owner of the garage, but available to everyone. Some developments have taken half a block of spaces away from public use

Eric Boerer of Bike Pittsburgh tweeted, “this will preserve more public parking as curbspace won't be reserved for the owner of the garage, but available to everyone. Some developments have taken half a block of spaces away from public use.”