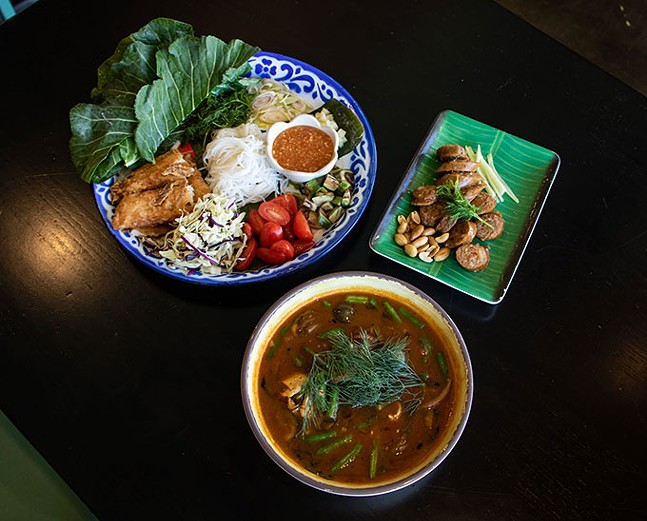 In early September, Norraset (Nor) and Rujira Nareedokmai closed their beloved Thai restaurant, Bangkok Balcony, after a 15-year run. But fans of the Squirrel Hill restaurant can rest easy: The Nareedokmais aren't going anywhere, just shifting their focus a little to the northeast. KIIN Lao & Thai Eatery is now open in Bangcok Balcony's former spot with a mix of Thao and Laotian cuisines.

Because the more than thousand-mile border shared between Laos and Thailand is so blurred — the regions have passed flavors for centuries — I expected the menu to be a jumble of dishes from both countries. But instead, it’s divided neatly in half, the Lao side full of noodle soups and sticky rice; Thai delivering curries and stir-fry noodles. The separation allows diners to see where the two cuisines diverge as well as where they connect. And for the devoted fans of Bangkok Balcony, the split makes it easy to find favorites that were carried over to KIIN. 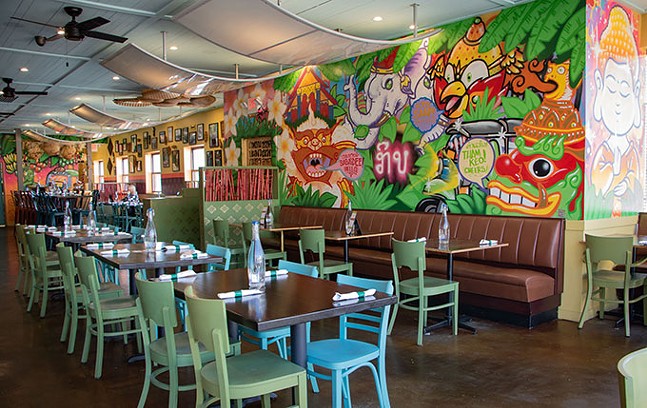 Plates — all from the Lao side of the menu — came in a flood to the table. (This was one of KIIN’s points of service, to serve everything family style and deliver it whenever it is ready.)

The pun mieng rice noodle wraps were an unexpected favorite. I am not always a fan of the build-it-yourself, “deconstructed” approach, but KIIN’s traditional, Lao iteration wasn’t anything like receiving a jar of coffee ice cubes, milk, and “making my own latte.” With so many elements to wrap into a fresh collard green leaf — eggplant, ginger, tomatoes, peanuts, rice noodles, lemongrass, dill, cabbage, fried tofu, and a delicious fermented soybean and pineapple sauce — I relished the ability to control to compose my dish as I wanted.

Siin lod — a dish of sun-dried beef in ginger and black pepper — featured thinly sliced, extraordinarily tender beef matched with a spicy, vinegar sauce and sticky rice (upon request). Unlike a Thai curry's coconut milk-forward taste, the Lao mee kathi felt lighter and more like a broth, similar to a Thai coconut soup. It was heavy with substance — noodles, vegetables, and meat — and not so reliant on the curry to carry the dish.

Lao-style curry puffs were somewhat of a cross between an empanada — with the ribboning to prove it — and a samosa. They had the crunchy crust and fillings of the latter, but were less dense. Instead of the typical chunks of potato and vegetable, the stuffing was rich and smooth. 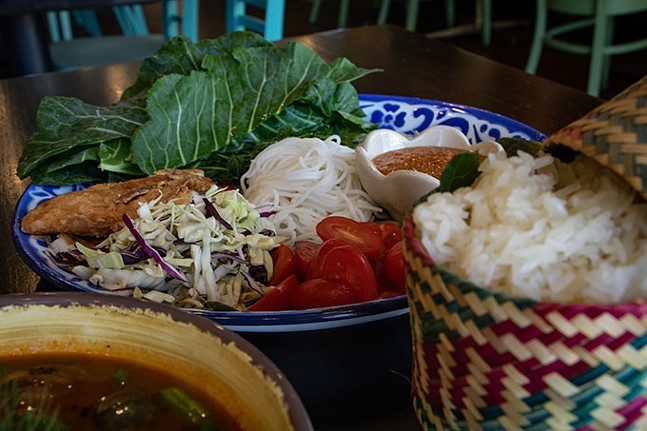 The white tablecloths at Bangkok Balcony have disappeared, the owners working with Lao-American graffiti artist Henley Bounkhong to give their eatery new energy. Every inch — save for the ceiling — is covered in loud murals and patterns inspired by the celebration of the two cuisines. The Nareedokmais' space is as vibrant as their flavors. I can’t wait to go back for more.

1. Cocktail List
Love the flavors of Lao and Thai food? KIIN puts them into cocktails: Look for lemongrass, lime leaf, and more on the drink list.

2. Photos
Walls that aren’t covered by Bonkhong’s graffiti art feature photos of Laos and Thailand, captured by Nor Nareedokmai’s son.

3. Spice Level
Be careful with your spice choice. Even a level four (considered mild) had my nose running.