There's nothing quite like homemade soup. Cheaper than ordering at a restaurant and more flavorful than what comes in a can, nothing beats soup from a home kitchen. Nobody knows this better than Sarah McAlee, the brain behind the popular Instagram account Brothmonger.

Every weekend, McAlee makes two soups from scratch — one vegan, one non-vegan — and shares them with her followers on Instagram. It’s a first-come, first-serve operation; land in her DMs early enough, and you can buy one or two of the coveted quarts.

McAlee started Brothmonger first as a friend-to-friend business, simply expanding on her regular practice of delivering soup to sick friends and family. It was a post from Rick Sebak, whom she sold soup to at the Pittsburgh Vintage Mixer this fall, that propelled her into public renown.

Since then, hyped by influencers and writers, she grew her pool of followers to more than 1,000. And for a business like McAlee’s, that's everything. Without a website, her sales rely on a strong, engaged group of followers.

Buying soup from McAlee is like a game. There’s limited quantity — between 15-20 quarts of the regular soup, 10-12 of the vegan option — and if you snooze, you lose. (The few times I’ve bought from her page, I’ve set multiple alarms on my phone.) Typically, both kinds sell out within minutes of release.

“Some weeks are way more demanding,” she explains. “Not everybody loves every kind.” 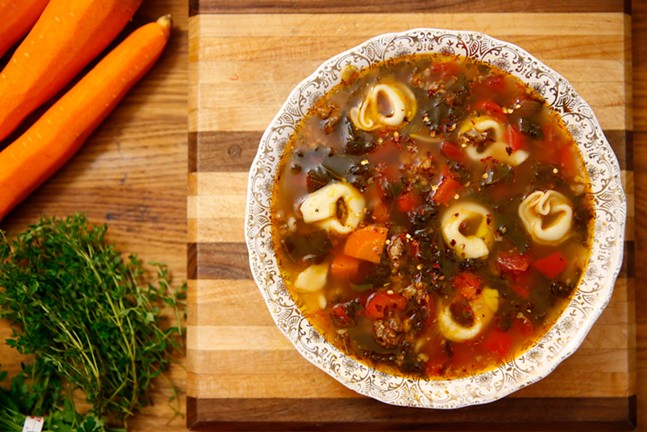 A week featuring broccoli cheddar and vegan French onion meant that McAlee turned away lots of followers, while a vegan lentil curry and sausage tortellini just barely sold out. She may tease the soups throughout the week, but refuses any attempt at pre-orders or reservations. Sunday is the only day her soup is for sale.

The type of soup varies from week-to-week based on what McAlee wants to eat, requests from followers, or ingredients she has on hand. (She makes all of her broth from scratch, which often influences the soup flavors). She’s also trying to incorporate Instagram polls to gauge her audience’s tastes.

McAlee has no idea what the future will bring for Brothmonger; the growing craze for her soup has been surprising enough. Already, she has moved to a commercial kitchen and is now cooking out of Badamo’s Pizza on the North Side. (Anthony Badamo is her former employer and has been a huge supporter of her business.) McAlee is throwing around the idea of hosting pop-ups with local breadmaker Wild Science Bread Co., though she does plan to keep the business on Instagram as long as possible. And she’s not ruling out the idea of cooking full time, but isn’t diving headfirst into a brick-and-mortar.

For now, McAlee is simply going where the soup takes her.