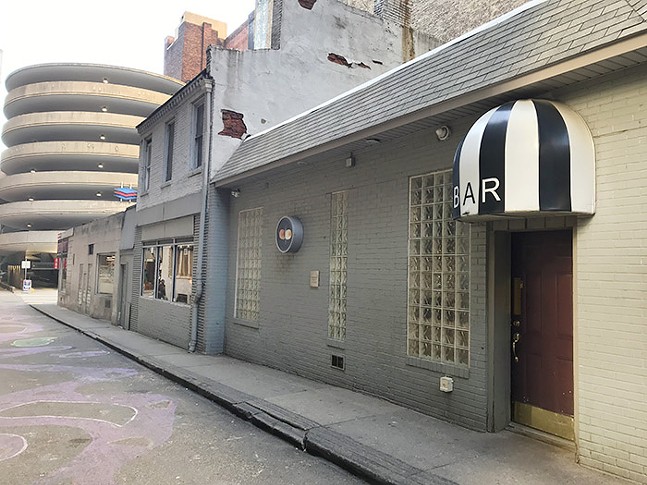 CP photo: Ryan Deto
Entrance to Villa Reale's bar on Strawberry Way in Downtown
Pittsburgh and the surrounding area are home to a lot of bars. Drinking establishments can range from huge breweries, fancy restaurants, neighborhood dives, and trendy eateries. Pittsburgh is also an old-school town that is still home to dozens of locales that have liquor licenses, but aren’t exactly inviting to strangers.

Some “bars” are hidden away in the basement of a home, or rumors say that some only open up one day a year, so they can legally maintain a liquor license. Either way, there are many bars that aren’t advertised or marketed, and they feel content staying that way.

However, Pittsburgh is also seeing a little revival in the drinking establishments that are hidden away, but aren’t exclusive. It takes a little knowledge to find them, but a short elevator ride, a climb up some stairs, or a jaunt through an unsuspecting alley will reveal a welcoming and comfortable place to drink.

This little dive used to be listed only as “Bar” on Google Maps, since that is what the sign on Strawberry Way reads (see above photo). It is in fact a bar, and a Pittsburgh City Paper favorite. The bartenders are friendly and the clientele is peak Pittsburgh. Visitors can walk through the front entrance of the Villa Real Pizza joint beside Wiener World on Smithfield Street or the side back entrance on Strawberry Way. Sit at the bar, enjoy conversation about the places that used to be Downtown. Order a shot and a beer.

Enjoy live dj’s every Saturday from 10p-1a. the (Lounge) is now open to the public every Thur/Fri/Sat starting at 4:30. Photo// @beautyshoppeusa

The (Lounge) at The Americus Club, Downtown

One of Downtown's newest cocktail establishments, the lounge can be reached by entering the door to The Pitt Building (next to Bob’s Sub, and then taking the elevator at the end of the hallway to the second floor). Inside, guests are greeted by an invitingly open space with couches, tables, and ornate dried flowers. Cocktails, beer, and wine, including natural wine, are moderately priced. Grab a Boulevardier and look out the second-floor windows at the Boulevard of the Allies.

This New Years Eve is a celebration of a new decade and forward looking hope. Join us for the evening of unlimited cocktails, along with beer and wine from our menu. Get more information about the event by clicking the link in bio #newyears #newyearseve #nye2020 #pittsburgh #drinks #pittsburghbars #speakeasy #hiddenbar #pittsburgh #pittsburghpa #pittsburgheats #eatpgh #pghfood #412 #eastliberty #burgh #pitt #pittsburghfoodie #pittsburghlove #lovepgh #bar #classiccocktails #newbar

One of the newest hidden bars, Commerce Bar is a legitimate speakeasy. Patrons knock on an unmarked door on Commerce Street (which is more of a back alley in between Ace Lock and Lorelei on Baum Boulevard.) The bar holds about 35 people and waits to be seated are common. Knock on the door, walk inside and the host will put your name on a list, and will text you when your spot is open. Inside, expect some authentic prohibition-era drinks, which rotate regularly.

Tucked in the basement of Omni William Penn Hotel, this fancy bar is modeled to be just like the speakeasies of prohibition. No windows, an attendant at the entrance, and cocktails that hark back to the 1920s. The Speakeasy is dark, but the atmosphere is warm and service is impeccable. To get there, enter the front doors of the Omni on William Penn Place, and then immediately walk down the center staircase. Then the Speakeasy is on the left. Try The Informant cocktail, a great version of a Negroni.

On a side street and up a staircase, is this Shadyside favorite. Not as hidden as the rest on this list, but Le Mardi Gras’ building looks a bit residential so you might miss it. Up the steps is a New Orleans styled space and the oldest cocktail bar in Pittsburgh. The drinks are stiff, and the atmosphere is welcoming and ready to party. Smoking is permitted.

Can a bar be both hidden away and a massive party destination? Bar 11 in the South Side says yes. A windowless space tucked away on the corner of Bradish and 11th streets, the bar offers inexpensive drinks, dancing, glitter bombs, foam, and a good time. The entrance is a yellow door that is clearly marked, but the sign looks like a traffic warning. A college-like atmosphere, so pound some Pabst or chug a mystery beer like you should.