Pittsburgh Party Pedaler allows patrons to work up a thirst

"I heard all this party music, with people laughing. I saw this bike and I thought, 'I want to ride on that.'" 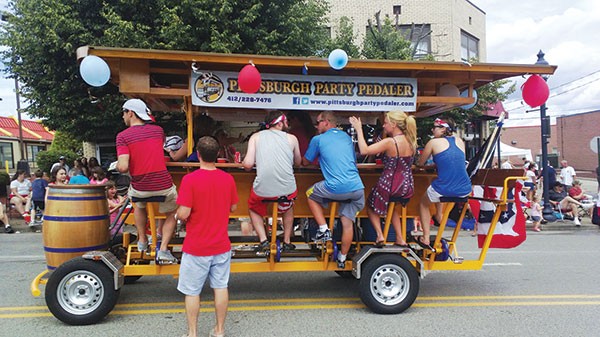 The Pittsburgh Party Pedaler — a bicycle-mounted barroom pedalled by its own patrons — came to Pittsburgh the long way around: from a Steelers bar in Minneapolis. That's where Susan Joseph saw a similar contraption.

"My husband was working there and I was up for the weekend," she recalls. "I heard all this party music, with people laughing. I saw this bike and I thought, ‘I want to ride on that.'"

That was about all it took for the Josephs to decide to become a licensee of PedalPub, which has pioneered the concept in America, and to bring the Party Pedaler home. "It definitely gets more jovial as the night goes on. As the ‘fuel' intake goes a little bit high, it gets more fun," says Bryan Joseph.

When Bryan rings the bell from his driver's seat, up to 16 passengers start pedaling the bike along. "It's kind of like a little parade," he says.

The Joseph family's two Dutch-made bikes have a bar, LED party lights and a digital music hook-up. But because of local open-container laws, party bikers can't take advantage of the 53-gallon keg and tap system mounted on the front of the bike — at least not just yet. "We tried for a variance, but without a specific date or place we couldn't get that," says Bryan Joseph.

So while the Josephs work with their lawyers to legalize on-bike revelry ("We want to do this the right way," says Susan Joseph), the Pittsburgh Party Pedaler operates as a pedal-powered pub crawl. There are currently two tours (Strip District/Downtown and North Shore). Clients can also book a bike for special events.

"We're hoping that this season we'll be able to show we have a track record of safety," says Bryan Joseph.

To that end, he offers some advice to passengers: "Don't show up drunk. We're trying to have a good time, but we don't want to cause any commotion on the street."