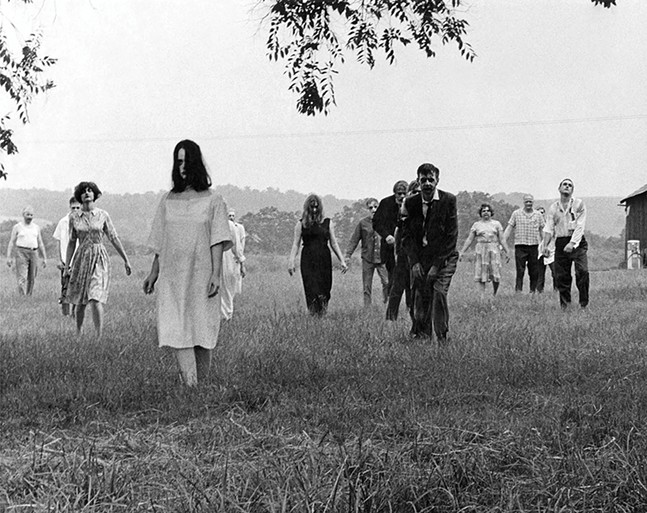 Film still: Image Ten, Inc.
Ghouls in Night of the Living Dead
When Night of the Living Dead shuffled into theaters in 1968, the Pittsburgh-shot film shocked audiences with its graphic violence and gore. Since then, far more bloody and gratuitous films have graced the horror genre in the U.S. and throughout the world (see, for example, the New French Extremism movement of the early 2000s). But apparently, the 50-plus year-old film is still too intense for audiences in Germany, which requested it be removed from the country’s Netflix streaming services.

The country’s opposition to Night of the Living Dead recently came to light in Netflix’s 2019 Environmental Social Governance report, the first-ever document disclosing the company’s “environmental, social, and governance (ESG) performance.” As first reported by Axios, the document includes a list of nine films the company removed from streaming services in various countries between 2015 and Feb. 2020. Among them is Night of the Living Dead, with the document stating, “In 2017, we complied with a written demand from the German Commission for Youth Protection (KJM) to remove Night of the Living Dead from the service in Germany only. A version of the film is banned in the country.”

The report never specifies which version of the film was banned. The film was created by Pittsburgh legend George Romero, and it has spawned an entire genre of zombie films.

Other films taken down include Full Metal Jacket in Vietnam and an episode of Patriot Act with Hasan Minhaj in Saudi Arabia. Singapore made a large share of the requests, with The Last Temptation of Christ, Cooking on High, The Legend of 420, Disjointed, and The Last Hangover all being removed from the country’s Netflix services.

Netflix added that beginning next year, the company will provide annual lists of titles it’s taken down.

KJM is described on its website as “the central supervisory body for the protection of minors in private radio and telemedia.” Using guidelines introduced in 2003 by the German Interstate Treaty on the Protection of Minors in the Media, the group investigates and regulates media considered illegal or too extreme for young German viewers, including online.

The ban seems a little odd considering that, in the U.S., Netflix has streamed a variety of German programming putting young characters in mature or distressing situations, including the supernatural series Dark, a series about a teen drug dealer called How to Sell Drugs Online (Fast), and Parfum (Perfume), a series about a brutal murder at a boarding school. Germany has also produced its own contributions to the zombie sub-genre, including, most recently, Endzeit (Ever After), a 2019 film about two women trying to survive an undead apocalypse.

Regardless, Pittsburgh horror fans should feel somewhat proud that this local gem has been officially deemed too terrifying by an entire European government.
© 2022 Pittsburgh City Paper