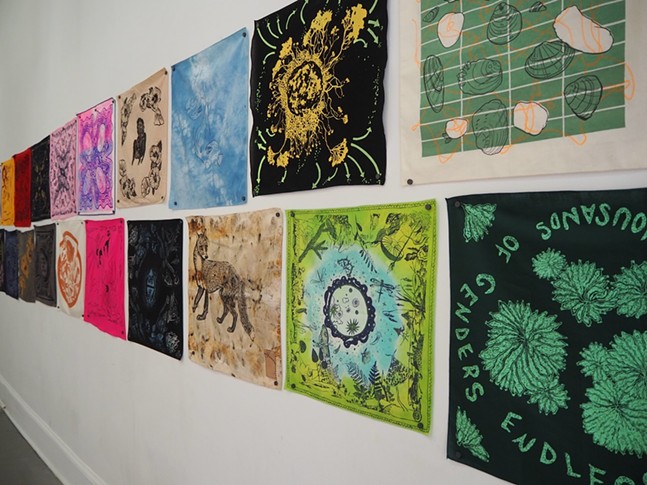 Photo: Mary Tremonte
Queer Ecology Hanky Project at the Irma Freeman Center for Imagination.
Animals, plants, and other organisms don’t live by the same code as humans, but that doesn’t stop us from projecting it onto them in restrictive ways. This is where queer ecology comes in, a concept over 90 artists are exploring through one unexpected medium: those little squares of cloth known as hankies.

“It’s looking at ecologies of queer humans, but also looking at non-humans species ... and how they work together in synergy to build networks and resilience, and looking at different ways of being that are not connected to this heteronormative, capitalist patriarchy,” says Mary Tremonte, a Pittsburgh artist and co-organizer of the Queer Ecology Hanky Project.

Set to open on Fri., Feb. 7 at the Irma Freeman Center for Imagination, the Queer Ecology Hanky Project showcases screen-printed hanky pieces from local artists, as well as from across the U.S., Canada, and Mexico. Kicking off during the First Friday Unblurred gallery crawl on Penn Avenue, the show - which runs through March 6 - begins a month of events dedicated to connecting and expanding ideas around queer culture and DIY artistry, including a queer craft fair and the return of Tremonte’s Sappho queer dance party.

Tremonte and Queer Ecology Hanky Project co-organizer Vanessa Adams believe that art focusing on queer ecology can help redefine the boundaries of sexuality and gender not only for the natural world but for humans. Adams lists examples, like how slime molds have infinite sexual partners, lichens have thousands of genders, and hyenas have ‘these super cool, complicated power-sex dynamics.”

One artist explores how, in the summer, salamanders “give each other handjobs in these ephemeral pools,” defying theories that animals pursue sex purely for reproduction instead of for pleasure.

While queer ecology may be a new concept to most people, it has existed for at least two decades, dating back to the publication of Bruce Bagemihl's book Biological Exuberance: Animal Homosexuality and Natural Diversity. Published around 1999, the book is seen as a seminal scientific work looking at homosexuality, transgender, and nonreproductive heterosexuality among mammals, reptiles, birds, and insects.

Adams' website also cites Peter McCoy’s book Radical Mycology: A Treatise On Seeing & Working With Fungi, which "explores the interdependence of mushrooms, mycelium, and other living beings to build sustainability and resilience."

Photo: Mary Tremonte
Queer Ecology Hanky Project at the Irma Freeman Center for Imagination.
The show also more narrowly takes into account the range of identities, genders, and preferences within queer communities. Tremonte, who works in hanky art through her own business, says the project draws upon and updates hanky code developed in the 1970s by cisgender gay men. Using this, gay men were able to signal their sexual preferences through color choice or by placing hankies on various parts of the body or in pockets.

“Younger contemporary queers have been kind of updating the idea of hanky code over the last decade or so, and so we’re drawing back to that lineage of gay communication and updating it for now and keeping it going to encompass different bodies and genders and proclivities,” says Tremonte.

As Adams points out, these two ideas sometimes intersect through artists using natural dyes and techniques to make their hankies.

But overall, Tremonte and Adams see the show as staying true to the ideals of the DIY arts scene, which they both work in. Artists lacking access to screen-printing tools were able to make their pieces in the Babyland arts collective space in Oakland. Each piece was also produced in multiples and priced to move (some as low as $10) so that anyone can buy and wear them.

“It’s really incredible to have such an affordable, accessible art show,” says Adams. “It’s very exciting for people and exciting for us.”