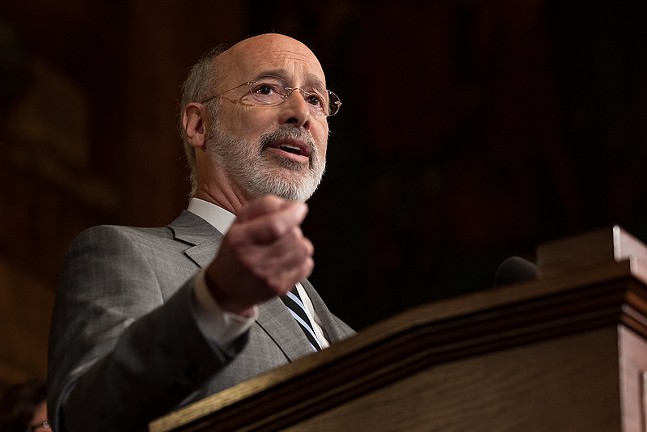 Photo: The Office of Governor Tom Wolf
Gov. Wolf at a press conference in January
This morning, Gov. Tom Wolf (D-York) delivered his annual budget address to the Pennsylvania General Assembly, touching on several subjects, from minimum wage to education funding. But he put a special emphasis on gun control legislation and funding for prevention programs.

In his address, Wolf urged the legislature to pass stronger gun control laws, including comprehensive background checks for gun purchases, red flag laws (which allow for the removal of guns from a person who poses a risk to themselves or others), making it a requirement for owners to report a lost or stolen gun, and to ban ghost guns (partially built guns sold without a serial number). He also urged new gun-storage requirements to prevent accidental shootings, school shootings, and suicides.

Last year, Wolf signed a bi-partisan gun-control law that requires convicted domestic abusers to turn in their firearms. But Wolf has consistently advocated for more and stricter efforts to curb gun violence, though many of those efforts have been stymied by state Republicans.

In his budget plan, Wolf proposed setting aside $6 million for gun violence prevention programs with the Pennsylvania Commission on Crime and Delinquency, and another $4 million for the Philadelphia Gun Violence Task Force.

In his speech, Wolf highlighted stories of gun violence in Pennsylvania, including gang violence, mass shootings, and suicide.

“I understand that unimaginable tragedy is part of life. But when it comes to gun violence, we have gotten to a point where these kinds of tragedies are no longer unimaginable at all,” said Wolf, adding that Americans have gotten used to byproducts of gun violence like bulletproof backpacks and lockdown drills. “And, unfortunately, we have also gotten used to hearing politicians offer their thoughts and prayers and little else.”

In October 2019, gun-control advocacy group Everytown released a compilation of data showing that gun deaths in Pennsylvania increased 18% from 2007-2017 (it increased 17% nationwide over the same period). The data also showed that 63% of gun deaths are suicides (compared to 61% nationwide). In Pennsylvania, Black people are 18 times as likely as white people to die from a gun homicide (compared to 10 times as likely nationwide).