It's a heartfelt elegy, expressed with the emotional restraint that prevails in contemporary art. 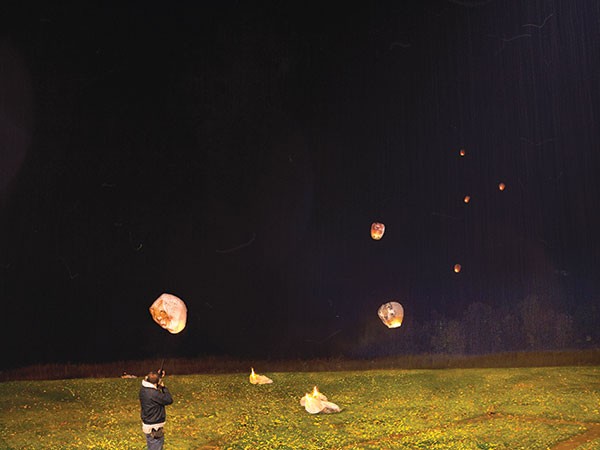 Oct. 18, 2011, was not a good day to be wandering near Zanesville, Ohio, especially if you were one of the 56 exotic animals released that day by their owner, who then committed suicide. Most of the lions, tigers, bears, wolves and mountain lions, and a baboon, were subsequently killed by public-safety-minded law enforcement. This tragedy moved Ryan Woodring, a growing presence on the local art scene, to embark upon a project memorializing the animals.

Woodring began by painting a portrait representing each of the 49 animals that were lost to the world. Displayed at eye level, each small circular painting confronts us with a direct, unthreatening gaze. The paintings were also scanned and digitally printed to produce paper lanterns used in a nighttime performance at a remote location where they were released and shot down, as documented in a series of photographic prints that form the other major aspect of this exhibit. (A video documenting the performance is also on hand.)

The photographs have a somber quality, with lanterns and the occasional shooter seen against expanses of dark foliage and drizzly night sky. The combination of night, rain, motion and distant subjects can make things difficult to decipher, and it's not self-evident what the relationship is between the animal portraits and the nighttime performance, not to mention the original incident. Explanation is called for, and some is provided in an artist's statement, though I Googled the story to fill in details.

Woodring has created a project that cuts across boundaries, including those of medium and style. His feel for the tragedy is evident, even though there's no blame assigned. By using a multi-stage process which relies more on lyricism and intuition than logic, he conveys a sense of his inspiration rather than facts or his specific response: Little is said about lax exotic-animal laws, the culpability of animal-hoarders, the motivation of the owner who freed them, or the necessity of killing the animals. It's a heartfelt elegy, expressed with the emotional restraint that prevails in contemporary art.

The Inn is the latest iteration of (occasional City Paper contributor) Sarah Humphrey's College Inn Project, which migrated from Shadyside to Bar Marco in the Strip and now to Lawrenceville. This first exhibit signals that there will be room for the unexpected.