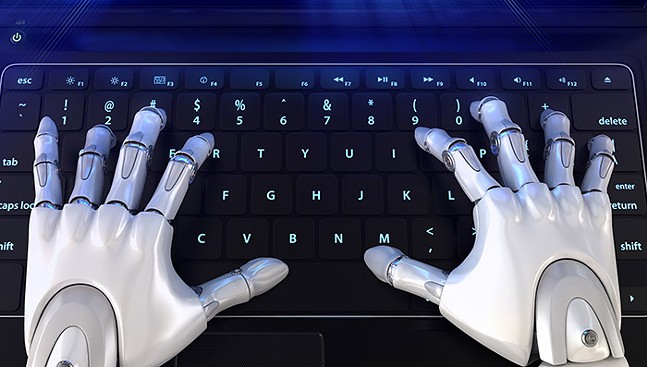 We know tweet "trollbots" aren't really robots, but it makes for good art. (Robots are nicer, though.)
Since announcing his congressional run against U.S. Rep. Conor Lamb (D-Mt. Lebanon), Republican candidate Sean Parnell has made quite a splash.

Even before he announced, Parnell received a shoutout from President Donald Trump at the Shale Insight natural gas conference in Pittsburgh. Trump then officially endorsed Parnell on Wednesday. Before his run, Parnell was well known as an Army vet, author, and Fox News contributor.

All this attention has led to online praise, mostly from conservatives. And when someone praises Parnell or announces they have donated to his campaign, he tends to thank them in a tweet or retweet their posts.

But several of these accounts retweeted or thanked by Parnell since the announcement of his run have been classified as trollbots.

According to Bot Sentinel, a website and app meant to combat organized groups manipulating the conversation on social media, trollbots are “human-controlled accounts who exhibit toxic troll-like behavior,” and some of them “frequently retweet known propaganda and fake news accounts, and they engage in repetitive bot-like activity.”

Since Oct. 30, Parnell, of Cranberry, has either retweeted or thanked in a tweet six accounts that Bot Sentinel ranks as “alarming” on its trollbot meter. This includes thanking one account with a trollbot rating of 77% on Wednesday.

One of the more alarming accounts Parnell thanked is titled “DM CSW Super Elite Deplorable#KAG #MolonLabe” and has a trollbot rating of 81%. This account recently called the Democratic-controlled House a “NAZI HOUSE.”


Thank you so much. I will ALWAYS stand by the people of Western Pennsylvania & America first, last & always.
I will always work hard to earn your support & fight like hell to protect freedom
The grassroots support I’ve received is a true blessing that I don’t take for granted. 🇺🇸 https://t.co/xSGxLkmPhz

Some of the other accounts Parnell has retweeted include handles like "lightning7876" and "americanride724."

The Parnell campaign didn't respond to multiple requests for comment for this story.

Parnell has more than 81,500 followers on Twitter, and most of his tweets are shared dozens of times. (Some are even shared thousands of times.)

In addition to boosting the message of accounts that are prone to spread fake news and harass other accounts, Parnell also retweeted an endorsement from Jack Posobiec, an alt-right conspiracy theorist who was instrumental in spreading the debunked Pizza Gate conspiracy theory that falsely claimed Hillary Clinton was running a prostitution ring out of a Washington, D.C., pizza restaurant. 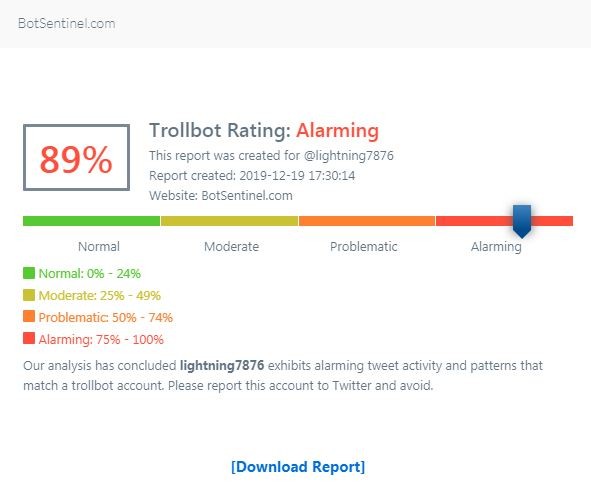 Screenshot taken from botsentinel.com
Twitter account lightning7876's trollbot rating
Posobiec also has several white nationalist ties, like once praising white supremacist Richard Spencer (he later denounced this) and hiring Jeffrey and Edward Clark to create a documentary about the murder of Seth Rich, a young Democratic National Committee employee who is also the subject of alt-right conspiracy theories. Jeffrey Clark, who once said the victims of the Tree of Life shooting "deserved exactly what happened to them and so much worse," was arrested by the FBI on gun charges in 2018.

It’s safe to say that most of Parnell’s retweets are from non-troll accounts, but in addition to the six “alarming” trollbot accounts he retweeted, there are also several accounts Parnell has retweeted that don’t classify as an “alarming” trollbot, but are considered “problematic” by the website.

Bot Sentinel has also tracked trollbots' ability to get topics trending on twitter, even if those topics are more partisan in nature and occur less organically than a significant news event. Recently trollbots successfully got #DemocratsAreDestroyingAmerica to trend on Twitter.

Compare Parnell's interaction with trollbots to that of Conor Lamb’s personal account and the differences are stark. Since the beginning of October, Lamb has retweeted or tagged several accounts on his feed, but none of them are considered trollbots by Bot Sentinel.
© 2022 Pittsburgh City Paper