Pennsylvania gets a “D-” grade for economic development transparency 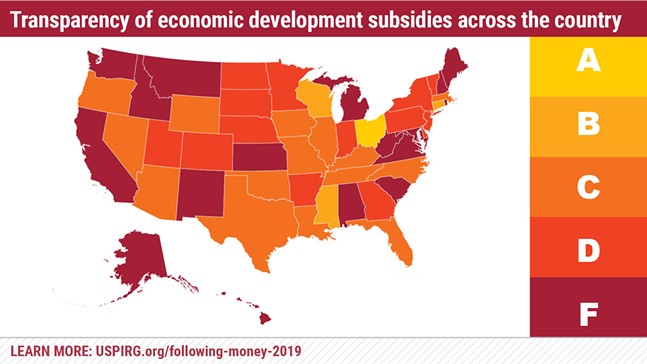 A recent report from U.S. PIRG and the Frontier Group gave Pennsylvania a “D-” for online economic development subsidy transparency.

Economic development subsidies are a form of public spending given to companies in the form of credit, cash, tax exemptions, or other similar benefits in exchange for helping develop local economies through investment or job creation. Both U.S. PIRG and the Frontier Group conduct research to educate voters and craft new policies with the hopes of improving democracy and civic participation.

Currently, economic development subsidy reporting is so poor in Pennsylvania that there is no sufficient record of how many of these programs might exist, nor the dollar amount being spent on them. A study from 2011 estimates local and state in the commonwealth subsidy spending could equate to around $70 billion annually.

The report “Following the Money 2019” ranks how each of the 50 states performs in making economic development spending information readily accessible online. The report says transparency allows citizens and public officials to address when subsidy programs fail to meet their goals.


We should be able to see how our state governments spends our money on economic development subsidies. Check out our report w/ @FrontierGroupUS: https://t.co/L1qbMP102V pic.twitter.com/M4xnwvm2NL

Recently, Amazon was criticized by local labor leaders and area Democrats for failing to use local contractors when building a new fulfillment center in Findlay Township.

U.S. PIRG’s report reveals 17 states received an “F” for failing to meet basic transparency standards. Pennsylvania was among the 14 states that received a D for providing access to the information online but in a way that is neither “comprehensive” nor “readily accessible” to citizens.

Of the top 10 state scores, only four were scored a “B-” or higher, with Ohio receiving the highest scoring, an “A-.”

Local leaders also came under criticism last year for failing to disclose the region’s bid for Amazon HQ2. The bid was reportedly the country’s largest at $9.7 billion, and despite calls from the public and requests from the media, leaders didn’t release the full package until after Amazon announced Northern Virginia and New York City for HQ2.

State laws on tax expenditure reports, grants, online portals, and public records were all considered in U.S. PIRG’s ranking. Pennsylvania has pre-existing laws in three out of four of those categories but fails to meet the requirements for an online portal law. Only partial credit was awarded to the commonwealth for its grant reporting laws since there is not an annual statewide record of grant reports.
© 2023 Pittsburgh City Paper