"The expansion needs to be responsible."

Photo by Heather Mull
The Hydzik family, who live on Fisk Street, oppose the Thunderbird expansion

On a recent Thursday, staff at Lawrenceville's Thunderbird Café methodically carried high-top tables out of the bar.

They were making room for that night's act — funk band Turkuaz — who would later perform on the Thunderbird's mezzanine level stage. The venue, which has been around since 2000, has become a home for a variety of music — from local and national blues and roots music, to indie rock and the weekly Space Exchange jazz series.

That popularity and a current space crunch, says owner John Pergal, is the reason he and his wife, Ami, are pursuing a $3 million development project to consolidate several properties in the block between 41st Street and Almond Way along Butler Street. The plan would create a new two-story building that will house an expanded Thunderbird, raising the venue's capacity from 246 to 600, and a new three-story building that would hold a restaurant kitchen and residential units above.

"The issue we have now is it gets so crowded we can't even do a good job for our customers," he says. "It's a good problem to have, but we need to expand."

Pergal says the idea is to create a "supper club" for 300-400 customers with live shows three or four nights a week. The current Thunderbird encompasses 5,500 square feet; the new facility would be 8,900 square feet.

"I didn't buy this place because I wanted to own a bar," says Pergal, a musician. "I do it for the love of live music."

But not everyone in Lawrenceville is singing the same tune. Some, like Pittsburgh City Councilor Patrick Dowd, worry that Pergal isn't pursuing the proper city-code variances for the project.

Residents who oppose the project say it will only exacerbate problems with parking, noise and disruption the neighborhood already experiences. They have been collecting petitions to present at a community meeting April 3 and to the city's Zoning Board of Adjustment, which will hold a hearing April 11 on Pergal's application for zoning variances and exceptions for the project. As of press time, residents had collected 173 signatures from opposed residents living within 500 feet of the bar.

"[There are] already people leaving drunk, shouting," says Joy Snyder, who lives on Eden Way behind the bar. If the expansion went through, she says, "any value I have on my modest house would just be gone."

"A lot of people are trying to paint it as something it's not," Pergal says. "But I've done nothing but put everything I own into Lawrenceville."

Over the years, Lawrenceville has transformed into a haven for artists, architects, developers and businesses attracted to the charming and architecturally unique row houses that line the streets. Much of that development — including the growth of Thunderbird into a neighborhood institution — and proximity to assets like the park, library and restaurants, is what attracted residents like Snyder, Allison Hydzik, Hal Medrano, Molly Stephany, Lynne Glover and Lynn Lewandowski — all of whom live near the bar and oppose the expansion.

"We understand it — we live in a vibrant neighborhood," says Lewandowski. "But the expansion needs to be responsible." Lewandowski and Hydzik both live on Fisk Street, which runs perpendicular to the bar and to Butler Street, which positions them to see much of the unattractive side of the neighborhood.

Chris Lasky, vice president of Massaro CM Services LLC and designer/consultant on the plan with Pergal, says that planners are aware of neighborhood concerns and want to work with the community. They say it's not fair to pin neighborhood problems solely on the Thunderbird, pointing out that the bar takes patron and resident safety seriously and uses, for example, a door-person who makes sure patrons don't leave with drinks.

Problems on Butler Street, Pergal says, "could be from any bar." The current proposal, they say, includes tree shields and fencing to mitigate noise, and parking options. The club plans to lease two lots for valet parking on 38th Street.

But the residents, and Councilor Dowd, worry about the building's capacity to hold such a large crowd — and the environs' ability to deal with more traffic, noise and people as a result.

"You can't fit a 600-pound canary into a two-foot bird cage," says Medrano. "That's the issue — trying to expand capacity."

"If they try to skate around and avoid the actual facts or actually calling things as they are, then it becomes very difficult to have a conversation. More importantly, it becomes difficult to reach a compromise," Dowd says. "That's where you have standoffs in communities."

Pergal's application to the zoning board of adjustment requests two variances for parking, special exceptions for offsite parking and to expand under the zoning classification of "restaurant general." But Dowd and others question if that's the proper use, arguing that the applications should be for what's known in zoning code as  "public assembly," which encompasses structures used for "spectator sports, entertainment events, expositions and other public gatherings" — and Dowd says is prohibited in residential neighborhoods.

Lasky and Pergal say the uses and exceptions they applied for in the zoning code are correct and just an expansion of their current approved use.

"The idea that we are putting in a dance club or [large assembly facility] is just not accurate, and hopefully, those who have concerns will understand more accurately what we are doing through the community meeting Wednesday night," Lasky says.

Lasky and Pergal also reject the assertion that additional patrons would create the same kinds of problems faced by the South Side, which has more than 100 active liquor licenses. Lawrenceville has approximately 35 liquor licenses.

"The idea that Butler Street cannot handle the people is a fallacy," says Lasky. "Fortieth [Street] and Butler is one of the busiest intersections in the city, and the busiest in Lawrenceville. If you take the property that we are combining for this development, we could [legally] put in separate [facilities] that together would equal and go beyond what we are proposing for the development."

City zoning officials deferred comments about the zoning application to City Zoning Administrator Susan Tymoczko, who was out of the office and could not be reached by press time. The Zoning Board of Adjustment will hold a hearing on the proposed variances and special exceptions on April 11, and Lasky says the panel could take three to four weeks to issue a ruling. An appeals process could follow, if necessary. Lasky and Pergal say that a best-case scenario would allow them to break ground in August, with five to six months of construction to follow.

Lasky says Thunderbird's owners are also participating in the neighborhood's efforts with community groups Lawrenceville United and Lawrenceville Corporation, and the Responsibility Hospitality Institute, which has contracted with the city to develop a plan to manage nightlife. 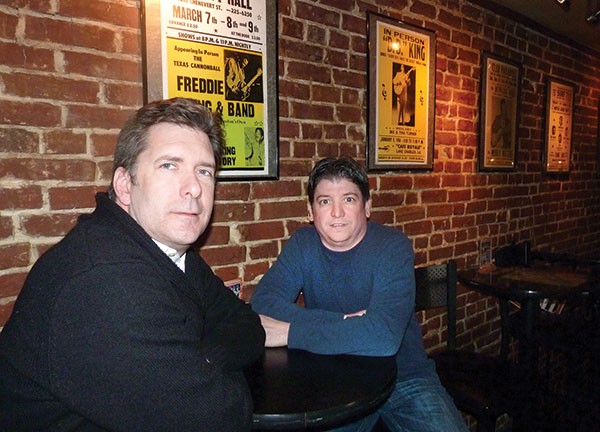 "There are some people who live in the neighborhood because they went to the Thunderbird. They like it and consider it an asset to have," says Lauren Byrne, executive director of resident-advocacy group Lawrenceville United. "We aren't hearing many people say, ‘We hate it' or ‘We want it to go away.' They value it but want to mitigate any issues of quality of life from expansion."

Pergal's company approached the community groups a year and a half ago with his expansion plans, and at the time the plans "were much larger," says Matthew Galluzzo, executive director of the Lawrenceville Corporation. Galluzzo says Pergal has been responsive to concerns about the size.

But to some residents, any expansion of the space to bring more patrons to a bar for loud music is too much. Some say they are prepared to move if the expansion goes through.