Target Practice: Mayor says he's not a target in a federal investigation. Does that mean he's out of the woods? | Pittsburgh City Paper

Target Practice: Mayor says he's not a target in a federal investigation. Does that mean he's out of the woods?

"Just because someone is not a target today does not mean that they won't be one tomorrow." 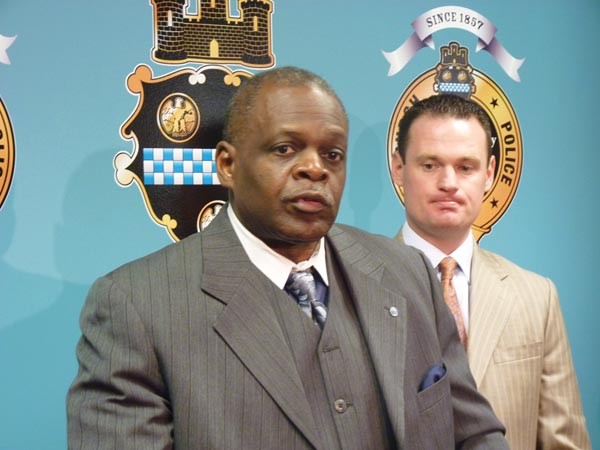 Mayor Luke Ravenstahl wanted to make one thing very clear last week at a Feb. 20 press conference announcing the resignation of Pittsburgh Police Chief Nate Harper. Although a federal investigation of the Bureau of Police was taking place, he said, "I am not a target."

For Pittsburghers alarmed by recent headlines, that was a notable reassurance. News reports have been filled with stories about Harper's business ties to members of the police force — and to an acquaintance, Arthur Bedway, who has pled not guilty to falsely representing his firm as women-owned in a bid to get a city computer contract. (A former city employee has pled guilty to charges related to the matter.) Ravenstahl himself has not been untouched. Questions are swirling about the reported deposit of public money at a police credit union, which issued debit cards to members of Ravenstahl's security detail, among others.

Which raises the question: How much comfort should Pittsburgh — or Ravenstahl himself — take from being told he's "not a target"?

It would be unusual for investigators to press charges against someone they've told is not a target, says University of Pittsburgh law professor John Burkoff. That's "an assurance that has to be good right now," Burkoff explains. "There is a great likelihood that [Ravenstahl] wouldn't become a target if everything stays the same and nothing startling emerges from the investigation."

But investigators can change their minds.

"Just because someone is not a target today does not mean that they won't be one tomorrow," says James Wedick, a 34-year veteran of the Federal Bureau of Investigation who specialized in white-collar crime and public corruption.

"I've found that people like to hang on those words, ‘I am not a target,'" Wedick adds. "But in a lot of cases, we're still trying to figure out who the targets are. So it might be too early to start getting that warm and fuzzy feeling on the inside."

Ravenstahl's Feb. 20 press conference was carried live by local media outlets, and at the outset, listeners might have thought Ravenstahl's meeting with investigators had been more like a briefing than an interrogation.

"I have been informed by the U.S. Attorneys that I am not a target of the investigation," Ravenstahl said. "I would like to answer all of your questions, but please in advance understand that I cannot endanger any ongoing investigation by specifically discussing what information I have learned or discussions that I have had."

But under questioning by reporters, Ravenstahl acknowledged that he was asked questions by the FBI and was accompanied by a lawyer for the city and a personal attorney (whom he would not name). And Wedick says that if Ravenstahl was brought in for questioning, it "means he's somehow part of this investigation. Whether that's as a witness or a future subject of the probe remains to be seen."

Especially in cases like this one — where those involved might have reputations that could be hurt by a rumored investigation — "Agents keep their information close to the chest," Wedick says. According to Wedick, the FBI is not in the habit of briefing individuals, even the mayor of a city in which an investigation is ongoing, "so if they met with the mayor, it wasn't to provide him information. I think the public should know that."

When the feds descend on government agencies, it's not unusual for elected officials to publicly insist they are "not a target." And frequently, charges aren't ever brought against them.

"There are consequences to being told you're not a target," says Pitt professor Burkoff. One of those consequences, he continues, is that a non-target isn't told of his or her Fifth Amendment right against self-incrimination. That, he says, may hamstring investigators who want to press charges down the road.

Still, Burkoff allows, "Sometimes, like a jack-in-the-box, things can pop up." And investigators can change their minds. For instance, former Illinois Gov. George Ryan was told in 1998 that he wasn't a target of a bribery investigation, yet was charged in the widening scandal five years later.

Nor are the feds obliged to notify an individual if they do change their minds.

According to the federal manual used by United States Attorneys, a prosecutor "is encouraged to notify [a target] before seeking an indictment in order to afford him or her an opportunity to testify before the grand jury." But that is not a requirement, and the manual notes cases in which "[n]otification would not be appropriate" — including cases in which there was a danger of destruction or fabrication of evidence, or when notification might "be inconsistent with the ends of justice."

Regardless of what an FBI investigation might show, says Paul McCauley, a professor emeritus of criminology at Indiana University of Pennsylvania, Ravenstahl bears some responsibility for the problems at the police bureau, even if he isn't criminally culpable.

"When we talk about what happened here, and the chief entering into an agreement or forming a company for outside work, there has to be policy guidance for all department heads," says McCauley. "The police chief doesn't write his own criteria. That is the responsibility of the mayor."

Ravenstahl's foes in the upcoming mayoral election, City Controller Michael Lamb and City Councilor Bill Peduto, have been making similar arguments. Lamb has called for Ravenstahl to release information about the debit cards used by his bodyguards; Peduto has been urging residents to "connect the dots" about allegations of misbehavior.

But for now, at least, it's not clear that recent events have hurt the mayor's re-election prospects.

On Feb. 21, the day after he announced Harper's departure, Ravenstahl faced a mostly friendly crowd at a Democratic committee event at Sunnyside Elementary School in Stanton Heights — the neighborhood Harper himself calls home. Several attendees professed to be more worried about neighborhood development and crime then about Harper's fate.

"Whatever the mayor did, he did on the information he got from the FBI," surmised East Liberty resident Louise Johnson.

Those in attendance included some city workers like Jeannie Byrne, who works as a secretary for city Public Works Director Robert Kaczorowksi. While she said of Harper that "I always feel that everyone is innocent until proven guilty," she added that "At this point, the mayor made a good decision" by removing him.

Others in attendance said the revelations at the police bureau have troubled them. The controversy "has made me feel differently" about the election, said Dolores Sands, an undecided voter from Stanton Heights. "The mayor isn't under investigation, but there might be some kind of legal issue that he's not telling us about. I just want them to get to the bottom of this."

During a Q&A session with the audience, Ravenstahl was asked whether he thought the department needed more oversight. "The issues you're reading about and seeing ... are not the result of a lack of oversight," he answered. "They are a result of folks that decided to do things they shouldn't have done," he said.

And while he pledged that the city was reviewing procedures, he added, "I don't know that there's anything ... our administration could have done differently."

Editor's note: An original version of this story misstated Arthur Bedway's plea in a case involving his firm.