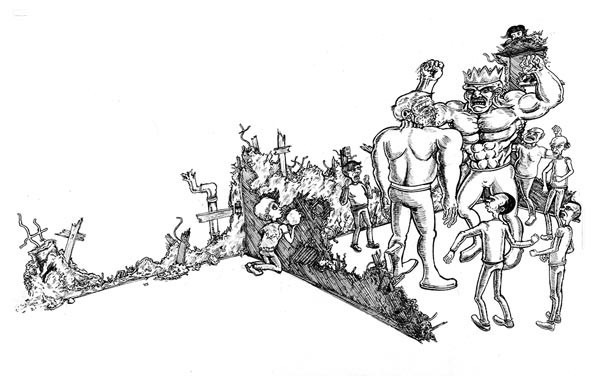 When Caleb Pogyor finished the rough mixes for his new EP, he immediately sent them to Nate McDonough, a comic artist and illustrator. Newly released, Terra comprises seven songs and a booklet of McDonough's illustrations. Unlike Coheed and Cambria's sprawling epic (see main feature, "Coheed and Cambria sets a soundtrack to comic mythology"), no single narrative unites Terra; to Pogyor, it's "more of a poetry book of visuals."

Pogyor, a West Newton native, debuted as a singer-songwriter in 2010, releasing I'm Talking to You. When he began Terra, in early 2012, he focused on character-driven songs over autobiography.

"I tried taking friends' stories, writing from their perspective," says Pogyor, and derived imagery and ideas from his meditation practice. The situations he describes can be extreme, such as "Land of the Free" — a Nick Cave-influenced song narrated by a paranoid killer.

Pogyor and McDonough met while working at the Pittsburgh Public Theater, soon realizing they shared a similar creative work ethic. McDonough self-publishes a comic called Grixly, volunteers at Polish Hill's Copacetic Comics Company, and has collaborated on illustration projects including a graphic novel.

Terra "is definitely Caleb's thing," says McDonough, but the collaboration "felt like a natural thing." He enjoyed working within the project's constraints, and developed his visual ideas while listening to the music; "it's different listening to songs looking for imagery," he says.

For "Terra Revisited," McDonough brings the lyrics to life: "a vacant house / no sheets to make a bed / where you rest your dizzy head." In others, like "Streetwalker," his oblique references create "something lonely and desolate, surreal."

"I was always a fan of looking at the booklet while listening to the music," says Pogyor. For listeners, they hope the Terra package "shows we took some time."

Terra is available for free download on Pogyor's Bandcamp page (calebpogyor.bandcamp.com), and includes the comic book as a PDF. A limited physical edition will also be available.