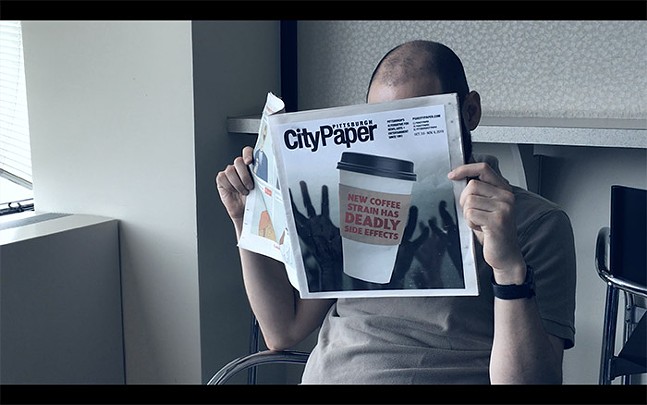 Ben Korman reads a fake Pittsburgh City Paper in Mini Dungeon's short zombie film Jocelyn's Best Day Ever
I dare you to think of a more appropriate location for a zombie movie than the halls of a dying industry. But since George Romero already claimed American shopping malls as his own, improv comedy team Mini Dungeon grabbed the next best thing: the thriving, absolutely not-dying-at-all offices of your favorite print media company, Pittsburgh City Paper. (No, seriously, we hear good things!)

It didn’t hurt that the writer and director Josie Norton, a member of the Arcade Comedy Theater’s "Max Team" since its formation in 2017, is also a graphic designer at CP. She took advantage of our paper’s template and built the newspaper into the film, announcing the dangers of a new coffee strain with “DEADLY side effects” on the fake alt-weekly cover.

“I’m obsessed with cheesy zombie movies and have been insisting we do a horror-themed event for months,” says Norton. “Eventually the others got on board with it.”

Jocelyn’s Best Day Ever is about as ridiculous as you'd expect from a sketch comedy troupe. A CP conference room becomes a coffee shop, and the eight members of the sketch group — Norton, Ben Korman, Kat Caringola, Nicole Havranek, Jocelyn Hillen, Ryan Very, Kevin Flinn, and Marc Rattay — have replaced the regular occupants of the office cubicles. It’s not unlike a typical day here: overworked writers walking with their hands extended towards the office Keurig and, of course, that one chatty Kathy (every office has one, amiright?)

It took six hours to shoot the film, according to Norton, and didn’t come without its own horrors. She unplugged the fridge in the break room because its noise was obstructing the recording, and then after she went home, she realized she forgot to plug it back in.

“I had to run back to the office, panicking about all that yogurt and hot dogs going off,” she says. (Check this story to read up on what hot dogs she’s referencing; and yes, if you're curious, they're still in there.)   The fun five-minute film will be featured during the troupe’s horror-themed variety show Night of the Living D at 8 p.m. on Fri., Nov. 1 at Arcade Comedy Theater. The night will also include sketch comedy, long- and short-form improv, games, and some additional interactive bits, according to Norton. The designer also created the artwork for the event poster: an amazing illustration of an oversized zombie thumb about to crush minuscule cartoons of all eight comedians.

But as cute as it sounds, Norton warns parents to avoid bringing really small kids. “There will be some gory imagery and scary bits.”
© 2023 Pittsburgh City Paper