REVIEW: CorningWorks' The World As We Know It at New Hazlett Theater | Pittsburgh City Paper 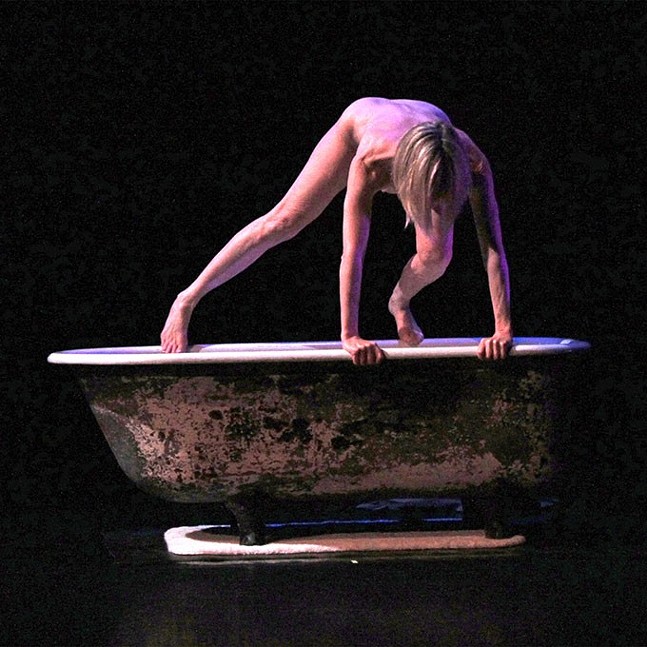 
There's a certain liberation that comes from seeing a woman "of a certain age" stand on a theater stage completely nude.

We see dancer and choreographer Charlotte Adams' fingers first, then her legs, during her performance of “Imagining Ketchikan,” where the artist gracefully, and boldly, dances inside, on top of, and around a bathtub on the stage of New Hazlett Theater.

Adams is one of six featured performers “of a certain age” in CorningWorks' production of The World As We Know It. (That "certain age" is over 45, thanks to CorningWorks' founder Beth Corning, who also appears in this production, whose The Glue Factory Projects series celebrates “nationally and internationally critically acclaimed performing artists over the age of 45.”)

As a woman very close to being of that "certain age" myself, seeing Adams sit on the edge of a bathtub, with her exposed naked back facing the audience, felt freeing. "Yes!" I felt myself screaming inside. "Yes! Women 'of a certain age' can and should be seen!" Her age not a factor; her thin, athletic body unapologetically exposed.

"Yes!" I felt myself screaming inside. "Yes! Women 'of a certain age' can and should be seen!"

But Adams’ performance doesn't focus on sexuality, at least not in the ways one might expect of a nude woman on stage in 2019. It's bare, raw, honest. She has merely shed her skin — in this case, an exaggerated oversized, ill-fitting pastel suit which all six of the dancers wear, and remove, numerous times throughout the evening.

The performance has been heavily advertised as "an original and bold take on #MeToo and the proverbial glass ceiling," but modern dance theater can often be left up to interpretation by audience members. Most of the performances are quiet, intimate moments that feel voyeuristic, watching from afar. During the night I attended, the audience was dead silent throughout most of the evening, the quietness broken up only a few times by laughter. (There is humor mixed throughout, especially during Corning’s lively performance of “I set the table. Always,” where the seasoned performer dances the parameters of a dining table, switching characters every few seconds.)

Also breaking up the silence is a soundtrack, dancers paired occasionally with beautiful strings, which verge on the edge of becoming haunting. There's also some dialogue, dancers often speaking during their performances, like Li Chiao-Ing in her incredible “In medias res,” where the speech comes through almost as a stutter as she struggles to climb to have a seat at the top of the proverbial table, a visual that returns numerous times throughout the evening; the lighting, as in most appearances at New Hazlett Theater's intimate stage, was exceptional.
The #MeToo theme comes through most on pieces by Simone Ferro and Endalyn Taylor. In “the quiet,” choreographed by Mauriah Kraker, Ferro’s arms move like windmills, each winding around and around in circles, faster and faster, appearing as if they're trying to fight someone away, until it becomes hard to look at. A similar discomfort comes in “Is All,” choreographed by Sarah Hook, where Taylor’s beautiful movements, mixed with thrusts and heavy breathing, come with questions from knowing the show's theme. Is she enjoying the moment or, perhaps, reclaiming it as her own?

Rounding out the six performers is Jillian Hollis, replacing original choreographer/performer Heidi Latsky, who is recovering from a hip replacement. Hollis’ youthfulness stands out on a stage full of “women of a certain age,” but in this case, it works perfectly into the storyline; the older women, welcoming her into the group after she too, sheds her skin and joins them in breaking through the glass ceiling and taking a seat at the table.

At the very beginning of The World As We Know It, as audience members entered the theater, four of the performers stood just inside the door, two at each entrance, dressed in those ridiculously oversized pastel suits. “Hi, welcome! Can I give you a hug?” they asked. Most were visibly taken aback by the request, but everyone I witnessed, including myself, accepted. “Thank you for coming,” they said after the hug concluded. It was almost as if the audience members were also given a chance to shed their skin.