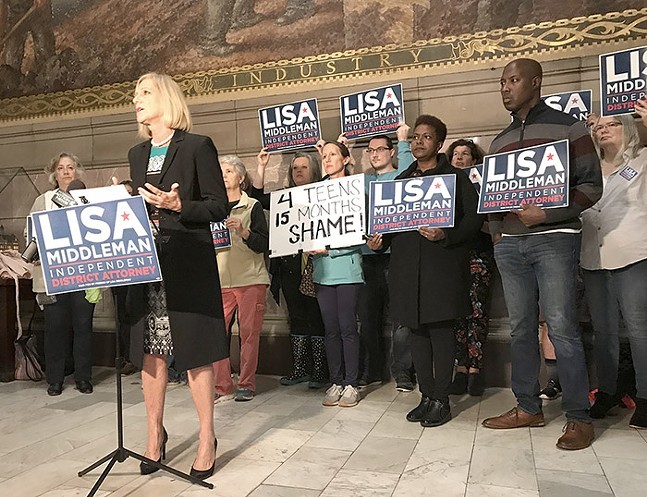 CP photo: Ryan Deto
Lisa Middleman speaks at a rally at the Allegheny County Courthouse on Mon., Oct. 7.
Something unusual is playing out inside the Democratic Party in Allegheny County.

Bethany Hallam is one of those outliers. The Democratic nominee for Allegheny County Council At-Large District and a Ross Township Democratic Committee member has been publicly supporting Middleman, despite the fact that Allegheny County DA Stephen Zappala secured the official Democratic party endorsement.

Zappala has held that office since 1998 and has been criticized for his approach to the job, like his role in surveilling county residents using hackable cameras and his plan to use GPS technology to track people accused, but not convicted, of crimes once they leave the Allegheny County Jail. For Hallam, this is what drew her to Middleman's reform-minded campaign, which supports things like ending cash bail and being more transparent in racial disparity data.

“He is also interested in using GPS technology to better track people ACCUSED of crimes once they leave the Allegheny County Jail and believes that will prevent crimes.” Uh, WHAT? https://t.co/fBzKSp9uoX via @PittsburghPG

However, Hallam says the email sends mixed signals in the next paragraph. It reads that support of non-Democrats would lead to “not a removal but a suspension to any members in violation.” It goes on to say that as long as those committee members are supporting non-Democrats, they “will not be invited to meetings or privy to any conversations or matters concerning the party," and that support for candidates that violates the bylaws “may also lead to further action,” including removal from the committee.

Hallam says the email is too ambiguous, which is “bad news for the Democratic Committee.” She dislikes the language that hints members could be removed from committees, since some members are elected officials. She says many committee members already incorrectly believe they can be removed for not supporting endorsed candidates.

But she knows firsthand that this isn't true, because members tried to remove Hallam in 2018 when she was supporting Sara Innamorato against Dom Costa, who won the Democratic party endorsement that year. But she appealed and was ultimately kept on the committee.

And while the language of the email notes that support for non-endorsed Democrats is in violation of committee bylaws, the suspensions would only last until the election.

“It gives us all free reign to do whatever we want," says Hallam.

Jim Burn, solicitor for the Allegheny County Democratic Committee, disagrees with Hallam's assessment and says the email was meant as "a reiteration of a fundamental tenant of the state party bylaws." He also says that bylaws are during the primary campaign are less strict from the general since all candidates in the primary are Democrats. He rejects Hallam's comparison.

"This is a reminder that there are elected Democratic nominees to support and committee members have an obligation to carry out the duties of the Democratic party," says Burn.

He says Kelly and other chairs, including himself for a period in the late 2000s, have periodically sent reminder emails like this. Burn downplays any movement among committee members to support non-Democrats.  He says that 90 to 95 percent of committee members already understand their role to support Democrats.

Even though Allegheny County committee bylaws don't mention consequences for supporting for non-Democrats, Burn says that state committee bylaws are binding on county committees. The state bylaws say no one is eligible to serve as a member or officer of any Democratic committee if they voice, vote, financially support a candidate in a general or special election opposed to the duly nominated candidate of the Democratic Party, with the exception of cross-filed candidates.

Darwin Leuba, Middleman’s campaign manager, isn't taking the message this way. He wrote on Facebook that members can support Middleman with only minor repercussions.

“BREAKING: You will not be automatically removed from the Allegheny County Democratic committee if you publicly support Lisa Middleman,” wrote Leuba on Facebook on Oct. 12.

Burn says these actions leave members vulnerable to official complaints, which then will be vetted and can lead to removal from the Democratic committee.

"I think I see people up in arms because this rule hasn’t always been enforced, but this chair [Kelly] will enforce it," says Burn.

He worries this message could have disastrous effects on the structure of local and state Democratic committees and reiterates that filing charges of supporting non-Democrats is necessary for the party structure.

"If no one files on you, if it goes unaddressed, that could set a precedent of the beginning of the end of the institution that represents Democrats. In 2020, the Democratic party is going to be responsible for the soul of this nation," says Burn, referencing the possible re-election of President Donald Trump. He worries that stepping out of line with Democratic endorsements could lead to "'Democrats for Trump' support within committees."

Hallam says this email and the number of committee members backing independents reflect deeper problems in the county Democratic party. She notes that Democratic candidates like Olivia Bennett and Turahn Jenkins didn’t even seek the party’s endorsement earlier this year; Bennett won her election anyway.

“The committee has gotten so out of touch with the actual members of the party, the community members,” says Hallam.

Hughes claims Zappala is campaigning solely to Republicans, and that is why she and some South Hills committee members are pushing for Middleman.

In August, CP reported about how Zappala met with the Young Republicans of Allegheny County.

Zappala has been endorsed by the Allegheny-County Central Labor Council and was endorsed by the Steel City Stonewall Democrats in February. On Oct. 12, he met with voters in Bloomfield and Aspinwall, and according to the Pittsburgh Post-Gazette, Zappala criticized Middleman, saying she is “not an independent, she’s a Democrat. Quite frankly, if you meet her, you’re not going to like her.”

Hughes says the email sent by Kelly is emblematic of why she has avoided trying to join the Allegheny County Democratic Committee, despite being extremely active in helping to get local Democrats elected.

Regardless of the ambiguity of the email, McCandless Democratic committee members Kathleen and Tom Prigg say they are still openly supporting independent candidates like Middleman. Kathleen Prigg says she’s impressed by Middleman’s empathy.

“I went to a meet-and-greet and was so impressed by her wealth of knowledge, but also how she listened to everyone who was there,” says Kathleen Prigg. “This is the type of person that we need for our next DA, someone who is empathetic and is also very genuine.”

Zappala, the endorsed Democrat, skipped out on a McCandless Party meet-and-greet in July, the same event that Middleman attended. Zappala eventually returned to meet with McCandless Democrats, but Tom Prigg, who ran unsuccessfully for U.S. Congress in 2018, says he wasn’t satisfied with Zappala’s answer to a question about the proliferation of plea bargains in the criminal-justice system. Tom Prigg says it was much different when he met Middleman.

“Not only did she address that issue, but a few more that were big concerns of mine without me asking the question,” says Tom Prigg. “She just fired off some big problems that she wanted to change. They were perfectly in-line with my own.”

In the end, both Kathleen and Tom Prigg think the party endorsement system should change. “There are many ways that people win an endorsement beyond [being] ‘the best candidate,’” says Tom Prigg. “Who are we to say who is actually the best candidate? We should support the people we believe in.”
© 2023 Pittsburgh City Paper