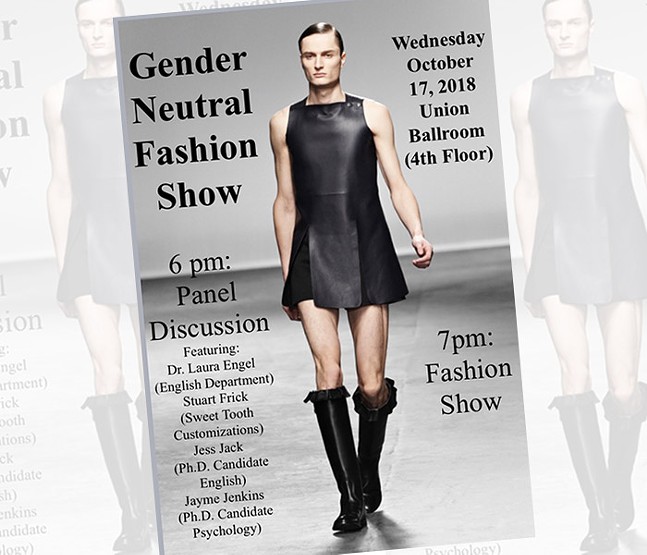 Last year, the Department of Women and Gender Studies (WGS) and the Gender Forum group at Duquesne University held its first-ever gender-neutral fashion show. The event was promoted with a flyer featuring a male-presenting model wearing a dress and knee-high boots; according to the Duquesne Duke, the student newspaper, a WGS professor said the 2018 event was the best-attended WGS event she had seen.

So, naturally, the department thought to follow a similar playbook to market this year's show, but then university officials got involved and told WGS to refrain from using gender-neutral language or photos of models in gender-neutral clothing in posters for the event.

“It blindsided all of us,” Gender Forum president Emma Shirey told the Duke. “No one had said anything about it being problematic.”

Duquesne University is a private Catholic school. University officials issued a statement to the P-G saying that the university hasn’t canceled the fashion show but did confirm it made requests about marketing for the show, writing that officials sought to determine the “promotional materials are not designed in a fashion that will unnecessarily offend others.”

This action on part of the university comes a year after Duquesne hosted a first-of-its-kind conference to examine the importance of the First Amendment.

In a 2018 op-ed for the Pittsburgh Post-Gazette, Duquesne University president Ken Gormley and Pittsburgh Foundation president Maxwell King wrote that the conference was a “collaborative initiative centered in Pittsburgh [that] intends to inspire citizens themselves to stand up for their rights.” One of the goals of the conference was to get students across the country to be “able to recite all five of its freedoms — the right to free speech, press, religion, assembly, and petition — by heart.”

Given those statements and the fact that the WGS didn’t hear direct complaints last year about the fashion show and its posters, the involvement of the university in this year’s event is perplexing. But Duquesne officials have defended the action as a way to uphold the university’s Catholic standards.

“No matter what group seeks to use university resources for programming, Duquesne University has consistently required that it show respect for the Catholic religious identity of the institution,” the university statement read. (Full statement can be viewed below.)

School officials also claimed that posters for 2018 fashion show garnered numerous complaints. The Duke reported on how some complaints might have come from the Pittsburgh Catholic Diocese.

Ann Rodgers, a spokesperson for the dioceses, told the P-G that Catholic leaders didn’t instruct Duquesne University officials on what actions to take, but referred complaints about the gender-neutral posters to the university.

”The diocese referred the complaints to the university out of concern that the event, as advertised, did not reflect Catholic teaching on gender,” wrote Rodgers in a statement. “Our Catholic faith teaches that gender is a gift from God.”

But, when controversy surrounded Duquesne during its First Amendment conference last year, the teachings of the Catholicism didn't make their way into the defense.

One of the guests at the First Amendment conference was Project Veritas CEO James O’Keefe, who’s best known for attempting to deceive the Washington Post and lying to Post reporters in claiming a Project Veritas staffer was impregnated by Alabama U.S. Senate candidate Roy Moore. (According to the New York Times, in 2010, O’Keefe and others also pleaded guilty to misdemeanor charges of entering a federal office under false pretenses in a scandal involving Planned Parenthood.)

When O’Keefe’s inclusion at the conference drew criticism, Duquesne president Gormley defended the decision, telling City Paper that “While we may not always agree on the issues of the day, one of the pillars of the First Amendment is that we all have the right to express our views.”