The one-woman show is just a big, fat, evening of bliss. 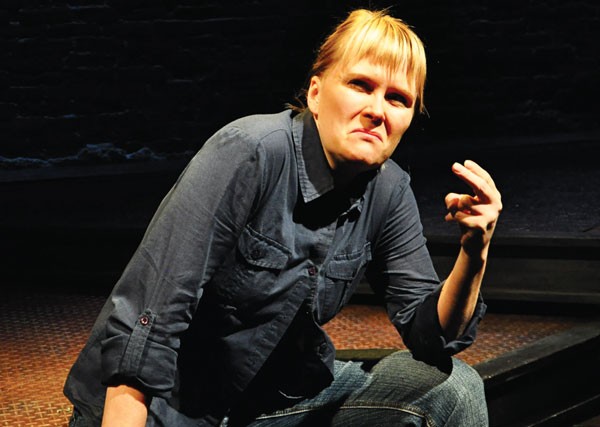 Photo courtesy of Suellen Fitzsimmons
Tami Dixon, in character, in South Side Stories, at City Theatre.

Once word gets out, I seriously doubt there'll be many left to go around, so right now put aside this review and get as many tickets as you can for South Side Stories. The new work written and performed by Tami Dixon makes its dazzling premiere at City Theatre.

Dixon has been coaxing residents of Pittsburgh's South Side into telling her the stories of their lives. With assistance from director Matt M. Morrow and dramaturge Carlyn Aquiline, she's woven them into a one-woman show that's just a big, fat, evening of bliss.

I can't remember the last time I was so captivated, so enthralled in the theater. Dixon's known as a powerhouse performer, so her delicately and indelibly etched characters are no surprise, directed to crystalline point by Morrow. But South Side Stories is her first foray into playwriting, and I am set back on my heels by the surety and adventure of her writing.

And I was a little nervous going in. Too often — and I'm as guilty as anyone — there is a great deal of condescension aimed toward "yinzers." Dixon is not a native, so I was worried she'd miss the desperate authenticity of Pittsburgh lives and living.

Boy, was I wrong. She summons a huge array of locals without a whiff of irony or remove, and we get an intermissionless 90 minutes of hardscrabble nobility and, for lack of a better word, "realness."

She doesn't present these people as museum pieces we're meant to admire for their plucky working-class honesty. Rather, she's created full-blooded, full-bodied humans who couldn't care about your patrician admiration.

Since I'm sure this piece is going places, I would make one suggestion for the revision process: Dixon's added a framing device from one of her own South Side experiences. It may be the "truest" of the stories she tells, but oddly it feels the most false. The poetic, intensely confessional tone calls attention to itself and feels grafted onto everything else.

I close out by mentioning the perfectly styled projections provided by David Pohl. And I urge you to go get tickets – if there's any left.