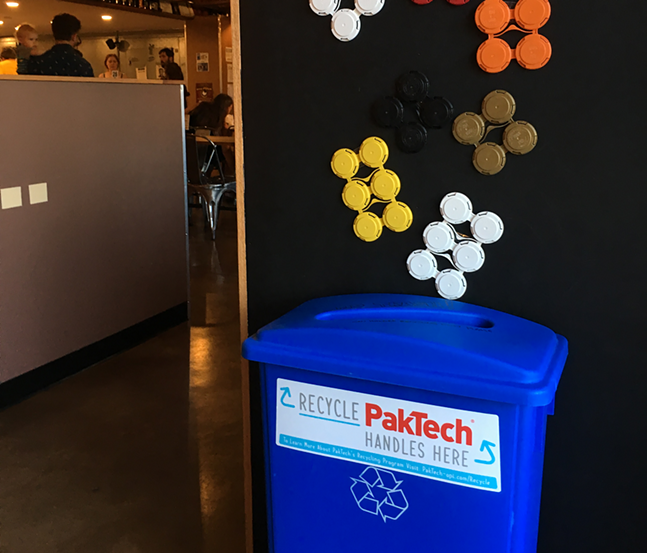 On Twitter and in a newsletter, East End informed customers of the recently launched on-site collection bins at its Larimer location, placed there to collect the hard plastic carriers used to package its craft brews. The bins are picked up by its carrier supplier, PakTech, an Oregon-based, family-owned company specializing in recyclable plastic products.

“We’ve only had the collection bin out for a couple of weeks now … but so far, we’ve gotten a great response,” says Scott Smith, founder and owner of East End.

East End marketing manager, Matthew Buchholz, says that they reuse the bulk of the returned carriers, but send them back to PakTech if they are damaged or the wrong color. Once picked up, the carriers are ground up by PakTech and used to make new carriers. As a result, Smith says, all East End carriers are made of 100 percent post-recycled material.

To further simplify the process, PakTech also improved the design of the carriers to prevent breakage every time a can is removed, which makes them more reusable.

Smith adds that, since East End started canning their beers almost five years ago, figuring out what to do with the used six-pack holders has been a problem. The issue becomes more complicated by the lack of viable recycling options in Pittsburgh, where the city has struggled to figure out ways to improve its single-stream recycling approach as garbage piles up and, much of the time, ends up in the landfill anyway.

Some areas have even seen services dwindle, such as in the South Hills, where it was announced that glass would no longer be collected by Waste Management in over a dozen neighborhoods starting on Jan. 1, 2019.

“With the changes happening in the recycling world … we were about to start our own collection program here when PakTech came out with an even better one,” says Smith.

Smith believes the recycling partnership with PakTech benefits East End in a variety of ways.

“We still have to go through the returns and retire any that are unusable to us, but it’s a small percentage so far and doesn’t take too much staff time,” says Smith. “And it beats introducing fresh, albeit recycled, material to our process. But the best part is, the fact that we can send them straight back to PakTech contributes to our zero waste goals here at East End Brewing. And that feels great.”
© 2022 Pittsburgh City Paper